Driving across the prairies of Saskatchewan, there is a hypnotic effect to the open horizontality of the landscape. Subtle features in the countryside that would normally pass unnoticed become welcome visual accents here. Copses of trees, the rhythmic pattern of overhead power lines, and shiny steel grain bins become objects of contemplation and curiosity.

Punctuating this scenery are agricultural sheds and barns situated on the land like dice on a board game. Multiple generations of these buildings are on display: classic gambrel-roofed red barns, half-domed Quonsets, and contemporary pre-engineered steel sheds. While the materials and shapes vary, these simple structures share a total adherence to functionality in their design. The question of form versus function is not even part of the conversation: they’re simply the same thing.

This is the landscape that surrounds Swift Current, in the southwest part of the province. The Roman Catholic congregation of Christ the Redeemer church sits just outside of the small city, amidst the gently rolling hills of the prairies—and it shares a design ethos with its pragmatic agrarian neighbours.

The parish moved to this site from a downtown location in the early 2000s to accommodate a growing congregation. They took over a former car dealership, with large interior spaces, ample on-site parking, and plenty of land for a future addition. In 2015, they commissioned P3 Architecture Partnership (P3A) to design that addition, meant to accommodate a new sanctuary and support spaces.

When the architectural team arrived on site, they found the original dealership structure largely unchanged by the parish. Except for a large cross on the roof, all the renovation work was to the interior and most of it had been completed by church volunteers. P3A principal James Youck describes the dealership-come-church as a great example of Prairie ingenuity: “It’s a rural mentality where you count on yourself and on volunteers. You say, ‘Let’s take something and be inventive and be flexible, and figure out how to make the best use of it.’ A tractor breaks down, and two neighbours get together and weld a piece of steel to it and keep going.”

From the outset, the client wanted the largest possible space for a limited budget. With this in mind, the architects chose a pre-engineered agricultural building system as the basis of their design. Working within the constraints and opportunities of this pre-determined kit-of-parts, project architect Brad Pickard devised a diamond-shaped floor plan, with a central roof spine. 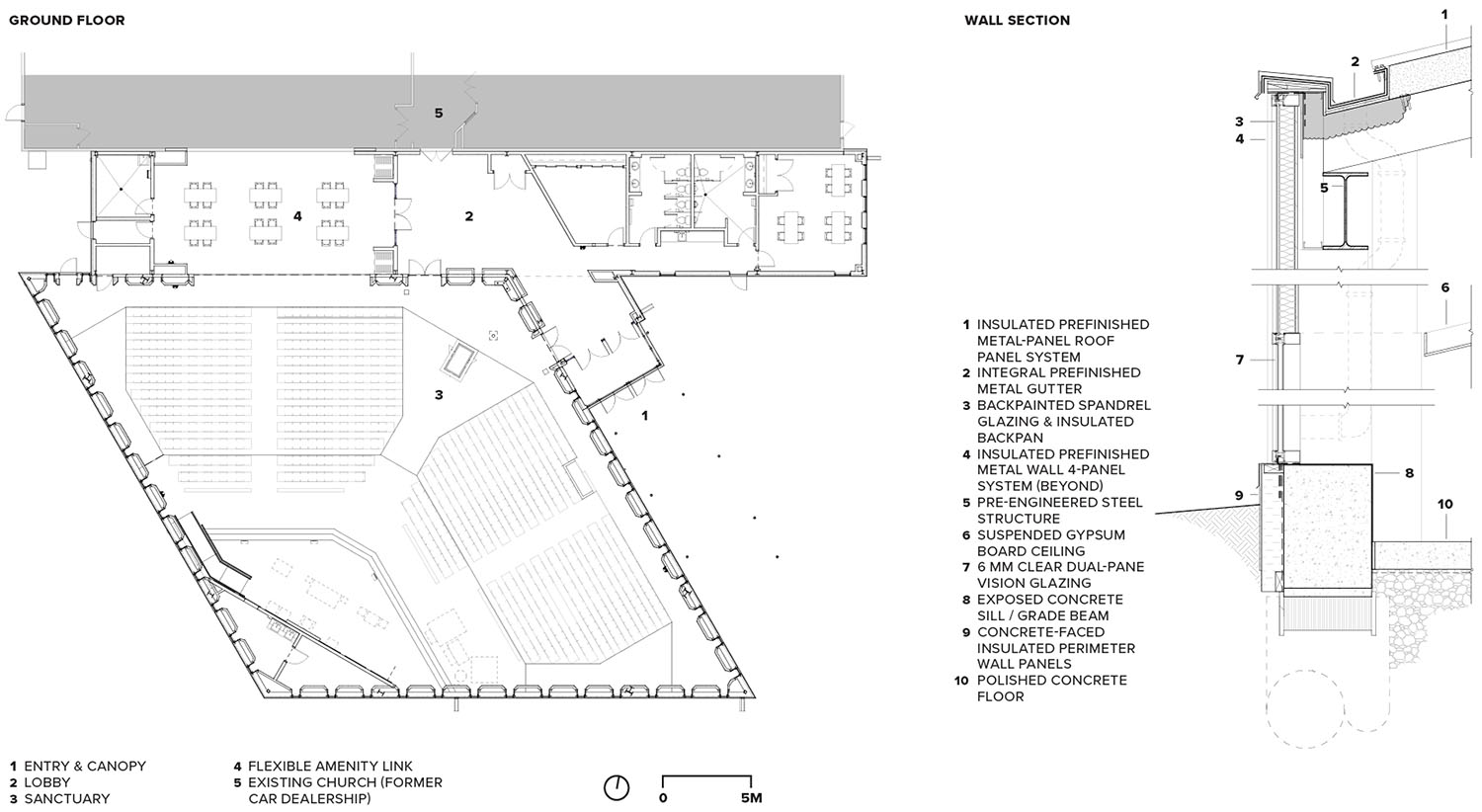 The client was on board with a pre-engineered building, but they didn’t necessarily want it to look like one. From certain angles, the sanctuary is similar to its pre-engineered cousins. Moving around it, though, the nature of the geometric shifts and the obtuse shape of the building start to play with one’s perspective. The tight vertical lines of the glazing further define the building’s character. “For me, it was about the formal relationship of the traditional agricultural shed in the landscape, and how it’s this singular object in space,” says Pickard. “When we’d drive into Swift Current, I would see all these commercial ag-sheds—for some reason, they had ornamental vertical painted lines on the corners. This was one of the starting points for the window rhythm on the exterior.” He adds, “There’s a sense that the building fits within this landscape because of its relationship with these commercial sheds.”

Closer up, the resemblance to industrial buildings fades further as bespoke detailing reveals itself. The finer pedigree of the sanctuary’s architecture is evident in curtain wall glazing that goes right up to the roof edge, carefully articulated detailing in the steel wall panelling, and a concealed rainwater system. The addition makes a clear break with the old car dealership. A new linking wing bridges the scale of the new and the old, and serves as the entrance to the complex as a whole.

On the inside, the continuous vertical windows result in bands of light punctuating the sanctuary space.  To maintain consistency with the exterior and to hide distracting ductwork and structure, P3A interior designer Meghan Campbell connected the vertical windows with a series of banded drywall ceiling bulkheads. Overall, it creates the impression of a singular idea of bands wrapping the space. “It looks so simple, but it was really complicated,” says Campbell.

At the threshold of the sanctuary, there is a sense that one is entering a vessel. This notion is reinforced by the raked floor slab that gently slopes down towards the altar. The continuous banding suggests a modern re-boot of Gothic architecture, where the eye can follow a single rib from the floor to ceiling and back down again. Like its stone counterparts, Christ the Redeemer’s exterior walls are thick: drywall build-outs between the windows hide structure and are chamfered inward, further shaping the light coming into the room. The thickness lends a sense of bulk and permanence to the ordinarily thin walls of a pre-engineered structure.

The architecture of this church is unapologetically modern, dispensing with many of the symbols traditionally associated with Christian places of worship. “Our starting point was an old car dealership—it set the tone,” says Pickard. “I think this allowed us more freedom.” The few traditional elements that do exist in the buildings—such as the repurposed wood pews, central altar and the large lit cross on the building’s exterior—take on an elevated meaning against the otherwise minimalist architecture. And while short on literal iconography, the space exudes a sense of sacredness, faith and community.

In the wide-open Prairie landscape, it sometimes feels that we are drawn to the modest structures of barns and sheds because of the absence of other visual landmarks. Yet these modest structures also possess an undeniable beauty. There is a straightforward confidence to these elemental structures as they appear in this stillness. Christ the Redeemer Church similarly captures the spirit of this place. “Saskatchewan can be quite conservative at times, but that also drives innovation,” says Pickard. “It’s interesting how people can be so open-minded to ideas—if they are the right ideas.”