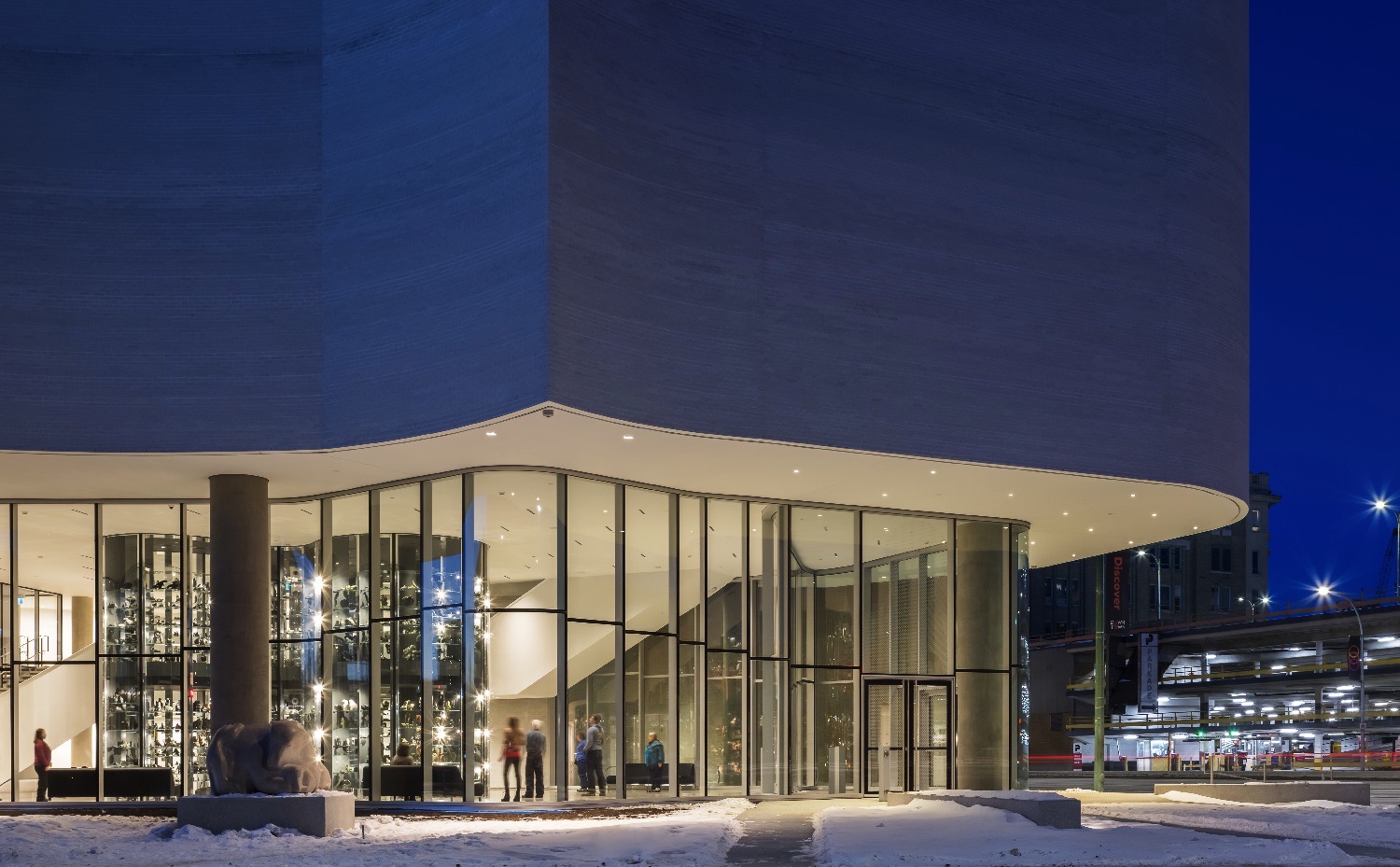 A billowing white building, like an icy cloud, has descended on the Prairie landscape. Mooring itself to an urban site, it reflects the long, glancing sunlight of the Prairie while also catching another kind of light: the midnight sun of Canada’s North.

In architect Michael Maltzan’s words, the North’s cultural and physical geography is one of “ineffable qualities […] where the water shimmers away and melds with the sky.” For Maltzan, that geography enjoys a specific “quality of light […] that animates all the forms there.” 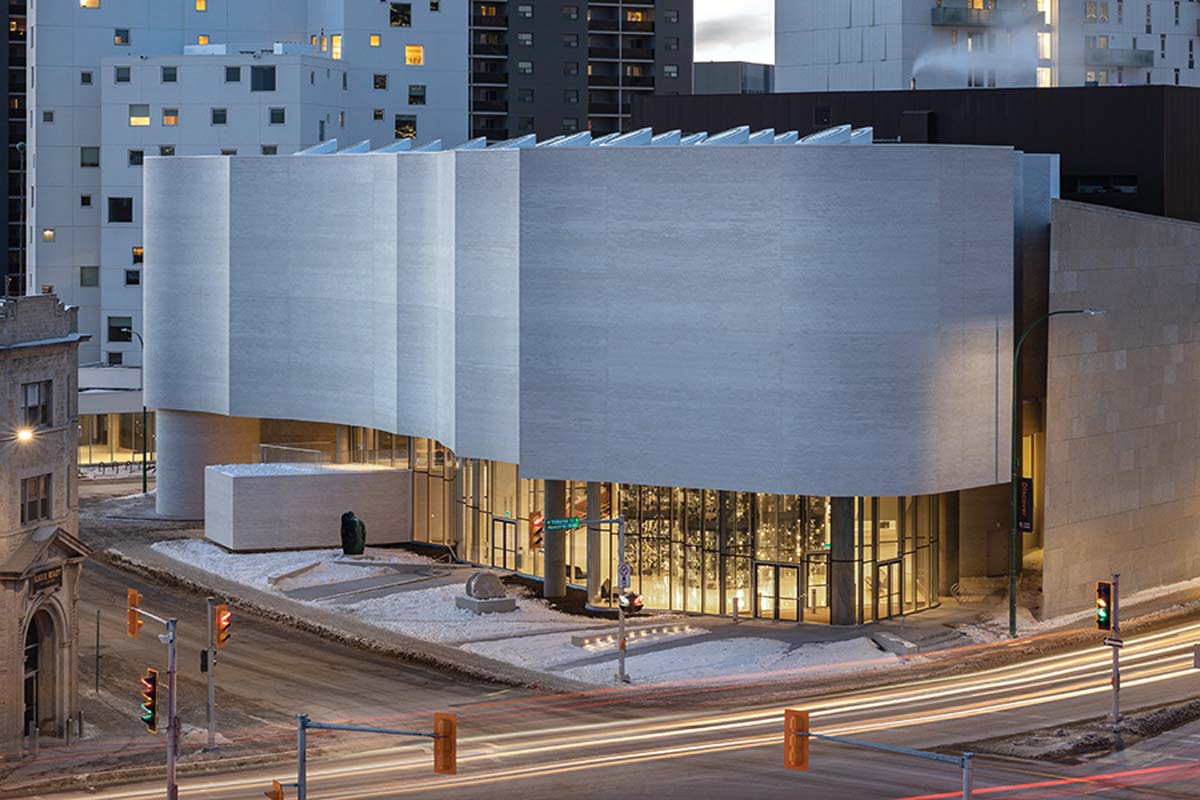 This focus on light is also captured by the name of the new building: Qaumajuq, Inuktitut for “it is bright, it is lit.” This name was chosen by a circle of Elders and advisors, as part of a broader selection of Indigenous names for the institution and its component elements—including an Ojibway name for the Winnipeg Art Gallery itself, which sits adjacent. It’s just one of the ways that Qaumajuq’s impact ripples beyond its architecture.

The architecture itself makes a memorable impact. At night, light shines through the glass wall of the double-height entry area. A stone wall hangs like a curtain above, as though lifted up to let the museum glow, not unlike the light of a qulliq: a seal oil lamp. The undulating façade also suggests the curtains of aurora borealis which sweep across the northern sky. The wall has become a frequent screen for light and video projections, amplifying the effect at night.

Lifting up the façade lets light out, but also lets the city in. In this, the new design mitigates one of the shortcomings of Gustavo da Roza’s 1971 Winnipeg Art Gallery (WAG) building. While the crenellated profile of Da Roza’s towering walls starkly and beautifully underlines the wide Prairie sky, those same walls shut out the city at the ground level. The addition of Qaumajuq—perhaps better termed an “augmentation”—opens up da Roza’s hermetically sealed building to the street. Events and the art held inside Qaumajuq become visible, parts of street life. Rather than a rebuke, the new design reads as a complement to the original. Maltzan speaks with utmost respect of da Roza’s building; he has described his own work as “trying to make an extraordinary object that completes an extraordinary object.”

The geometries, too, are complementary, and seem to splice distinct geographical conditions.

In 2013 Maltzan and associate architect George Cibinel visited Nunavut’s Pangnirtung, Cape Dorset, and Iqaluit, along with WAG Director and CEO Stephen Borys, Curator of Inuit Art Darlene Coward White, and photographer Iwan Baan. This experience of the northern landscape had a tremendous impact on the design. Its scalloped and curved forms speak of waves, ice floes, eskers, and the curve of drifting or melting snow. But rather than formal mimicry, Maltzan was interested in the North’s inimitable qualities of space, light, and immense scale relative to settlements there. He describes striving for an architecture which was similarly endless, whose “edges and endpoints are more ambiguous.”

This creates a striking juxtaposition to the angular architecture of the WAG. Da Roza’s building exemplifies a Prairie architecture of long horizontals, colliding colonial infrastructures, and materials hewn from the earth. Maltzan and Cibinel’s is set off from those angular walls by a crevasse, as well as by its curved forms.

Material choices help in the marriage of the two. The old WAG is clad in local Tyndall stone. Mottled by fossils, the colour of that limestone varies with the cast of the sky and angle of the sun—from cloudy grey, to cream, to honeyed gold. The Bethel White granite of Qaumajuq’s façade is similarly responsive, appearing crisp or warm depending on time of day and, one anticipates, the time of year. The small size of the stone modules accentuates the feeling of great scale conveyed by the repeated, subtly varied curves of the wall.

If the original WAG takes a somewhat confrontational approach to its context—its cliff-like, stony façades exacerbate the gap-toothed urbanism that is an oft-criticized characteristic of Winnipeg—Maltzan, for his part, expresses a fascination with Winnipeg as an urban environment. He is recognized for projects such as MoMA QNS and Inner City Arts in LA, built in what he describes as “transitional middle landscapes”: places that are somewhere between urban and suburban, with damaged or absent centres. This is an apt descriptor for Winnipeg. For Maltzan, these environments present an opportunity to create places of exchange between cultures and individuals.

Early in the design process, Maltzan posed provocative questions to WAG Director Stephen Borys. What is a museum’s role in the urban environment? How quickly can we bring visitors to the art? What are the thresholds and barriers that keep people out of the gallery? How does the WAG see Inuit pieces in its collection—as ethnographic artifacts, or as works of art? Borys and Julia Lafreniere, WAG’s Manager of Indigenous Initiatives, were already posing similar questions, particularly in the wake of the Truth and Reconciliation Commission of Canada (TRC)’s report. The WAG’s evolving mandate and program were being conceived in direct response to the TRC’s Calls for Action for Museums and Archives. Qaumajuq, in particular, had to respond to the legacy of a collection which, at its inception, had colonial roots.

This critical examination of program clearly drives the resulting form, yielding an architecture that strongly connects with the city. The 3,345-square-metre building is packed with spaces dedicated to Inuit art, a lecture theatre, research areas, as well as a café, gallery shop and rooftop teaching workshops (the latter shuffled over from the original building). With Qaumajuq’s arrival, the WAG now fills its city block, and its impact extends beyond. Maltzan and Cibinel Architecture are working together on a new multi-family residence—itself an innovative array of block-like elements—across Colony Street to the west. Cibinel is involved in developing a second building, along with urban design ideas, for the same street. In a clear rebuke, this stretch of Colony has been renamed Paashchipew Way: meaning “natural flowing waters” in Michif, a Métis language with roots in Cree and French. Qaumajuq’s ground level is effectively public space, and Borys’s long-term vision is to make the original WAG’s west façade permeable to Paashchipew, extending the openness of Qaumajuq through much more of the existing building.

Qaumajuq is an excellent model for that kind of integrative urbanism. Space truly flows, from street to lobby, to lecture and performance space (which can be made visible to the street), and from there to the double-height main exhibition hall, named Qilak (Inuktitut for “sky”). The fluidity of these spaces led to a set of design and detailing challenges for Maltzan and Cibinel, who needed to resolve their vision of crisp, curvaceous forms and glowing surfaces into built form.

The design of the transparent display vault is one example of how this has been convincingly achieved. Unusual among art galleries, the permanent collection at Qaumajuq consists largely of stone artifacts which are resistant to light, allowing for open, long-term display. Maltzan used this to advantage by proposing a cloud-like “visible vault” of curved glass and steel in the building’s entry area. This particular cloud is massive: it carries 37 tons of artifacts, which the curators intend to redistribute periodically.

To maintain a feeling of lightness, the artifacts sit within an array of steel and aluminum verticals in a play of orientations, with elegant caps and muntin details. From a distance it shimmers; as one approaches, the visitor feels as though entering an ocean of floating stone forms. The sculptures are experienced directly, unlabelled and without curatorial comment. The three-storey vault rises from the basement through a two-storey entry area that is effectively public space. There is no charge to enter the lobby, and from it, visitors can see a significant part of the collection, as well as glimpse the work of curators below.

The wide, double-height lobby posed significant challenges for structural engineers Guy Nordensen & Associates and Crosier Kilgour & Partners: it’s visually open to the street on one side, with an undulating stone façade above, offset at the end of a five- to six-metre cantilever. In addition, the galleries above are curved and irregular, which meant that columns could not be simply set on a grid. The solution was a full-moment connection system that works in multiple axes: immense circular section steel columns allow for structural connections at any angle needed. All this cleverness is hidden behind the gallery walls, whose depth (averaging 80 cm) serves another purpose: they help this organic space breathe. Many of them act as conduits drawing air from the ceiling of Qilak, which itself serves as the plenum of the ventilation system.

The HVAC system is finely calibrated, as required in any art gallery, and offered its own challenges. Qilak is lit by deep circular skylights, providing a suffused light evoking that of arctic landscapes. To avoid condensation in the deep wells created by the oversized ceiling plenum, careful detailing ensures that the triple-glazed skylights are washed with dry air. Another example of clever design is the use of wall bases as air returns—yielding dark gaps that provide mysterious, if at first unnoticed, glimpses into the depth of the wall.

All of this ingeniousness serves a building that operates on multiple layers, from the experiential to the social. While WAG has long supported community programming, the new architecture more fully supports that mandate. It enables an expansion of the gallery’s mission to engage the community—and particularly, the Indigenous communities of Winnipeg and the province. In Winnipeg, more that 90,000 people, including 1,300 Inuit, identify as Indigenous. Many of them trace personal and family ties to reserves and rural communities; the building’s condition of being in two places at the same time might be seen as speaking to that experience, too. The building’s opening ceremony, which involved Inuit Elders, representatives of the First Nations of Manitoba, and the Métis nation, made clear that Qaumajuq’s stewards see it as Inuit space on land other Indigenous nations have made available to them. Settler culture is secondary to that relationship.

The building is a tribute to the support role architecture can play: its formal magic is grounded in an authentic engagement with the principles of reconciliation, with a social mandate, and with the landscapes of Winnipeg and the North. Perhaps it is even more appropriate, then, that three of the installations in the opening exhibition, INUA, recreate vernacular architectures: a shipping container, a domestic interior and a hunting cabin. The exhibition reads not unlike a northern settlement, with clusters and constellations of small objects beneath a vast sky. Daringly, Quilak is designed as a relatively large-scale gallery space, for a permanent collection of relatively small artifacts—another example of inspiration from the experience of being up North. Time will surely show that this is an architecture strong, soft, and supple enough to accept radical interventions of all scales. For now, seeing architecture sensitively curated at the heart of this remarkable work of architecture is something from which we can all take hope.

Our coverage of Qaumajuq continues with a review by Inuk architecture student and exhibition designer Nicole Luke.

Letter to the Editor: Contract Fairness

Book Review: Voices of the Land—Indigenous Design and Planning from the Prairies