WINNER OF A 2022 CANADIAN ARCHITECT AWARD OF MERIT

“This project represents a simple adoration of a by-gone era with an appropriate level of adornment. The syncopation of the fenestration in the intervention pays recognition to the past, referencing the old brick façade, and yet the project still manages a degree of autonomy, important for a hopeful and different future. The simplicity of the project, including the understated furnishings and interior detail, are appropriate: they do not betray the history of the place, yet offer a level of finesse fitting for the intended users of the Ateliers. Delightful without kitsch.” – Peter Hargraves, juror

Located inside the brick-and-steel shell of the Locoshop Building’s southern portion, Les Ateliers Angus offers an imaginative transformation of a decommissioned industrial site in Montreal.

The Angus Shops complex, once part of the railway network originally run by Canadian Pacific Railway, consists of several buildings used for manufacturing train components. This includes the Locoshop Building, an industrial shed that has since been converted into studios, offices, and stores. The linearity and rhythmic nature of the railway operations inspired the addition of a project running parallel to the historic façade’s massive brick wall.

Les Ateliers Angus is a series of craft studios, made of twelve lightweight units assembled in a continuous strip. In keeping with the historic use of the site, the project accommodates light-industrial uses by professional artisans, from cabinetmakers to potters. The studios front a large, open-air hall, activating it as a public space.

Each 56-square-metre unit includes a semi-public space on the ground floor for exhibitions, paired with a private mezzanine loft. A large, operable skylight brings in diffuse daylight and allows for natural ventilation. Units can be combined to maximize flexibility for occupants. Facing the public hall, floor-to-ceiling glazing transforms the studios into a series of tableaux vivants, showcasing the activities within and inviting a spontaneous theatricality.

The proposal includes the conversion of the existing parking area, facing the new Ateliers, into public space. The new workshops will be built alongside the freestanding brick wall; from the south, views are framed by the façades of both the existing and new structures. The space in-between new and old will be animated by people coming and going. 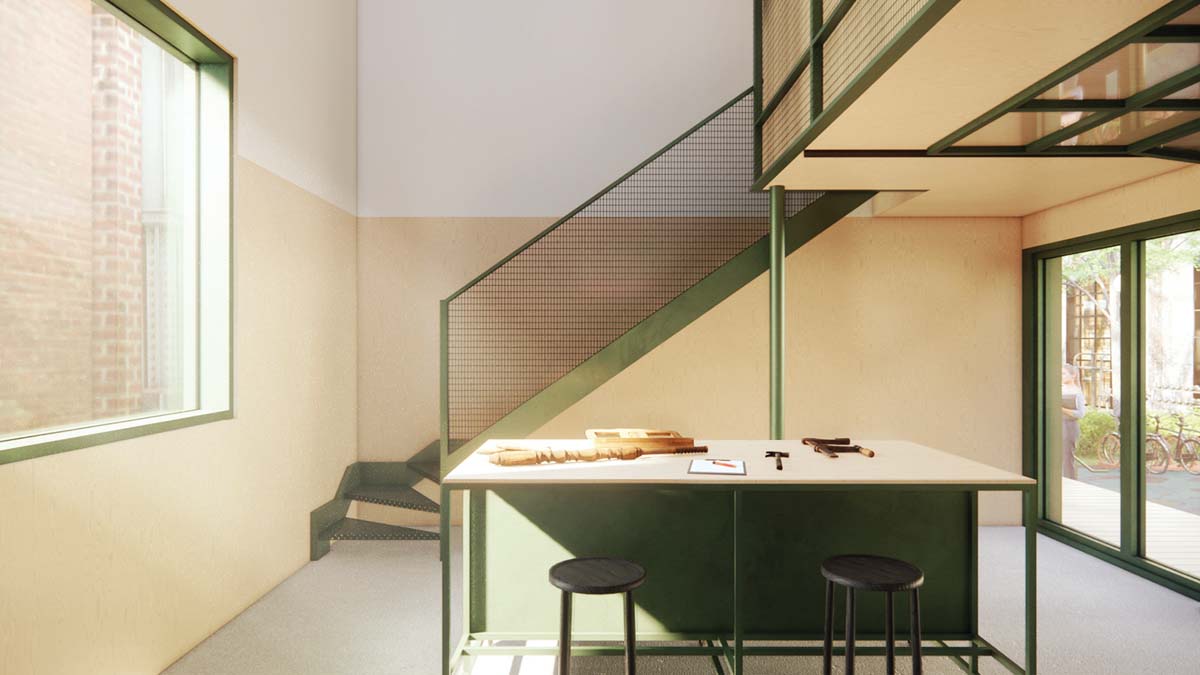 As the interior programming establishes itself, the project will evolve into a new cultural destination. The commercial spaces, workshops, open-air events and exhibition areas will create a strong sense of place, informed by the distinct history of this Montreal neighbourhood. The texture, materiality and strong geometric lines of the addition yield a fresh but grounded take on Angus Shops’ rich industrial heritage.