International design leader Lemay, interdisciplinary artist Angela Silver and SNC-Lavalin are the proud laureates of the City of Montreal’s anonymous International Multidisciplinary Landscape Architecture Competition to design the city’s new Place des Montréalaises, a vast public space in the Champ-de-Mars sector to honour 21 Montreal women who have shaped the city.

Lemay’s proposal stood out with its inclined plane connecting the top and bottom of the city, a grand gesture in response to the surrounding monumental landscape and institutions: the historic Champ-de-Mars, the new Centre Hospitalier de l’Université de Montreal (CHUM), Montreal City Hall and the municipal courthouse, among others. This suspended architectural piece becomes a floating flowery meadow, with integrated stairs inscribed with the names of 21 historic Montreal women: an accessible, intimate and evocative space. The meadow itself is a huge bouquet of 21 varieties of plants that will flower in sequence, constantly evolving in memory of les Montréalaises.

“The inclined plane is important because it allows us to repair the fracture in the cityscape left by the Ville-Marie Expressway when it was built,” said Lyndsay Daudier, a member of the selection committee and the Conseil des Montréalaises, referring to the sunken east-west highway that separated Old Montreal from its downtown counterpart for decades. Recently reconfigured, the covered thoroughfare and its inclined plane will make it possible to safely walk directly between the Old Port and downtown through a succession of momentous public places.

“It brings the new city and the Administrative District back together.”

This long-awaited reunification aligns with the award-winning master plan for Old Montreal’s Administrative District to the south of the site, and the recent redevelopment of Place Vauquelin, both of which were City of Montreal initiatives realized by Lemay.

“This is a truly transdisciplinary project, where all disciplines involved sat down together from the very beginning,” he said, referring to the close collaboration among three types of expertise—landscape, architecture and art—to produce a seamless design experience, and then draw on SNC-Lavalin’s in-depth knowledge of the expressway and its new covering, with assistance from ELEMA Experts-Conseils.

Landscape architect Patricia Lussier, a Lemay associate and design director, said the multifaceted team “designed the public space to be a multifunctional canvas for all Montrealers to make their own.” “The stairs offer users the opportunity to actually sit with the women being memorialized,” she said, referring to the integrated staircase’s inviting seating and the names of the individual women engraved on it.

What’s more, said project partner Ms. Silver, in charge of the commemoration component, “The tribute to the 21 women permeates the entire site, from their names inscribed physically on the steps to the architectural objects of memory, from the commemorative ascension sequence to the 21 varieties of plants in the meadow.”

Users of Place des Montréalaises will discover four distinct public spaces: one in each corner of the site. There will be an urban amphitheatre along Saint-Antoine St., while a multifunctional esplanade is built along Hôtel-de-Ville Ave. On Viger St., a forest with foliage evoking Mount Royal’s emblematic trees will serve as a pedestrian entrance to the Champ-de-mars metro station and its famous stained glass window, a work by Marcelle Ferron. Finally, a major urban axis will connect Gosford and Sanguinet Sts. in front of the CHUM Research Centre. 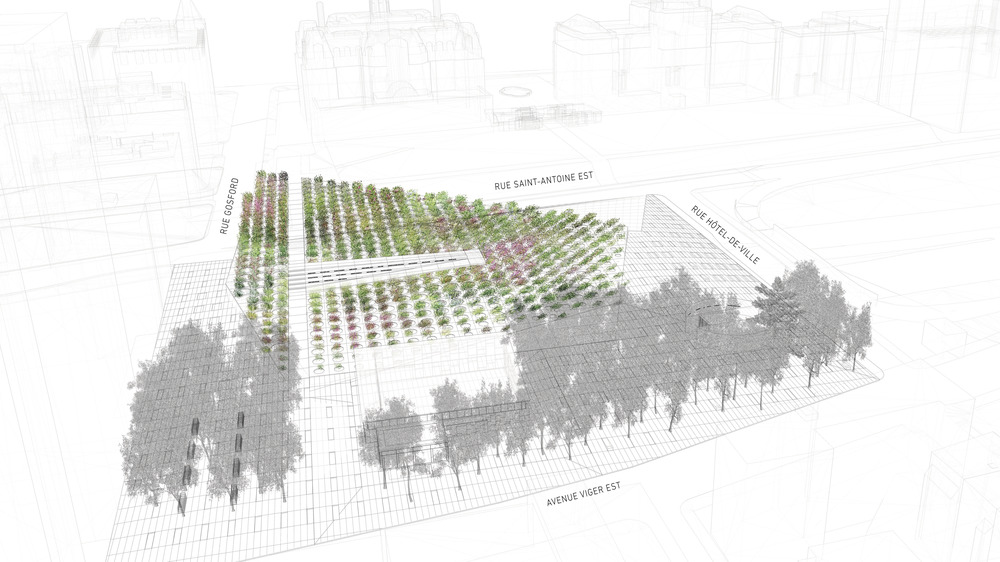 The design for the Place des Montréalaises will be conscientiously woven into the City of Montreal’s urban and monumental fabric, its every thoughtful detail embodying the importance of women to the city’s history.