A spaceship-like library is a welcome arrival in a multicultural Ontario suburb.

Nestled in a suburban Brampton neighbourhood not far from the edge of Ontario’s Greenbelt is a horizontal plane of strikingly striped and curving glass. It’s an incongruous sight, surrounded by miles of single-family housing and next to a set of big box stores and parking lots. As a recent article in the Bramptonist puts it, “an alien spaceship has landed in the city.”

It’s a welcome arrival, though. This is Brampton Library’s new Springdale Branch, a single-storey, 1,858-square-metre library with an additional 464-square-metre city-operated community space. The $16.7-million-project filled a need in a city underserved by libraries, and was designed with the adjacent Komagata Maru Park. Though full of people reading, working and socializing at all times of day, “it doesn’t look like a library” is a common refrain from users and even library staff. Words like “futuristic” appear often in comments, writing and conversation. To Brampton, this is not what a library normally looks like.

RDH Architects is well-versed in institutional projects. The firm is one of the oldest in Canada, tracing its roots back to 1919. It was a  powerhouse in the early- to mid-twentieth century, designing many prominent Canadian landmarks. In recent years, the firm has invested in young talent and won several Governor General’s Awards—including two in the past decade for libraries, led by architect Tyler Sharp.

How did Springdale Library acquire such an unusual shape? The triangular plan was a response to tight site conditions and the client’s desire to push the building close to busy Bramalea Road. RDHA carried considerations for site through the project—a section shows an invented topography on floor and ceiling, echoing berms and slopes in the adjacent park. The client was understandably surprised at the first design presentation—RDHA’s portfolio of libraries is full of straight lines and right angles. But they soon came on board with the playful scheme. The result is a space flooded with light and made vibrant by people, which has attracted attention and admiration from across the city.

Inside, spaces connect fluidly to each other, but each program has a distinct feel based on sectional, material and acoustic differences. The detailing is exquisite: a deep roof concealing insulation and mechanical systems reads as a delicate thin line on top of glass walls. The grandest gesture is the ceiling and skylight over the active reading atrium—a curving void, sculpted from drywall and adding height to an already tall space. This effect is expressed on the outside as a mounded green roof. Another drywall sculpture curves down over the children’s collection, gently compressing that space.

Merging research and practice, RDHA collaborated on a solar-responsive ceramic frit pattern with Brady Peters, an assistant professor at the John H. Daniels Faculty of Architecture, Landscape, and Design at the University of Toronto. The frit protects from glare as well as solar heat gain in areas with floor-to-ceiling glass. The arrangement of vertical lines is inspired by the sensation of depth in a forest, or the turning pages of a book. Parametric modelling was used to adjust the spacing and density of the pattern, with denser areas to the south and west, and sparser areas to the east and north. The collaborative process demonstrates an intentional embrace of patterns that are not only functional, but integrated into the design. 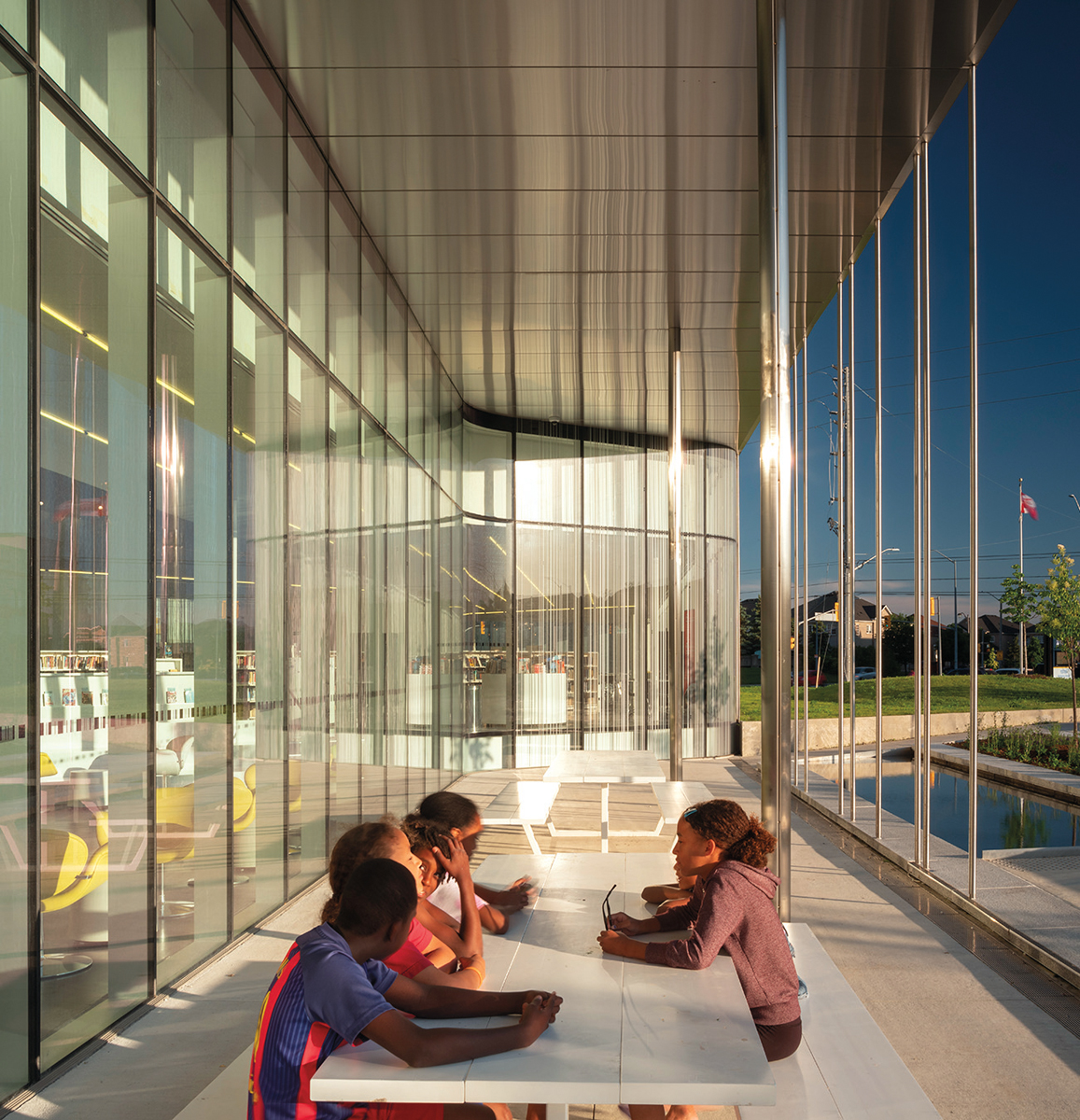 Sightlines allow for transparency between spaces, and between interior and exterior. This fosters connectedness and a feeling of community, and allows natural light to penetrate deep into the space—something the library staff appreciate, as daylight reaches even the few interior rooms. But transparency can also contribute to a feeling of being watched. In this sense, the library might not have been as successful in an urban setting, where patrons may have felt exposed to gazes from adjacent sidewalks. But here in Brampton, seats by the windows of the quiet reading atrium are truly peaceable, with views of the greenery at the edge of the ravine, and of passing traffic. It works because of the suburban nature of the site, with most people arriving by car.

Lexi Sensicle, the Springdale Library Branch Manager, told me that the library has been successful in creating connections between communities. One example, says Sensicle, is when students from a local high school visited the library to learn about sustainability in architecture, and saw the maker-space as part of the tour. Later, the school fostered a connection with the Toronto and Region Conservation Authority (TRCA), who needed access to a 3D printer as part of a conservation effort. The TRCA ended up printing 3D snapping turtles and painted turtles at the library, for placement in safe nesting spaces around Brampton’s Heart Lake Conservation Park.

The Springdale Library is targeting LEED Gold certification. A significant part of its application is for the incorporation of geothermal energy. Other sustainable features include daylight sensors, low-wattage light fixtures, charging stations for electric cars, low-E double-glazed glass, a partial green roof (the rest is painted white), and use of greywater in the landscape.

The park, designed by NAK Design Strategies in close collaboration with the architects, is a conceptual and functional extension of the community spaces in the building, with a playground, reflecting pool and picnic pavilion. The playground threads the word “IMAGINE” throughout its features, some letters visible only with careful observation. The reflecting pool, next to the children’s collection, is one of the delights of the project. Water reflects light through the ceramic frit onto the curved ceilings inside, creating shifting patterns.

The park’s name references a 1914 incident in which the Komagata Maru, a steamship carrying 376 immigrants from the Punjabi region of India, was turned away at the Port of Vancouver due to Canada’s discriminatory immigration laws. Upon its return to India, the British Army imprisoned and killed many of the passengers. In commemorating the incident, the City of Brampton hopes that the “theme of the new library and park will revolve around the broader story of multiculturalism and immigration to Canada.”

According to some estimates, two-thirds of Canadians live in some form of suburb, and population growth across Canada is much faster in these areas than in the urban cores. Brampton exemplifies the trend: it is the second fastest growing of Canada’s largest cities, and many of its new residents are immigrants.

Although suburbs are often conservative in their housing and commercial stock, this conservatism belies vibrant and diverse communities—communities that may have nuanced needs for community spaces and the public realm. Springdale Library is a beloved addition to the neighbourhood, a space that people are clearly proud of. Perhaps it will show other municipalities that radical visions of public architecture can be successful everyday community spaces—and inspire them to approach civic architecture with more ambition.

Researcher, writer and editor Jocelyn Lambert Squires is the Director of Marketing and Communications at Brook McIlroy.