World Architecture Festival, the world’s largest international architectural event, opened earlier today in Amsterdam. Following a busy day of live presentations, in which hundreds of shortlisted projects were presented by architectural practices from around the world, the first award winners of the 2018 festival have been announced. The first day’s Awards category winners include a shrine in the Philippines, a bereavement centre in Liverpool, England, and a power station in Finland. Practices claiming an award today include Allford Hall Monaghan Morris, 3XN Architects, and BIG – Bjarke Ingels Group, as well as a project by Montreal’s own KANVA Architecture Inc.

KANVA won the ‘Experimental – Future Projects’ award for their Imago project for Montreal, Canada. The judges commented that the series of inflatable, mobile biomorphic structures offers the chance for behavioural change and embodies innovation at its core. It can also be as a paradigm elsewhere.” 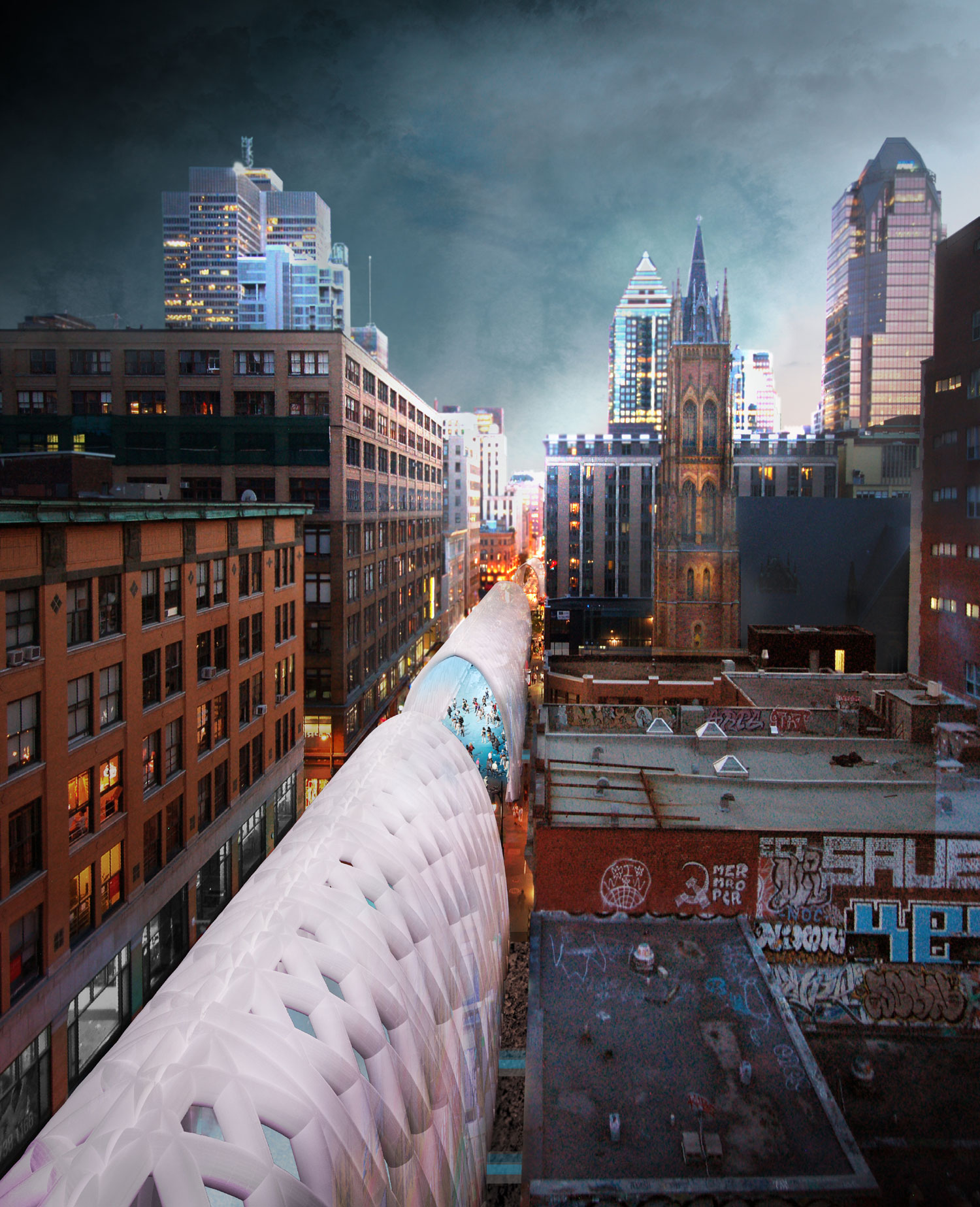 The ‘Civic and Community – Completed Buildings’ category was won by CHROFI with McGregor Croxall for their Maitland Riverlink project in Maitland, Australia. The project included the creation of a new public space between the town’s high street and river, flanked by public amenities, with judges impressed by the clarity and simplicity of the architects designs in opening up the town to the river by removing existing buildings.

The winners of the ‘Culture – Completed Buildings’ award were Conrad Gargett for The Piano Mill project in Stanthorpe, Australia. The building’s shape and construction excited the judges, who felt it was perfect for its location, viewing it “prime instrument in an orchestra of trees.”

The winners of the ‘Display – Completed Buildings’ category were Arkitema Architects & Professor Christoffer Harlang for their Hammershus Visitor Centre in Allinge, Denmark. Celebrating the largest castle ruin in Northern Europe, located on the tiny Baltic island of Bornholm, the centre’s designs were hailed by judges as a real “Gesamtkunstwerk – a total complete project.”

David Leech Architects were winners of the ‘House – Completed Buildings’ category for their A House In a Garden – 81 Hollybrook Grove project in Dublin, Ireland. The practice’s first project was commended as an “extremely precisely thought, conceptualised, and executed exercise in layers of detail.”

Heatherwick Studio won the ‘New and Old – Completed Buildings’ award for their Zeitz MOCAA project in Cape Town, South Africa. The inventive, creative and intriguing reuse of industrial grain silos wowed the judges, with the building’s new entrance lobby lauded as a “unique and evocative space.”

INNOCAD Architecture triumphed in the ‘Office – Completed Buildings’ category with their C&P Corporate Headquarters project in Graz, Austria. Judges were impressed by the intricate and adaptive design of the real estate developer’s new landmark headquarters, and also praised the building’s open floorplates and smart common areas.

Parvianen Architects won the ‘Production, Energy & Recycling – Completed Buildings’ award for their Lansisalmi Power Station project in Finland. Judges commented that “the consideration exhibited in the composition extended through the architect’s choice of materials and details, which is rare in this building typology.”

The ‘Civic – Future Projects’ category winner was The Sunken Shrine of Our Lady of Lourdes of Cabetician, Bacolor, Philippines by BAAD Studio. The designs were commended by judges for conserving the existing structure of the ruined shrine, which was buried in ash following the eruption of Mount Pinatubo in 1991, deeming it a “serious solution, rooted in an ecological response, to the problems of flooding and landslides caused by the eruption.”

Nextoffice won the ‘Competition Entries – Future Projects’ category for their Sadra Civic Center project in Iran. The festival’s judges found this scheme to be a rich, sensitive solution to a pressing urban challenge, which draws on historical sources in building and planning to create a viable urban nucleus for a new town.

The ‘Health – Future Projects’ category winner was The Alder Centre, Liverpool, United Kingdom by Allford Hall Monaghan Morris. The bereavement centre is unique within the UK National Health Service and internationally; providing bereavement counselling for families who have had a child pass away as well as a national telephone helpline and general counselling for hospital staff. Judges commented that “technical and emotional aspects of the design are integrated into delicately balanced architecture.”

The ‘Infrastructure – Future Projects’ category winners were Monk Mackenzie + Novare, for their Thiruvalluvar project in Kanyakumari, India. The designs for a 500 metre long pedestrian bridge located at the southern-most tip of India was commended by judges as “a simple and elegant response to a complex problem.”

BIG – Bjarke Ingels Group was victorious in the ‘Leisure Led Developments – Future Projects’ category, winning the award for their Audemars Piguet Hotel des Horlogers in Le Brassus, Switzerland. The Danish practice was commended for how the designs “seamlessly resolved the connection between the existing factory and its sloping site.”

The ‘Office – Future Projects’ award, supported by Forbo, was won by 3XN Architects for their Olympic House project in Lausanne, Switzerland. Designed as the future headquarters of the International Olympic Committee, judges commended the architects for their “strong and subtle response” to the client’s brief, and felt it was a “very sophisticated design that was very well resolved

Billie Faircloth is a partner and research director at KieranTimberlake, where she leads a transdisciplinary research team and fosters collaboration in order to define a relevant problem-solving boundary for the built

Billie Faircloth is a partner and research director at KieranTimberlake, where she leads a transdisciplinary research team and fosters collaboration in order to define a relevant problem-solving boundary for the built environment. She lectures internationally to academic and industry audiences. Her book Plastics Now, On Architecture’s Relationship to a Continuously Emerging Material, was published by Routledge in June 2015.