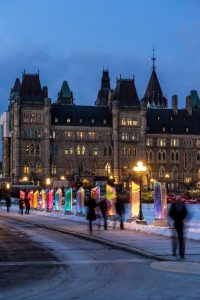 Giant rotating kaleidoscopes are casting a rainbow glow for the holidays in two North American capital cities this month. Prismatica, a public art installation by RAW, has landed on the banks of the Potomac River in Georgetown, Washington D.C. as part of Georgetown GLOW. The same light-bending exhibit has simultaneously been installed on Parliament Hill in Ottawa as part of the Christmas Lights Across Canada Season.

“It’s exciting for a Canadian light installation to be running in two North American capitals. Quartier des Spectacles does a great job of sharing the work that they commission around the world and we’re honoured that Prismatica was given a chance to participate in both of these festivals,” says Roland Rom Colthoff, founder and director of RAW.

Prismatica is a participatory installation comprising 25 pivoting prisms more than two metres tall. Each one is made of panels covered with a dichroic film that reflects the colours of the rainbow, varying with the light source and viewing angle. Each prism is mounted on a base containing a projector that gives the installation a new dimension after nightfall. The rotation of the prisms triggers variable-intensity bell music. After sunset, the enormous interactive kaleidoscope’s illusory effects reach a crescendo.

“Prismatica was created to be fun, immersive and playful. We want people to forget about the cold and to get out and enjoy their respective cities in a new light,” adds Pierre-Alexandre Le Lay, one of Prismatica’s designers and architect at RAW. 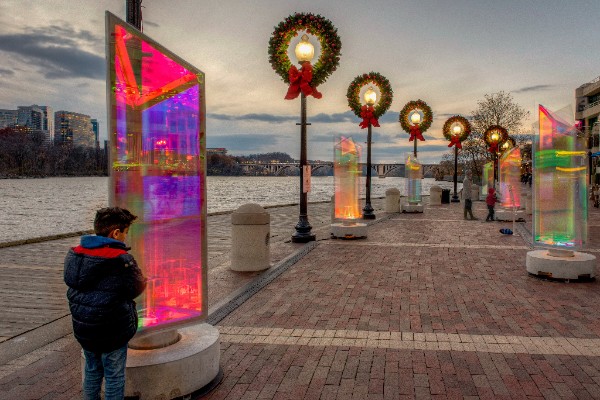 Both exhibitions of Prismatica are on display for free daily. Georgetown GLOW runs from December 2 until January 1 at Georgetown Waterfront Park. Christmas Lights Across Canada Season runs from December 7 until January 7. Prismatica was initially produced for Montreal’s Luminotherapie festival in 2014 after RAW won an annual competition held by the Quartier des Spectacles.