Jurors parse the winners of our annual awards for future projects. 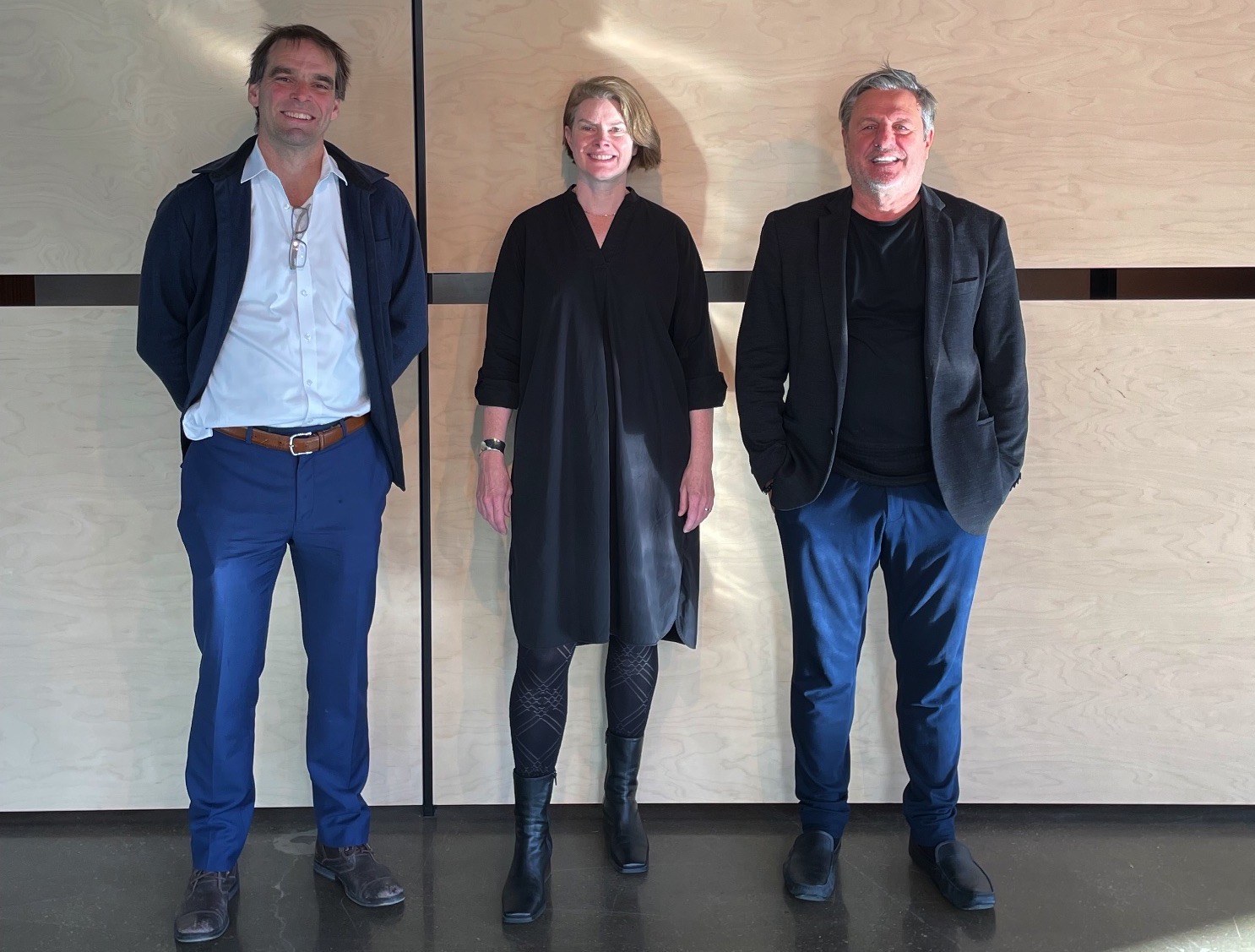 What is architecture’s role amidst pressing issues such as surging inflation, the growing magnitude of the climate crisis, and an increasing awareness of the need for greater social equity? Many of these issues come together in the calls for reconciliation with Turtle Island’s Indigenous Peoples, a notion reflected in the large number of submissions received that addressed Indigenous clients, or bore Indigenous names. From among these, the jury selected two projects to be recognized with awards. The Mukwa Waakaa’igan Indigenous Centre of Cultural Excellence at Algoma University, by Moriyama & Teshima Architects with Smoke Architecture, adjoins a former residential schoolbuilding. It offers a compelling architectural response to the question of how to handle buildings with a fraught history; there is an ongoing searchfor unmarked burials on the site. The new intervention does not seek to destroy or overcome the existing colonial structure, but insteadaims to to create a place of knowledge-sharing and healing, through a curved, mass timber building that gently rises to look over the former residential school towards new futures.

Another awarded building, the Muscowpetung Powwow Arbour, is a place of celebration—a centre for the summer powwow celebrations that take place for the Muscowpetung First Nation, located in southern Saskatchewan. Designed by Oxbow Architecture and Richard Kroeker. The structure draws inspiration from the form of Prairie teepees, and points to the importance of the circle in Indigenous cultures. Moreover, it looks to the Indigenous ingenuity used to craft structures from the resources at hand: the pavilion is built from local trees milled on-site, and uses light, tension connections that minimize the materials used. The result is a delightful building, and a case study in how non-Indigenous architects and designers can engage with Indigenous communities in thoughtful ways to create a meaningful result.

Although the project did not win an award, the jurors were impressed by the robust community consultation with many Indigenous organizations that was part of the process for designing the DawesRoad Library in Toronto, by Smoke Architecture with Perkins & Will. The resulting design—a boldly patterned, softly curved façade evoking a blanket wrapping the building—is one they felt could only legitimately emerge from the direct involvement of an Indigenous designer and from extensive consultation. To bring this to the next level, they would have liked to see the same process more deeply inform the interior planning and design of the space.
A consultative community process—a tendency that the jurors feel will accelerate over the coming years—was also at the heart of another project thatwas noted by the jury, but did not win an award. In Hope Blooms: Community, Design, Build,Halifax-based firmFBMengaged in a co-creation process leading to thedesign of a series of flexible modular booths that could be deployed to support a park’s pop-up market, urban garden, and performance area. While the end result did not have the same degree of complexity as the selected projects, the jury admired the community engagement that underpinned the work.

Environmental sustainability was another theme of note in this year’s submissions. Over a third of the entries were accompanied by an energy report, and the metrics for many buildings were encouraging—generally tracking well under 100 kwh/m2/year for Total Energy Use Intensity (TEUI), and in some cases targeting a Thermal Energy Demand Intensity (TEDI) of less than 20 kwh/m2/year. One project recognized by the jury, Passive(doppler)haus in Search of the Sublime, by EDGZ Architecture & Design Studio, is a Toronto infill dwelling with aTEDIof a mere 14.6 kmh/m2/year and aTEUIof 60 kwh/m2/year—a demand fulfilled in part by photovoltaic panels, set on a rooftop angled to optimize their placement. The jury was impressed by how these energy achievements were taken in stride, contributing, rather than detracting from, a layout that creates careful sight lines and displays a judicious consideration of materials within a compact layout of duplex units.

Significant savings in embodied carbon are realized through the adaptive reuse of existing buildings. This is one of several themes in the design of PHI Contemporary, by the consortium of Pelletier de Fontenay, Kuehn Malvezzi, and Jodoin Lamarre Pratte, which the jury selected for an award. Located on a site in Old Montreal, the design deftly weaves together several existing structures with a series of galleries, courtyards, and terraces, inviting a variety of contemporary artistic interventions. The jury also appreciated the Court House Theatre in Saint John, New Brunswick, by EXP Architects, as an elegant adaptive reuse and addition on a tight urban site, which appropriately converts a former courtroom into a stage. Another round of design refinement, they felt, may have edged the project into award territory.

Several of the awarded projects were notable for their attunement to their context. The Montreal Holocaust Museum, by KPMB Architects and Daoust Lestage Lizotte Stecker Architecture, reflects the rhythm of its St. Laurent Boulevard site, evoking the lots of storefronts in the neighbourhood once at the heart of the city’s Jewish community. Another pair of projects in Montreal pay homage to different aspects of the city. Coeur Nomade Library and Cultural Centre, by Affleck de la Riva and Coarchitecture, is a study in culturally attuned architecture that creates a warm, welcoming space for new immigrants and residents alike in a lower-income sector of Montreal. Les Ateliers Angus, by NÓS, nestles a dozen studios for craftspeople in the shell of an old railway manufacturing facility.

How does this kind of contextual thinking translate to a larger scale? The jury saw positive direction in a project located near the Angus site. Canoë, by Aedifica and ADHOC architectes, is a masterplan for a new residential block that draws on the typology of Montreal’s laneways to create a vibrant, pedestrian-oriented central spine.

While not awarded, the jury also saw a confluence between issues of sustainability and affordable housing in the project for 1925 Victoria Park, in Toronto, by PARTISANS. The project imagines a path forward for rental housing in the city through the use of modular masstimber frames, which create a street-facing cellular structure for apartments and retail storefronts, and a courtyard activated with exterior balconies and terrace planting.

The elusive combination of craft and contextual senstivity was seen in two final projects awarded by the jury. Drawing on the log-clad vernacular of local buildings from the 1960s, the Hornby Island Arts Centre, by D’Arcy Jones Architects, creates a flexible space for artistic presentations and gatherings in a community off the coast of Vancouver Island. And in Edmonton, gh3* and S2 Architecture’s Blatchford District Energy Sharing System Sewage Heat Exchange tackles a valuable approach to heat recovery with technical prowess, refined architectural form, and a touch of humour.

This year’s student awards went to a trio of projects that took diverse approaches, showcasing the range of research and design thinking currently emerging from architectural education. Johnathan Lum’s Chaos & Control looks at the how to design structures that help restore land and habitat in a compromised ecosytem, using felled cottonwood trees that are generally overlooked as a construction material. Jon Ackerley’s Subindustria is also interested in the delicate balance between humans and the natural environment, but takes a contrasting approach, with a graphics-centric proposal for a somewhat dystopian future, where suburban houses become components in an industrial machine for producing more of their like, from bio-based materials grown and processed on site. Naomi Julien’s From Loom to Room experiments withusing string to weave a one-person room, exploring the possibilities of working with a single, ephemeral material to delineate space.

Five years ago, Canadian Architect introduced the Photo Awards of Excellence to recognize the artistic presentation of completed works of architecture. This year, photographer James Brittain won recognition for images of an old building—a Dory Shop in Nova Scotia, one in a series of vernacular buildings he documented for architect Brian MacKay-Lyons—and a new building—the Montreal Insectarium, by Kuehn Malvezzi, Pelletier De Fontenay, and Jodoin Lamarre Pratte architects. Jacqueline Young was similarly recognized for two photographs: an atmospheric image of an apartment tower wrapped Christo-like in white building paper, under a blanket of snow, and a golden hour image of a builder at work on a small riverside hut. Finally, Lisa Stinner-Kun’s image captures a group of elk, framed in the breezeway of a lakeside house by 1×1 Architecture.