A public art and landscape installation inspired by Terry Fox’s legacy has been selected as a new keystone of Toronto’s waterfront. Led by Legacy Art Project Toronto (LAPT), the new work will be unveiled in Fall 2020 to help mark the 40th anniversary of Fox’s cross-Canada Marathon of Hope.

Designed by Jon Sasaki and DTAH, We Are Shaped by the Obstacles We Face draws waterfront visitors along a curving, landscaped path that is obscured by one-storey-high sculpted granite slabs.

From the installation’s west end, they present as a single figure – the iconic silhouette of Fox, midstride. “The granite sculptures act as an optical illusion inviting pedestrians to consider obstacles as opportunities,” Sasaki says. “The design strives to convey Terry Fox’s legacy in an experiential way, to inspire people to keep pushing forward and to recognize all that can be achieved with a collective perspective.” 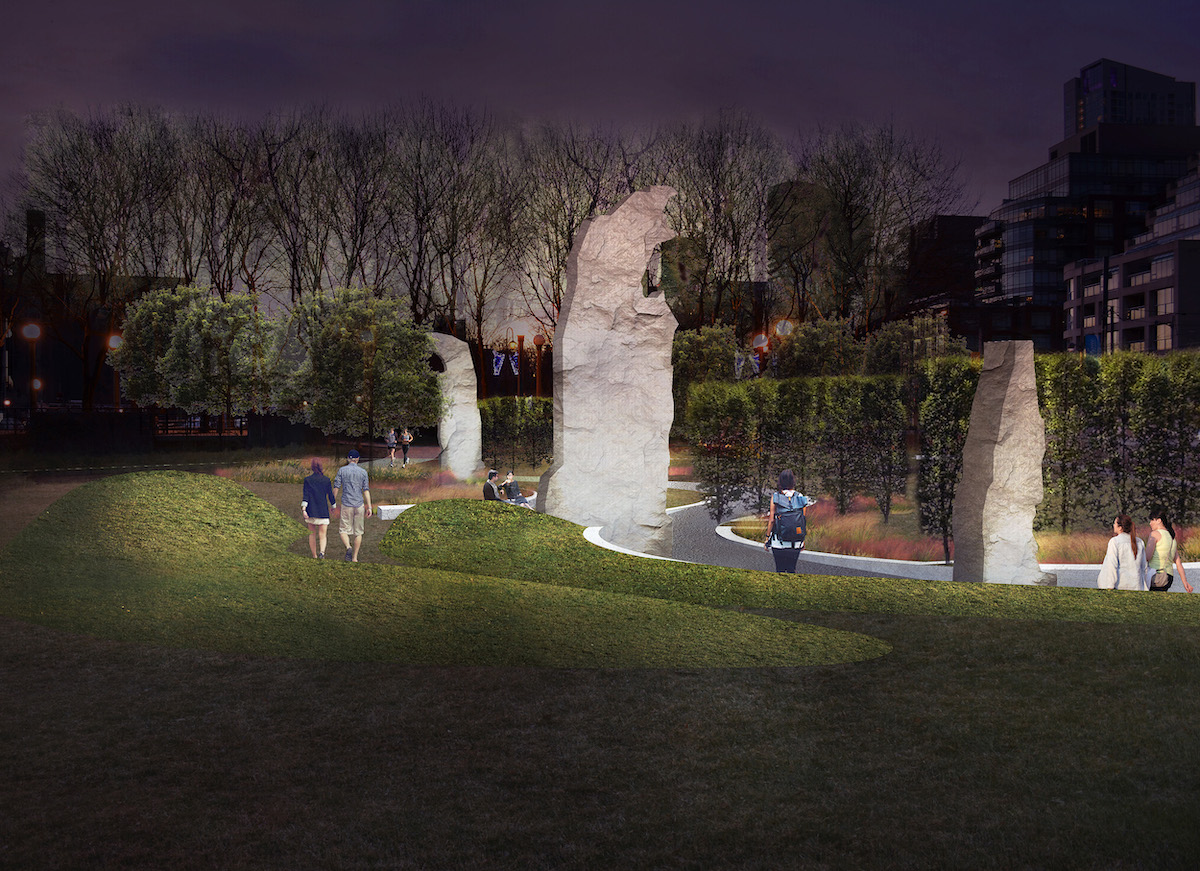 Toronto City Councillor Joe Cressy, representing the ward in which the art park will be located, congratulates Sasaki and DTAH, a multidisciplinary design firm with James Roche as the lead landscape architect, “… on the creation of an evocative public space that Torontonians and city visitors will enjoy for generations to come, one that is a gift to the city and to all Torontonians.”

An open, national design competition, facilitated by seasoned art consultant Rebecca Carbin, Principal of Art + Public Unltd, was conducted in the fall of 2018. The jury, comprised of art and design luminaries, selected the finalist after receiving proposals from five Canadian artist and landscape architecture teams. They chose the winning piece following a reception at Fort York that also welcomed Fox’s biographer, Leslie Scrivener and Councillor Cressy.

Isadore Sharp, founder and chairman of Four Seasons Hotels and Resorts and founder of the Terry Fox Run, pledged his personal support for this tribute to Terry which “would become a Toronto landmark, both a place for reflection and a catalyst for future fundraising, so that Terry’s goal of finding a cure for cancer can be achieved.” He added, “His fight became our fight and a lasting tribute to Terry is a reminder to us all to never back down in the face of adversity.”

To support the installation’s construction, the Legacy Art Project invites the support of Canadians in following the project and in donations.

Design Exchange to deaccession collection and pivot to programming

On the Docks: Reimagining Winnipeg’s Waterfront