WINNER OF A 2018 CANADIAN ARCHITECT AWARD OF MERIT

In 1904, much of downtown Winnipeg was threatened when a fire at James Ashdown’s Main Street hardware store raged out of control. The domestic water supply, fed by artesian wells, proved inadequate, and untreated Red River water was pumped into the domestic supply in a desperate attempt to increase water pressure. The fire was extinguished, but the city’s water supply was contaminated in the process.

In response, the James Avenue Pumping Station opened three years later. It housed the massive equipment required to run a high-pressure water system for fire-fighting, and was serviced by the city’s rail system. But almost a century after, it was no longer needed for its original purpose, and the building has been vacant since 1986. It was purchased by our client in 2015, who is now turning it into a mixed-use development. 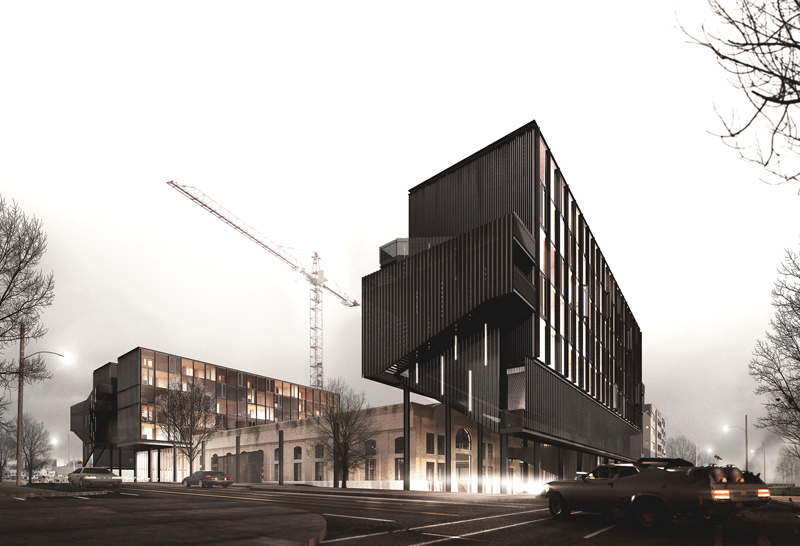 After 17 attempts to revive the historic structure over the last 14 years, it was slated for demolition. But then 5468796 developed the building pro forma for the James Avenue Pumping Station and presented it to the current client, leading to successful preservation through private investment. The pumphouse is retained, and three mixed-use buildings will be built on the east and west ends of the parcel. Linked by street-level alleyways and overhead walkways, the structures maintain views of each other and create a tight urban-scale environment that corresponds to the thriving mixed-use neighbourhood.

Capped at six storeys in height, the new development consists of rental apartments, commercial use at ground level, and structured parking. Exterior walkways and skip-stop corridors increase the efficiency of the building, allowing for cross-ventilation in all units and permitting a maximum number of suites to overlook the river. Intelligent zoning and connections between the historical building and the new program will strengthen tenants’ and visitors’ relationship to each other and to their local architectural history. 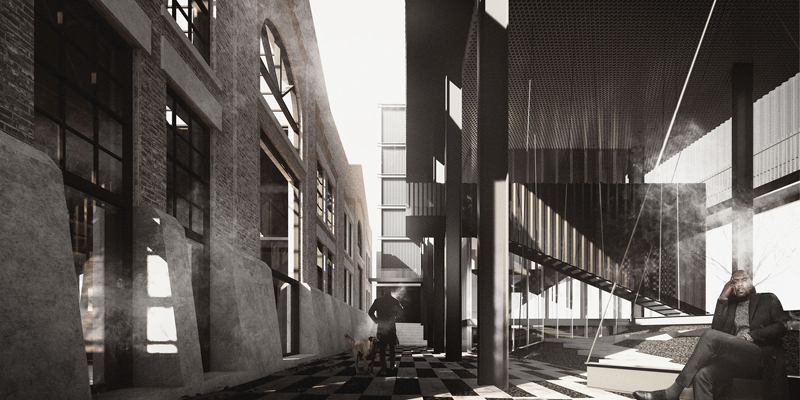 While the existing pumphouse’s foundation was not capable of supporting the construction of additional floors on top, a gantry crane capacity allowed for a new floor within the existing building. Incorporated as tenancy, this left the pumps on the main floor free and clear of complicated programming. The development scenario allows for the great pump hall—a well-preserved example of the ‘golden age’ of machinery—to be physically showcased, free on all sides and newly accessible to the public. 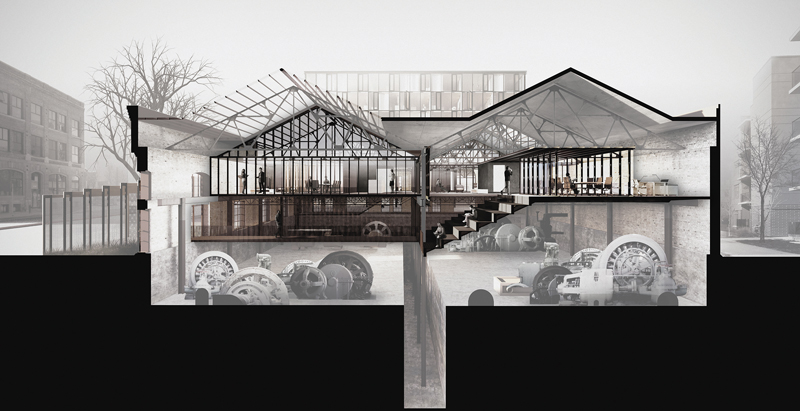 In keeping with the utilitarian nature of the original design, the new-build volumes bookend the existing structure and subtly support its aesthetic through deliberately simple, modular forms. Views are directed to the historic pumphouse from a variety of vantage points—the approach to the site, the neighbouring exterior walkways, and the intimate alleyways formed between the old and new facades—highlighting the building’s storied past.

Ted Watson :: This project is compelling in the rationality with which it delivers density and residential accommodation, while engaging deliberately but lightly with a heritage property. The notion that this was a pro forma brought to the developer by the architects is very promising. Can our profession be more proactive about development, and how we can be driving those solutions?

Monica Adair :: The architect creates a procession of circulation in the interior of the central building that captivatingly connects to the lower bowels of the old pumping station. Over the course of its deliberations, the jury questioned whether the exterior public realm and retail zones could be further developed in a way that would reveal their engagement with the urban fabric. How could these exterior spaces be animated to feel like an inviting environment that penetrates the raw urban realm that exists on and around the site?

David Penner :: Hats off to the development team, because it has taken some 25 years for something to happen on this site, with its remarkable heritage building. The addition has an appropriately industrial character that links to the pumphouse machinery that is retained on the lower level. It’s bold and tries new ways of engaging the historic. It is only unfortunate that the addition obscures the twin-gable facade of the pump house, which is its key elevation.