RFQ submissions are open for the $28M project on a site on Montreal's Saint-Laurent Boulevard. 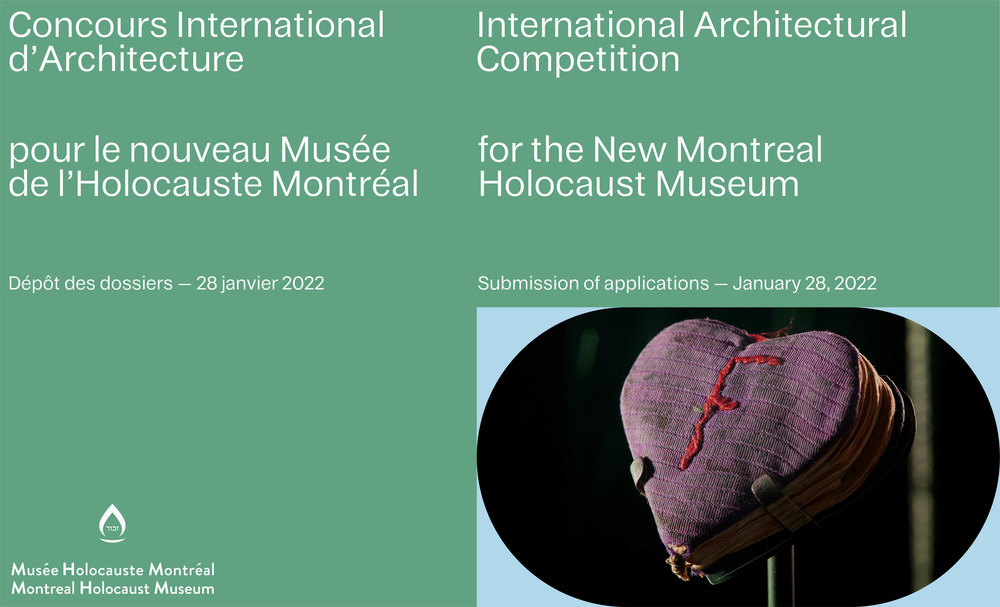 The Montreal Holocaust Museum (MHM) has announced the launch of an international architectural competition for the design of its new building on Saint-Laurent Boulevard in Montreal. The Museum invites architects to submit their candidatures until January 28, 2022.
The competition calls on architects to creatively address the importance of Holocaust remembrance sites, and the education of future generations about the dangers of hatred, antisemitism, and racism.

Founded in 1979 by Holocaust survivors and young leaders of the Jewish community, the Montreal Holocaust Museum holds an exceptional collection of artifacts and recorded survivor testimonies, and is also know for the excellence of its educational programs, exhibitions, and innovative outreach. The mission of the Montreal Holocaust Museum is to educate people of all ages and backgrounds about the Holocaust, as well as the universal perils of antisemitism, racism, hate, and indifference. Its work also emphasizes the importance of respect for diversity and the sanctity of human life.

The Museum aims for its new building to achieve the highest level of architectural excellence, to make a lasting impression on the landscape of Saint-Laurent Boulevard, to connect with new audiences, and to create a significant impact on present and future generations.

The new MHM will open its doors in 2025, allowing a new generation of visitors from around the world to discover the history of the Holocaust, the resilient stories of survivors who rebuilt their lives in Montreal, and the importance of respecting human rights. The Museum will be a space for cultivating historical awareness and encouraging citizen action that will contribute to a more just and socially responsible world. The public campaign for the new Museum will be launched in the winter of 2022 in order to raise funds and awareness for this important cause.

The architectural competition will take place in two principal stages and is intended to create a dialogue between the teams and the Museum.

Stage 1.1 aims to qualify teams that can successfully undertake the project through a qualification dossier presenting the composition of the team and relevant completed projects.

Stage 1.2 is designed to encourage ideas, interpretations, and approaches for the new Museum. Based on the concepts and spatial strategies submitted anonymously, four proposals will be selected by the jury as finalists.

Stage 2.1 will see the introduction of the structural and electromechanical engineers, as well as landscape architects who will join the finalists to form a multidisciplinary team for the next stage.

Stage 2.2 is paid, allowing the four finalist teams to further develop their concepts presented in stage 1.2. Guided by the jury’s comments, they will create architectural solutions and develop the project in an interdisciplinary manner.

The jury is composed of MHM representatives, as well as experts in Holocaust history, museums, architecture, and landscape architecture:

Eva Kuper, Educator and Holocaust survivor, Member of the Museum’s Board of Directors

For additional information on the competition, candidates are invited to visit the Montreal Holocaust Museum website, and to consult the official competition documents available on the SEAO website.