Stock and sand-lime. Soft-mud and stiff-mud. These are some types of brick produced between 1889 and 1989 at what’s now the Evergreen Brick Works near downtown Toronto. The place, at the bottom of the Don Valley, has a historic and visual richness to match the jargon masonry: Its obsolete industrial buildings have been adapted into a collage of new and old uses, new concrete and old brick.

The latest addition to that ensemble is a redevelopment of the Kiln Building, the largest structure on the site, as an event and educational centre. Led by LGA Architectural Partners, this is a subtle and complex project: providing an example of sustainable building through the adaptive reuse of a heritage building in a flood plain. And doing so while retaining as much of its brick and steel as possible. 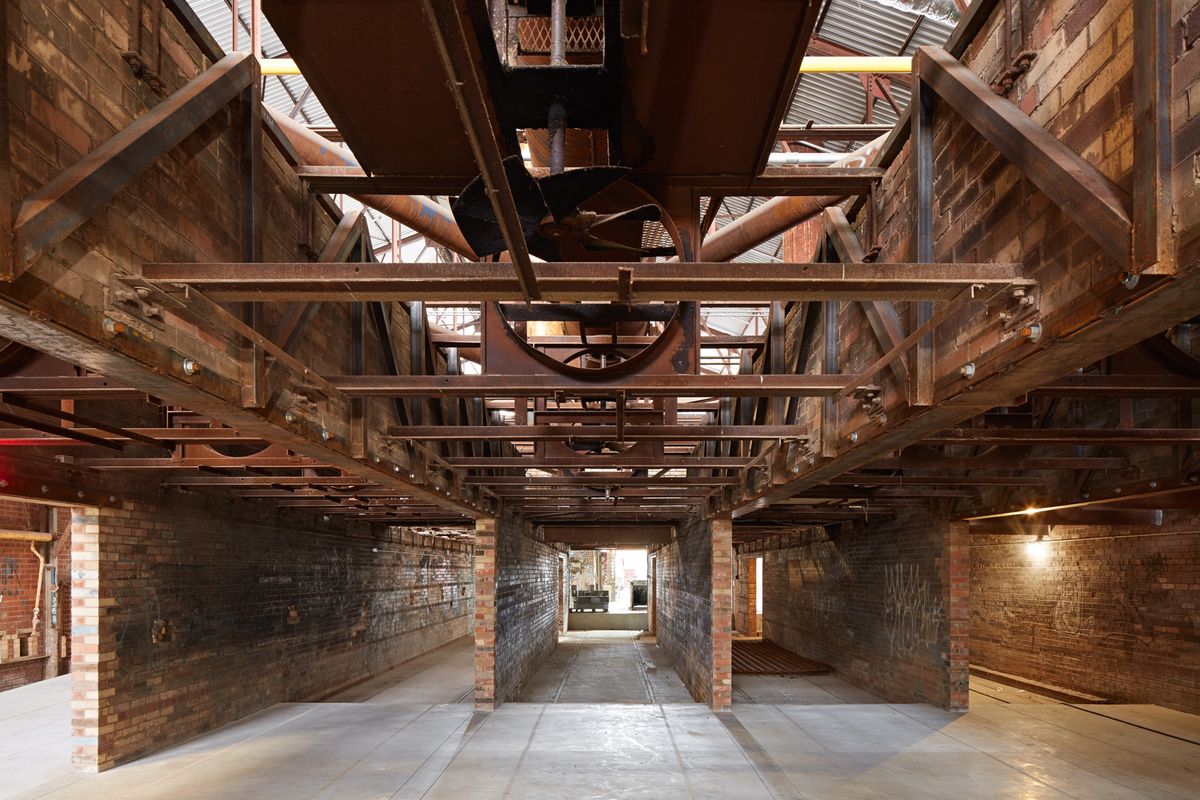 There’s a lot to retain. The building embodies the industrial sublime: Its massive, cathedral volume contains an assembly of low kilns, each with improbably long proportions and thousands upon thousands of bricks that testify to the craft of a century ago.

“There are so few places left that have this kind of texture,” explains LGA partner Janna Levitt. “The project was a series of edits and surgical operations. You couldn’t leave it just the way it was, but we wanted it to feel as close to that as possible.”

Also known as Building 16, the 133-by-37-metre structure sits in a corner of the Brickworks site, which also includes a former quarry and renaturalized open space. The whole place has been a city park since the 1990s, and since 2010 its dozen or so buildings have been operated by the non-profit Evergreen with a variety of programs, including an education centre, a restaurant and event venue. Evergreen “always saw a really big use for this building,” says the group’s CEO, Geoff Cape, “But we hadn’t had the big idea.”

It is, after all, a big place, even cavernous: close to 60,000 square feet, with a roof that peaks at four storeys. Until recently about a quarter of its floor space was open, and the rest filled with remnant kilns–long brick structures, variously vaulted or flat-roofed, which served as stations in the brick-making process. The current renovation makes the space usable for large-scale events of up to 2,000 people, principally by closing the envelope, adding washrooms and raising the building’s floor level.

The work was more complex than it sounds. The Evergreen Brick Works, after all, has a complex history. During Toronto’s rapid growth from the 1880s to the 1950s, many of the bricks that define the city’s architectural fabric were pulled from the earth, formed and baked right here. “There is hardly another place that has the same pervasive relationship with the built fabric of the city,” says Evergreen CEO Geoff Cape.

The Kiln Building was constructed in 1956-1957, containing a series of long, narrow kilns for drying and then firing brick. Railroad cars were used to move the brick, and also coal that was used to feed the kilns. 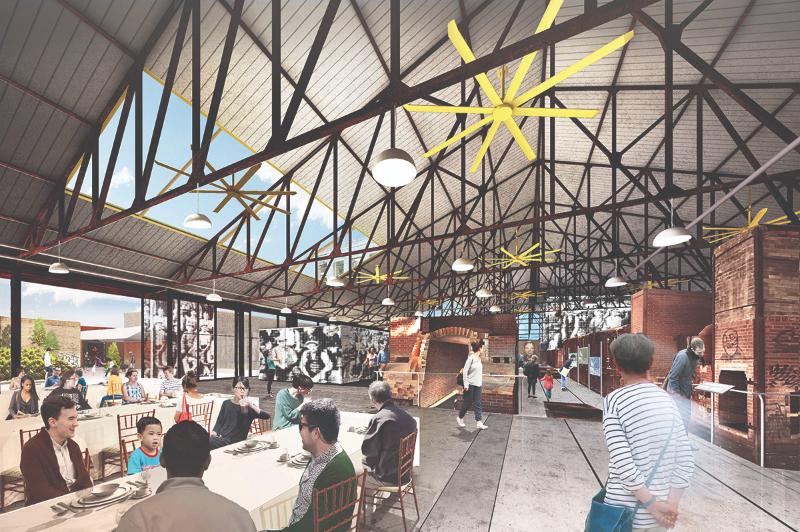 The rail tracks on which those carts ran created one of the major heritage conundrums in the current project. The client and architects agreed that the floor needed to be raised: It had been about three feet below grade, which made the building inaccessible and awkward. You had to step down from an adjacent courtyard “like you were stepping into a pit,” as Levitt aptly puts it. And yet heritage planners wanted the pattern of the floor preserved in some form, as a trace of the site’s material history. “It was a big negotiating issue—if you’re going to raise the floor and cover it, what do you do with the existing floor, which is part of the history of the place?”

LGA and their collaborators, including heritage architects ERA, designed a new poured-concrete floor that replicated some of what lay below. Embedded steel strips trace the paths of the rail tracks. The move echoes the replica rail ties that James Corner Field Operations and Diller Scofidio installed on the High Line in New York, albeit in a more subtle form. Elsewhere in the Kiln Building, the concrete floor surface is sandblasted to show the footprint of kilns long since removed. 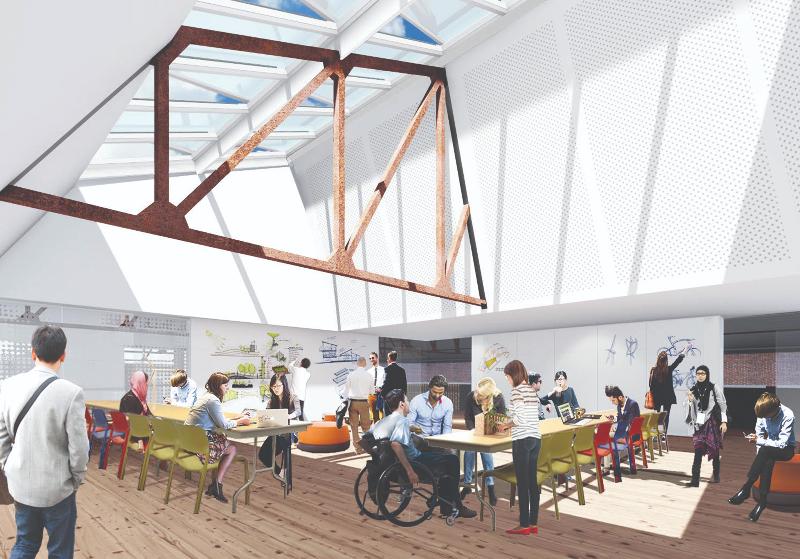 Raising the floor also made the building less vulnerable to flooding, a major issue. After all, the Brick Works sits in a valley, and while the Don River is a relatively narrow river it is very much prone to flooding. Significant floods are a frequent occurrence on the site. The new, higher floor level is above the level of a so-called 50-year flood, an event that actually happens much more often than that. Further flood mitigation comes from channels within the floor slab; the concrete was poured over domed plastic modules (the Canadian-made Cupolex system), which provide a drainage channel while also reducing the amount of concrete required for the slab.

LGA and their collaborators were given a strong sustainability mandate: The project, over the long term, is intended to be carbon-neutral. In order to achieve this, the architects specified a combination of geothermal heating and cooling, combined with a radiant system within the floor slab. They also relied on passive ventilation; new skylights near the top of the gable will ventilate the massive space. 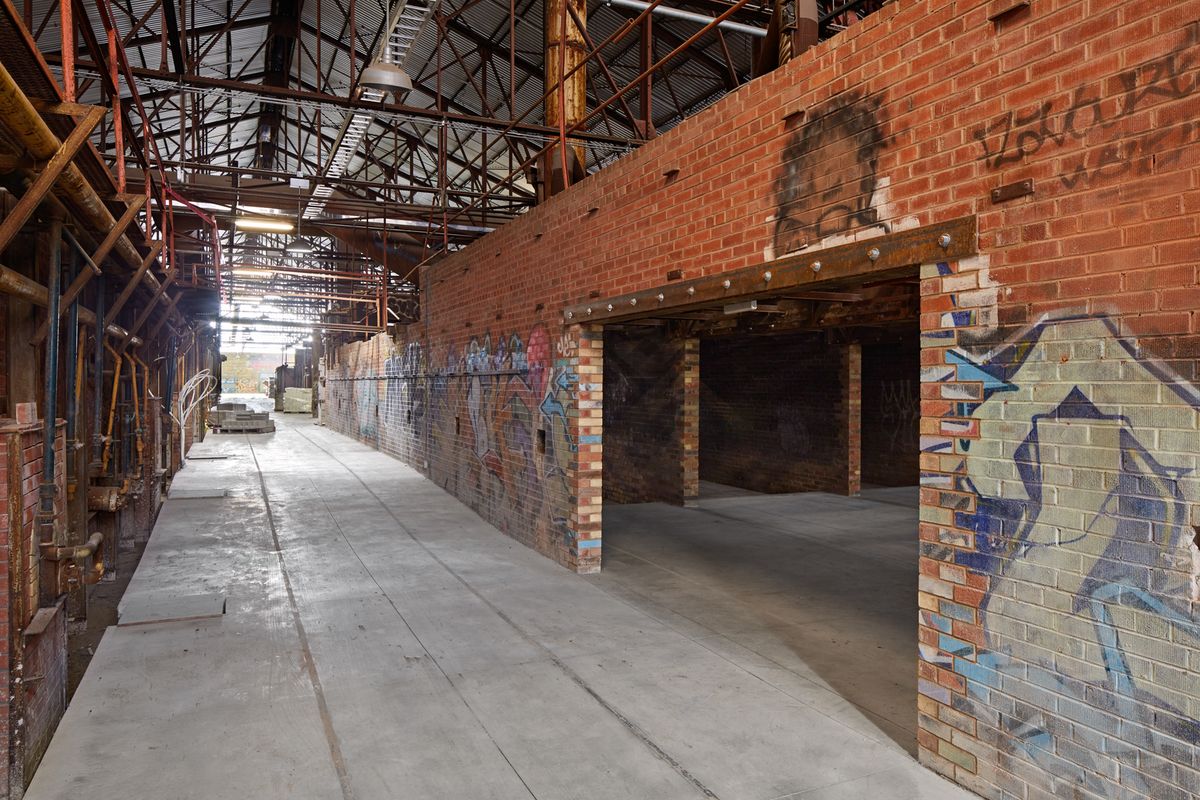 Otherwise, the structure remains remarkably thin. Its walls had been open in places at ground level; the architects filled these gaps with a high-performance triple-glazed curtain wall. The upper reaches of the structure, which are not airtight, were largely left alone. “It was a restrained and light-touch approach in all respects,” says LGA’s Drew Adams, “whether it was how we insulate the building or how we make interventions.”

Indeed, the new additions are designed to be quiet and distinctly contemporary, a counterpoint to the existing building. Washrooms—21 stalls, in a gender-neutral arrangement—are contained within a box that will be clad with white back-painted glass. A classroom and studio to be inserted into the rafters, in a second phase, will be similarly minimal. 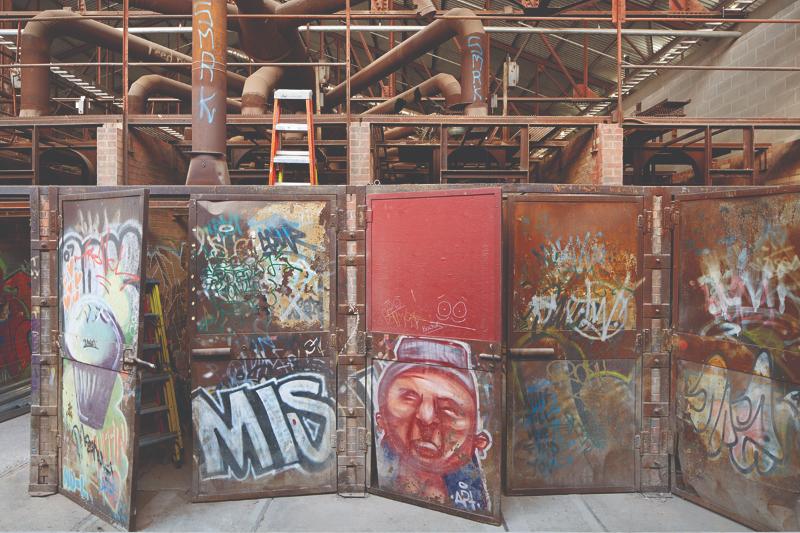 Where the new architecture cuts into the old, it does so quietly. The long, narrow kilns are difficult to reuse, but LGA called for a few of them to serve as the Kiln Gallery; to allow visitors into this sequence of parallel spaces, they designed one crosswise cut, topped with new structural steel that matches the trusses above, and patched the brick walls with reclaimed masonry from elsewhere in the building. It’s almost impossible to spot the architects’ hand.

Similarly, LGA and ERA called for much of the interior detail to be left as is. Graffiti—which was painted while the site lay vacant in the 1990s—hasn’t been cleaned off. Beneath it, the hard-working masonry of the kilns remains in place, its cornucopia of brick spanning thirty years of production and a menu of bonds and weaves. 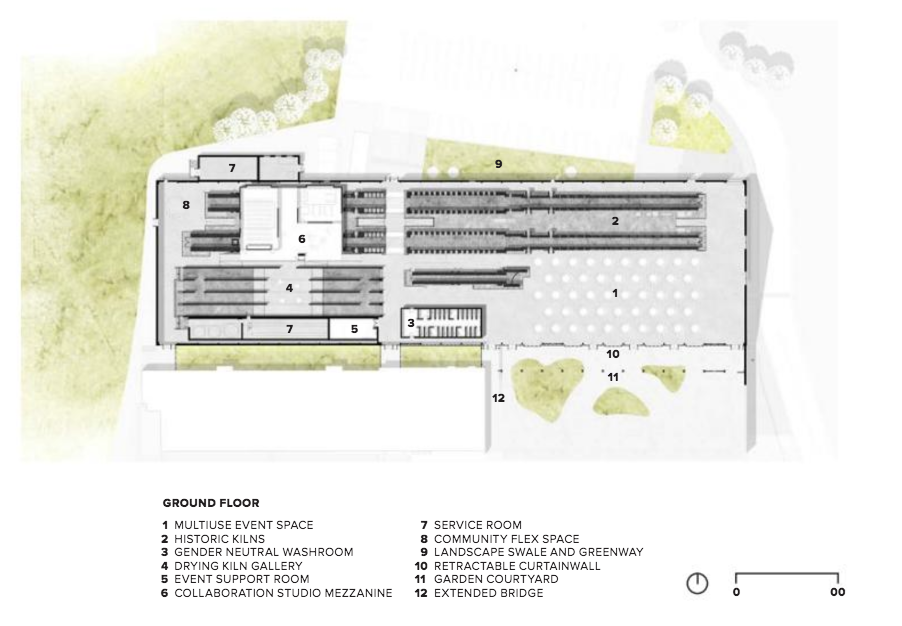 From up above on a catwalk, you can glimpse the whole assembly of architectural elements, “and you can begin to read it,” as Adams suggests. “The way this place worked starts to reveal itself.”

In the future, it will be home to events for rental and also the hub of Future Cities, a new alliance between Evergreen and other urban-focused nonprofits across the country. To Levitt, this place, so redolent of history, is just the right spot to think about the future of cities. “We’re interested in opening up the possibilities of this space and of these artifacts,” she says. “Do you want to put a glass over it so that it never changes? Or do you want to allow it to evolve as we put our contemporary interests into these spaces? I think that’s a more compelling way to look at heritage.” 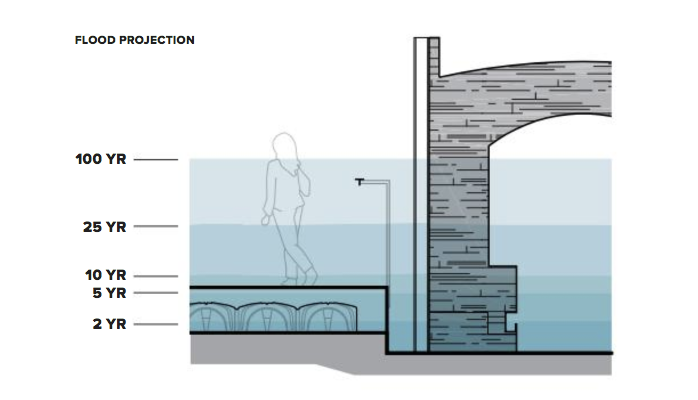 This approach echoes the High Line, that rail-line-turned-promenade, but even more closely Peter Latz’s 1991 Duisburg-Nord LandscapePark. Like that site in Germany’s industrial heartland, Evergreen Brick Works speaks to a vanished industrial past, and there as here the machinery and spaces of the past are treated as artifacts. It’s an approach that treats material history and patina as finite and valuable resources, wisely so. Evergreen and its architects deserve credit for their incremental approach, which allows us to remember that the city, now so unfathomably complex, began with hunks of mud.

Alex Bozikovic is architecture critic for The Globe and Mail and co-author of Toronto Architecture: A City Guide.