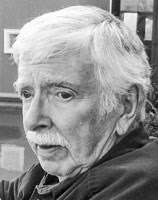 Peter served as Architecture Department Chairperson at the University of Toronto From 1968 to 1976, and introduced a unique and innovative teaching curriculum known as the New Program, which lasted until 1983.

Born in England and graduated from the AA School, London in 1952, Peter joined the Masters Class at Harvard GSD under Dean Josep Lluis Sert in 1958. After graduation he worked for Sert, then went back to teach at the AA, before returning to the GSD in 1962 as an Assistant Professor.

It was there that he met Aldo van Eyck who was a visitor to the Masters’ Program. Van Eyck was a founding member of Team 10 which, in 1953, first challenged CIAM’s doctrinaire approach to architecture and urbanism. Prangnell wrote; “ I owe so much to Van Eyck, it is hard to summarize my debt. Through Van Eyck, I was able to unlock architecture from some of its deadly habits and yet more deadly teaching. The roteness of “how to” and preferred solutions are the deadliest aspects of teaching. I wanted to believe that buildings may be motivated by “stories” just as stage designs may be motivated by plots and characters. Through Van Eyck I learnt that designing a building was a more optimistic activity than I had ever imagined it to be. The pessimistic nature of design is so well inculcated by schools, the profession, the building by-laws and planning regulations.”

Peter moved on to Columbia University from 1964 to 1967 where, with Ray Lifchez, he ran the first year studio and introduced a teaching model which later formed the basis for the New Program at the University of Toronto.

In 1967, he was invited by the new UofT Department Chairperson John Andrews to join the faculty as a full professor and propose changes to the 5 year undergraduate program. In 1968, Andrews resigned as chair to devote more time to his practice and Prangnell was made Acting Chair, then full Chair in 1969.

Prior to John Andrew’s resignation as Department Chairperson, Prangnell’s recommendation was instrumental in the appointment of future Dean George Baird to the faculty. Prangnell had known Charles Jencks as a student at Harvard when he was teaching there.

Jencks advised that Baird should be hired. Prangnell and Andrews both agreed and after some persuasion of Dean Thomas Howarth, they prevailed. In 1969, Baird and Prangnell co-authored an article in Canadian Architect called “Winds of Change” to describe the New Program to the profession. Jeff Stinson, Carmen Corneil and Douglas Engel were also brought on as full-time staff under Peter’s leadership and were pivotal in the ongoing development of the program.

After completing his terms as Department Chairperson, Prangnell remained a member of the faculty, but also taught as a Visiting Professor from 1976 to 1995 at MIT, UC Berkeley, UT Austin, the ILAUD program in Siena, Indesem at Delft, The Berlage Institute in Amsterdam and Washington University in St Louis. He was a regular contributor to Canadian Architect magazine from 1968 to 1990 and to Giancarlo de Carlo’s journal Spazio e Societa/Space & Society from 1980 to 2000. Subsequent to his teaching career, Peter authored a number of monographs and books featuring his impressive collection of his own photographs.

Prangnell is survived by his life partner, architect and alumnus, Tony Belcher. Donations are welcome to the Peter Prangnell Award. https://uoft.me/peter-prangnell

A celebration of Peter Prangnell’s life will be held on March 14, 2023 at 5:30 pm in the Terrace Room at the Gardiner Museum.