For good, and sometimes for ill, Vancouver’s Peter Cardew has become Canada’s definitive ‘architect’s architect’ over the past several decades. For good, he was chosen as the RAIC’s Gold Medal winner for 2012, despite then never having completed a building east of Calgary. Andrew Gruft’s award-linked tribute to him in this magazine was entitled “An Architect’s Architect.” He earned the broad respect of his peers for such meticulously detailed and spatially engaging buildings as UBC’s Belkin Art Gallery and the Stone Band School in BC’s Chilcotin.

As a project designer for Rhone and Iredale early in his career, Cardew shaped Vancouver’s definitive office tower of the 1970s, Crown Life Plaza—now called 1500 West Georgia. David Miller is founder of Rhone and Iredale’s Seattle spin-off (now called Miller Hull, and named AIA’s 2003 Firm of the Year), and says this of working on 1500 West Georgia under Cardew: “It is very hard to create buildings that blend humanity with crisp tectonic form. Peter made it an art. He was a big influence on my development as a designer.” Miller is not alone: ever since 1500 West Georgia opened, Vancouver design firms have voted with their square feet—by selecting this building as home for their studios.

But the discipline and focus needed to pull of being an architect’s architect also comes at a price. The total area of buildings that Cardew completed in the decade after the 1980 founding of his own firm barely exceeds that single half-block-filling earlier work. Canada’s chary procurement rules and often timid embrace of innovation and excellence meant that Cardew never broke through to the large urban commissions that the British-born architect clearly wanted. There is more at play than this standard list of impediments, however, because Cardew sometimes shared Arthur Erickson’s disdain for the money side of architecture. Calgary’s Marc Boutin—who began his career with four years in Cardew’s office (much of it working on the Belkin Gallery)—says Cardew’s disinterest in making a lot of money and his excellence as a designer stemmed from a common source, which he describes as “Peter’s ability to remove himself from minutia, balancing intensive timeframes of focus syncopated with noodling/lateral thinking.” Former Rhone and Iredale colleague Richard Henriquez says that from the beginning, he thought of Cardew as “One of the best designers in this country, with enormous potential,” but also adds, somewhat sternly, “He did not have the rigour to realize architecture was more than design.”

While overseeing the era-defining string of First Nations schools for the federal government out of Vancouver in the late 1980s, architect Marie-Odile Marceau was a key early client for Cardew’s Kitkatla Industrial Arts Shop and Stone Band School commissions, then later became an enduring personal friend. She reflects that architects as talented as Cardew “face a kind of Catch-22, because having no limitations on design abilities, they create their own impediments—their virtues also being vices.” In her view, in the end, “Peter Cardew was content in the limits he imposed on his career and himself.”

Along with the Belkin Art Gallery, the Stone Band School is surely one of the enduring masterpieces of late twentieth century Canadian architecture. Russell Acton, now principal of Vancouver’s Acton Ostry, was Cardew’s sole employee for much of the period of its design. He speaks of his intensive, cyclic design process, with hundreds of tiny changes tested through tracing and reconsideration, redrawn over and over and over. The same rigour was applied to research of site and building precedents, and to the interrogation of building programs. The Stone Band brief indicated a small school with just six classrooms, and budget was never found for the planned gymnasium. Nonetheless, Cardew immersed himself in the Indigenous kitwila pit-building traditions of the Chilcotin, and the primal geometries of those devices of the industrial transformation of their forests—conical metal sawdust burners. Coming hard on the heels of the Patkau’s Seabird Island school (also produced under Marceau’s program), Stone Band did not have the large gathering spaces of Patkau’s Fraser Valley school. But Stone Band’s central area, surrounded by concrete block-walled classrooms and defined by a long wall and edging berm, is the focus of the most considered floor plan of any school in this country.

Then there are Cardew’s drawings. When working with Cardew, Acton was asked to set up on a huge sheet that most James Stirling-esque of drawings: a worm’s-eye axonometric view of the Stone Band school. He recalls spending many hours on it, but the linework was confounding, and he finally gave up, passing it back to his boss. Cardew finished the set-up and the entire drawing, which is now a treasured possession of Marceau’s. Says Acton: “After two years at BCIT and five at Carleton, [Cardew] at last taught me the essence of architecture—detailing as the building-out of an idea, a synthesis.” The Stone Band axonometric was included in Cardew’s 1996 exhibition at Emily Carr’s Scott Gallery, and a portion of it was on the cover of the accompanying catalogue, making it one of the few permanent records of his drawings that we retain. The exhibition and catalogue title—Ordinary Buildings—is classic Cardew: simultaneously humble and boastful. Yes, he makes “ordinary” buildings… in the same way Donald Judd makes “ordinary” sculpture, or Thomas Pynchon makes “ordinary” novels! 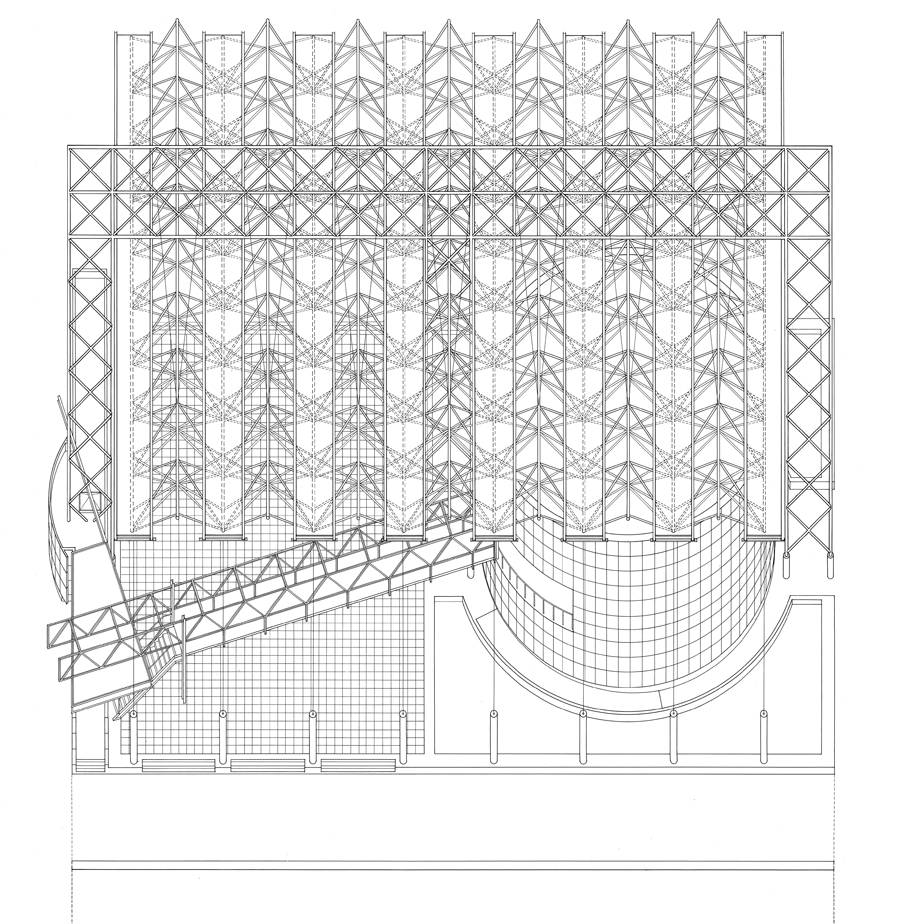 Peter Cardew was born in 1939, growing up in London’s Home Counties under the pallor of war, with his father killed in a 1941 Royal Air Force crash. Peter would speak of his love of concrete born in the safety of pre-cast bomb shelters. He was briefly relocated to Lancashire, then went on to public schools while his mother worked in Africa. He interrupted his architectural studies at the Kingston School of Art with a year working for Stuttgart’s Max Bacher on an exhibition pavilion (a key portfolio piece for his superb work at Expo 86), graduating in 1963. By the time he emigrated to Vancouver in the fall of 1966, he had already designed, built, published, and received awards for a special needs school in Kent. The transition to Canada was not easy. He once recalled to me about the November of his arrival: “It rained continuously morning, noon and night for the first two weeks I was here—I never saw the mountains once!”

Along with his umbrella, Peter Cardew brought to Vancouver a deep knowledge and personal experience of the early works of James Stirling, especially his 1963 Leicester University Engineering Building (a clear influence on 1500 West Georgia and his art galleries) and the Oxford Florey Building, designed in 1966. This set Cardew apart from a post-Expo 67 design scene that, in eastern Canada, was dominated by ideas from Harvard and Chicago. Stirling’s influence is also evident in his first multi-family residential project—a set of townhouses on False Creek, with maritime windows and a generosity of light, despite a narrow plan.

As was true for his brilliant infill project fifteen years later for four flats and a workshop around a Paris-style hard-surfaced courtyard on Odlum Street, what is baffling is that so few others carried on the intense livability and visual swerve of the False Creek townhouses after Cardew’s pioneering experiment. While mouthing admiration, architects, developers and especially planners seemed threatened by his innovations, which had not been validated elsewhere, that default neurosis so endemic to the Canadian mind. “They changed the bloody regulations so it would never happen again,” says Cardew of Odlum Live-Work Housing, which created homes for four families on the site of a decaying single wooden house.

Cardew certainly had rigour in his personal life, rising at 5:00 AM daily, bicycling across the city for a swim at the YMCA, then on to the studio by 8:00. All of us who knew him thought of him as being the perfect gentlemen: a somewhat obsessive chap on the English model, guarded but kind. With his strong sense of art and detail, he was the closest we have to a Sir John Soane for our times, and if a fanfare is played in his honour when conditions permit, it should be Elgar’s “The Enigma Variations”—that, or a skiffle band. Some of Cardew’s great successes were in BC’s Interior, notably two phases of industrial structures and offices for forest giant Lignum, and an art gallery and government building for Kamloops, produced with Nigel Baldwin. Several houses designed by Cardew were spectacular—such as the hillside perch for design entrepreneur Martha Sturdy—others for Vancouver’s westside are notable for their quiet liveability, formal or tectonic quests never getting in the way of the rooms they served.

Cardew designed cafes and retail shops along the way, but that side of his practice picked up in the past decade, notably with stores in Toronto and Los Angeles along with a pair in their hometown for Vancouver-based streetwear firm Reigning Champ. These are Cardew’s closest brush with minimalism, aided by the fact that these are a mainly-online retailer’s sparsely-stocked showrooms—intended as much to quietly impress as to move the merchandise. The Robson Street Reigning Champ is something of a meta-project, with references back to the Belkin Gallery, with its white ceramic tiling contrasting with wood highlights in thin columns, and rotatable product display units hovering above bare concrete floors.

Passed over (as were all Canadian designers_ for the Vancouver Art Gallery commission, Cardew plugged on with his own speculative and ingenious scheme for a largely underground extension of VAG’s current home in a 1984 Erickson renovation of a Rattenbury courthouse. When Herzog and de Meuron’s Inukshuk-in-a-palisade VAG scheme received an underwhelming response from critics, private donors, and even the federal government (who have yet to invest a cent in the proposal), Peter Cardew redoubled his effort right through the last half decade of his life. He produced a wonderful video about his VAG redesign, one of the finest feats of design communication ever compiled by a Canadian architect. According to Russell Acton, Cardew’s VAG proposal is ever more “brilliant, obvious and buildable.”

Nowhere is the downside of an architect’s architect rising to the scale of huge public buildings more apparent than in the enduring controversy dogging Peter Cardew’s closest European equivalent, Peter Zumthor, in his elephantine proposed re-build of the Los Angeles County Museum of Art. A Saskatchewan colleague said this of Regina’s Clifford Wiens, but the summation could apply equally to Cardew and Zumthor: “A perfectionist in an imperfect world.” That said, where would we be without such dreamers? Like Wiens, Cardew left no full monograph from a publisher to document his work, as books are expensive and/or time-consuming for architect’s architects, but more importantly, there is always the issue of perfectionism in an imperfect medium.

The enduring memory I have of Peter Cardew is an image of the layered tracings he would huddle over for hours in his studio. He repeatedly redrew what had been decided, then probed what had not been. Sometimes these tracings would be pinned up to examine, just as often another layer would be pencilled out on top of them—the geological layerings of a fine design mind at work. Canada is better for the tracings of his life.