Massey worked in partnership with architect Arthur Erickson from 1963 to 1972. The duo created projects including the Simon Fraser University campus, the MacMillan Bloedel Building, and the University of Lethbridge’s University Hall, along with an initial plan for Robson Square.

Geoffrey Massey’s father, Raymond, was an academy award-nominated actor. His uncle, Vincent, was Governor General of Canada, and headed a royal commission on the arts that resulted in the influential Massey Report. Geoffrey was a fourth-generation member of the family that founded farm equipment manufacturing company Massey-Harris, later Massey-Ferguson.

Geoffrey Massey was born on October 29, 1924 in London, England, to Raymond Massey and Peggy Freemantle. His parents divorced in 1929, and Geoffrey was raised by his father and second wife, Adrienne Allen. The family moved to the United States in 1939, and Geoffrey joined the Canadian army in 1942, becoming a paratrooper. He subsequently studied architecture at Harvard, while Walter Gropius was director of the school. After graduation in 1952, Massey worked briefly in Montreal before moving to Vancouver.

In Vancouver, he worked with Sharp & Thompson, Berwick and Pratt, and became friends with Arthur Erickson, who had also worked there. They were housemates in a small place on Chilco Street, where they lived rent-free in exchange for designing a six-storey apartment that would eventually replace the house. They were known for throwing parties whose guests included young artists and architects such as Jack Shadbolt, Ron Thom, Barry Downs, and Takao Tanabe. They later rented a house together on Bachelor Bay in West Vancouver.

Eager to work on their own, Massey and Erickson worked on a series of houses for acquaintances, including a house for artists Gordon and Marion Smith. In 1955, it won the first Massey Medal in the category of residential houses under $15,000.  (A decade later, Erickson would design another, much larger, house for the Smiths .)

Erickson and Massey also designed a house for artist Ruth Killam, a childhood friend of Erickson’s. Massey and Killam fell in love during the project, and later married, living together at the house, which overlooked Howe Sound. Over the years, Massey created a number of additions to the Whytecliffe property, including a studio that, tragically, was lost in a fire, along with many of Massey’s original drawings.

“I always felt their pavilion-like West Vancouver home designed originally for Ruth Killam was the coolest house anywhere, perfectly integrated into the most spectacular waterfront site in Canada, and adorned with Ruth’s wonderful artistic creations inside and out. It was always a treat to visit—by land or sea,” recalls Geoffrey Erickson, Arthur Erickson’s nephew, who visited often with the Masseys as he was growing up. 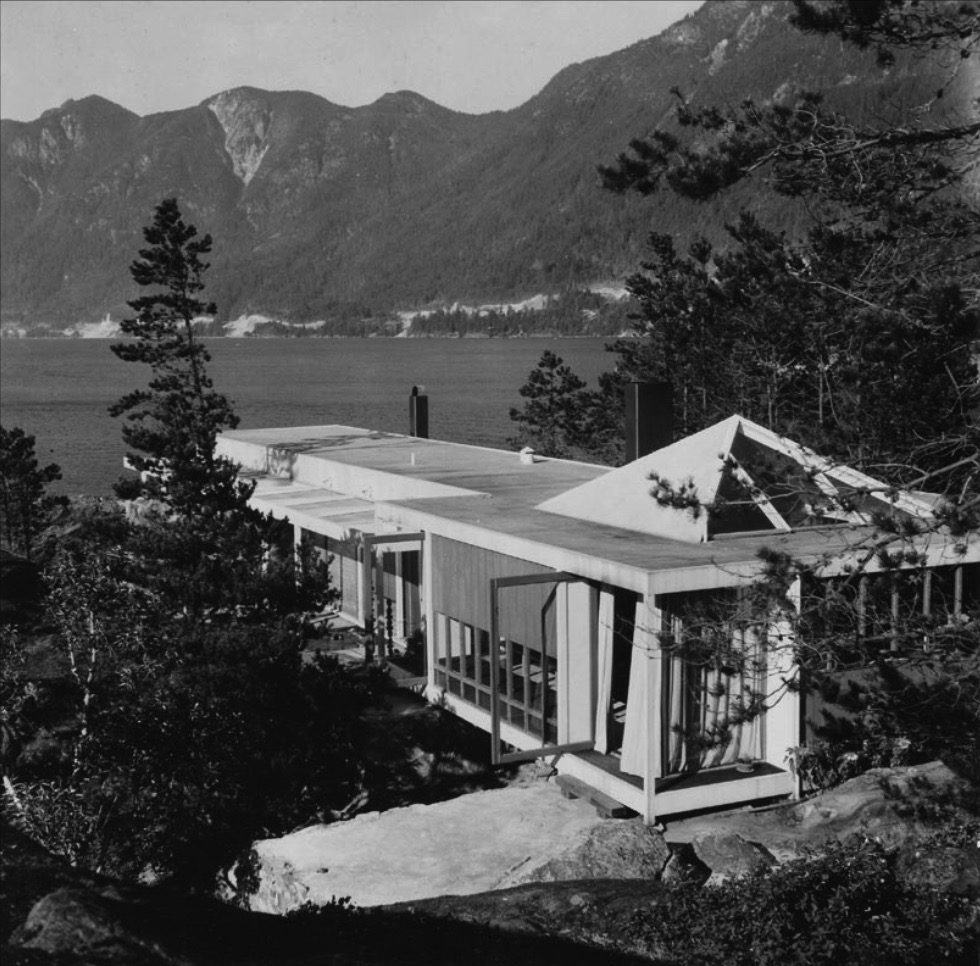 In 1963, Massey and Erickson’s business partnership formally started when they teamed up to bid on the design for the new Simon Fraser University, atop Burnaby Mountain on the outskirts of Vancouver. Their bold masterplan won the design competition, and they worked with associate architects Zoltan Kiss, Rhone & Iredale, Robert Harrison and McNab Lee & Logan towards completing and opening the university two years later.  Erickson and Massey held complementary roles: Erickson led the design, while Geoffrey provided the administrative oversight essential to realizing a project of this breadth and complexity.

Lethbridge University, designed in 1968 and opened in 1972, displayed a continuation of architectural thinking inspired by ideas of “megastructure,” or buildings constructed at the scale of their natural landscape settings. The plan conceived of a university complex that interwove instructional spaces and informal living areas.

“Geoff was the anchor,” says Bo Helliwell, who worked with Erickson and Massey from 1968 to 1972, a period when Erickson was frequently traveling. Helliwell says that Massey also had a role as a “rainmaker for the firm”—due to his family connections, as well as his physical presence. “He was tall, ridiculously good looking, had a radio announcer’s voice—he had a big presence and hearty laugh.”

The partnership ended amicably in 1972. Massey told a reporter that their interests over the years had changed, and that he and Erickson thought that “it might be more satisfactory to go separate ways.”

Massey was elected a Vancouver City Councillor later in 1972, a position he held for two years. During that period, he played a part in the selection of the winning design for the rehabilitation of Granville Island, by Norm Hotson and Joost Bakker, who entered with the support of their employer, partner Richard Rabnett of Thompson, Berwick and Pratt.

Massey also was a supporter of Art Phillips, who was mayor of Vancouver from 1973 to 1977. Mayor Phillips championed livability and inclusivity, and under his leadership, Vancouver’s city planning came to address environmental and quality-of-life concerns.

Massey continued his own architectural practice over the following decades, working mostly on private homes. His work included a number of projects in Whistler, an area in which he was an early owner and developer.

“Geoff was a really decent person, a really nice guy,” recalls architect Paul Merrick, who worked with Thompson, Berwick and Pratt in the 1970s. “He was kind and gentle, and very easy to like—a big man with a strong presence.”

Throughout his career, Massey was a behind-the-scenes advocate for architectural culture in Canada. He convinced his uncle, Vincent Massey, to hold an invited competition for the design of Massey College at the University of Toronto. He advised on the selection of Arthur Erickson, Carmen Corneil, John B. Parkin and Ron Thom as the invited competitors.  Thom’s design won, resulting in one of the country’s finest works of architecture.

“I came to know [Geoffrey Massey] late in his life through book and advocacy projects that we worked on together,” recalls critic Adele Weder. “He was like a taciturn elder full of memories of an amazing period in Canadian architectural history, stories that he would mete out on rare and treasured occasions. I am so grateful for what he has shared with me and others.”

Geoffrey Erickson says that while Massey was “not a self-promoter,” both he and his wife Ruth were impressive in their abilities. “Ruth was part of the Yellow Door Studio painting group with my grandmother Myrtle Erickson, and became an accomplished painter. Fortunately, the Massey children—Raymond, Vincent, Nathaniel, and Eliza—all inherited their parents’ artistic sensibilities, which they now express in film, photography, and ceramics.”

Massey retired from architecture in 1991. His wife, Ruth Killam, died in 2011. He is survived by children Eliza, Raymond, Vincent and Nathaniel.