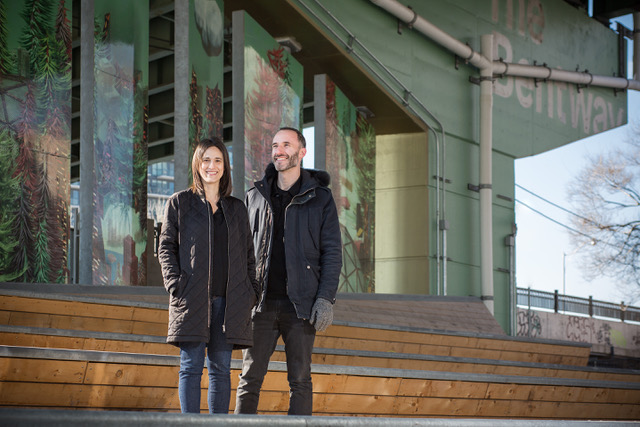 The duo joined the Bentway in 2017 – Altman as Director of Programming and Carey as Director of Development. Bentway Board Chair Mazyar Mortazavi says, “As the Bentway evolves as a destination for cultural experiences and a leader in urban transformation, we are excited to benefit from Ilana and Dave’s individual areas of expertise. They understand the needs of the Bentway firsthand and have the commitment and creative vision to steer us towards an exciting future.”

An expert in leading start-up initiatives for the performing arts, Founding CEO Julian Sleath has made the decision to resign, but will stay on until May 17, 2019, supporting Altman, Carey, the Board, and the Bentway team during this transition.

Mortazavi added, “Julian stewarded The Bentway through its design and construction, helping to build enthusiasm with stakeholders, building a terrific team, and initiating operations through an incredible first year. The extraordinary success of the Bentway so far has been realized through Julian’s depth of experience and while his enthusiasm and passion will be missed his leadership has provided the foundation for the future success of the Bentway. We wish him the best of luck in his future endeavours.”

Through the 2019 spring and summer season, the Bentway continues its diverse and exciting programming with New Monuments for New Cities (an open air art exhibition organized in collaboration with the High Line Network); a new dance commission by famed Montreal-New York choreographer, Noémie Lafrance; the return of the annual block party; a new community dining program that will treat diners to a variety of culinary cultures; as well as regular free weekly programming including yoga and tai chi classes, and the “Sunday Social” with music, games, food and beverages.