An Illuminated starlight house, with a cascade of colours, kaleidoscopic mirrors and arches of sweet-sounding bells are just some of the sights and sounds that visitors to Toronto’s downtown Waterfront can experience this winter when the winners execute upon their designs for the third annual Ice Breakers Exhibition presented by PortsToronto.

A collaboration between Winter Stations and the Waterfront Business Improvement Area (WBIA), along with PortsToronto, the temporary exhibit will have five public art installations erected along Queens Quay West, drawing Torontonians back down to the water’s edge during the winter months.

“As a sponsor of Ice Breakers, PortsToronto is supporting an initiative that brings colour, warmth, and activity to the water’s edge, inviting people out of their buildings to take a winter walk along the Waterfront and appreciate Toronto’s unique landscape at this time of year,” said Deborah Wilson, Vice-President, Communications and Public Affairs, PortsToronto. “We are thrilled to once again support this art exhibition and look forward to seeing the 2019 winning installations further brighten the city’s lively winter waterfront.”

This year’s exhibition will feature four winning installations, which emerged from an international design competition. Teams from Hamburg Germany, and Athens Greece, will be joined by two local groups, as well as a student installation contributed by Ryerson University. Each of the designs respond to this year’s exhibition theme “Signal Transmission.”

“The theme is open to interpretation, and we were hoping to see work that’s both challenging and accessible. Ice Breakers and its sister competition Winter Stations are reminders that public art can and should be fun, engaging and open to everyone,” says Roland Rom Colthoff, co-founder of Winter Stations.

“Signal Transmission may be approached as an exploration of data, digital and analog communication, including the various modes and codes involved; it may also veer into the realm of biology, ecology and sociology. Simply, Signal Transmission is about how humans and other species speak – to each other and to our self, internally,” says Justin Ridgeway, another Winter Station co-founder who is also responsible for the competition brief each year.

“We’re thrilled with the installations chosen by this year’s jury. Ice Breakers is one our premier events in the wintertime and a reminder that the waterfront is one of Toronto’s best attractions all year long,” says Tim Kocur, Executive Director, The Waterfront BIA.

All five Ice Breakers installations will be on display along the Waterfront beginning January 19. The exhibition will run over five weeks, overlapping with the debut of the fifth anniversary of the Winter Stations competition in The Beaches on Family Day. 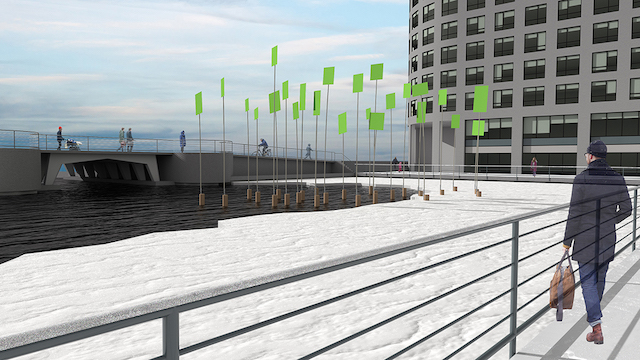 Twenty-five wood buoys are anchored in a basin, each with an arm extending upward and holding a placard of bright chroma key green. Individually, the buoys could be mistaken for a new kind of marine marker, but as a group they resemble an organized group of protestors occupying a public space. 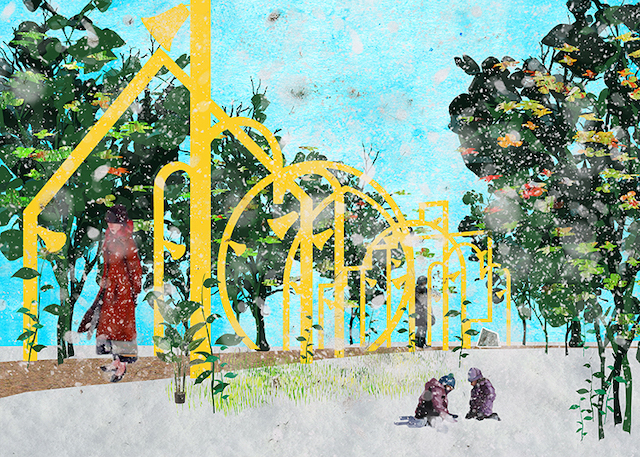 As you make your way through the installation, a plethora of gates emerge reminiscent of various traditional architectural styles from around world. A short trip bridging the gap between the digital, tangible and audible ecumenically shared experiences of when,what and where is that which we call home. Made from yellow painted wood and metal connections these gates can be seen from afar and beckon you to interact with them. Bells are mounted on the different gates of the installation and can be activated by the people passing through or by wind or snow falling on them. 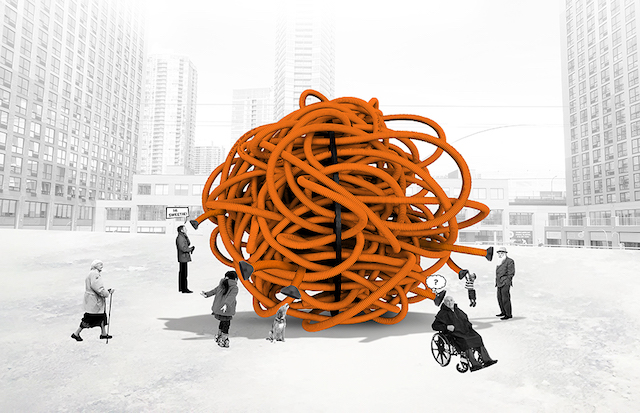 The Connector is a playful, interactive communication device based on the beginnings of telecommunications where cables were still laid above ground. The Connector lacks an operator, so communication becomes a game; the conversation can be searched but who responds or receives the verbal signals is not immediately apparent. 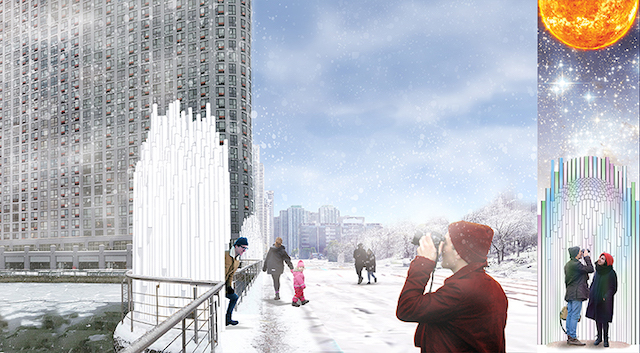 Stellar Spectra is a place of light, the signal from the stars split into two sculptural columns of starlight rooms: warm and cool lighthouses by the water. As the sun, earth’s closest star, shines from above, it refracts through the filters. Together the shafts create a spectrum of light. The cascade of colours spreads throughout the spaces and onto the stargazers. 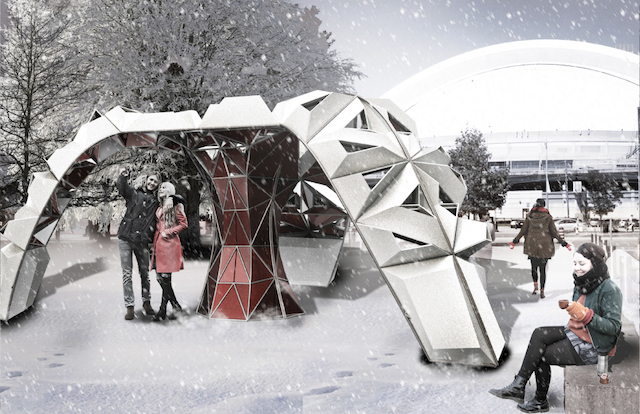 With constantly developing technological advances, social media is beginning to change the way architecture is experienced. Rather than being an appreciation of spatial conditions, architecture is being seen as a very ocular-centic art – to the viewed on screens and experienced through various media outlets. This design brings the idea of the ocular-centric experience of architecture to light through the faceted reflective interior condition. The kaleidoscopic effect of the interior is reminiscent of an image driven society.

More information about the Ice Breakers exhibition is available here.

Call for Sessions: Society for Study of Architecture in Canada conference