Over the past year, DIALOG have been designing a prototype for a supertall zero-carbon hybrid timber tower; we’re calling it the Beacon of Hope. At 105 stories, the Hybrid Timber Tower (HTT) would be the tallest building in Canada; it would also be one of the most sustainable.

The HTT features façade-integrated photovoltaics (PV) and a natural gas-fired district energy system combined with an innovative algae bioreactor to reduce operational carbon to zero. A patent-pending, prefabricated, composite Hybrid Timber Floor System (HTFS) combined with a diagrid steel structure and concrete core slashes embodied carbon almost in half compared with an all-steel-and-concrete system. The HTT would contain 14 times as much mass timber as the current world record-holding tall wood building. For a structure of this scale, we consider it a huge design achievement. 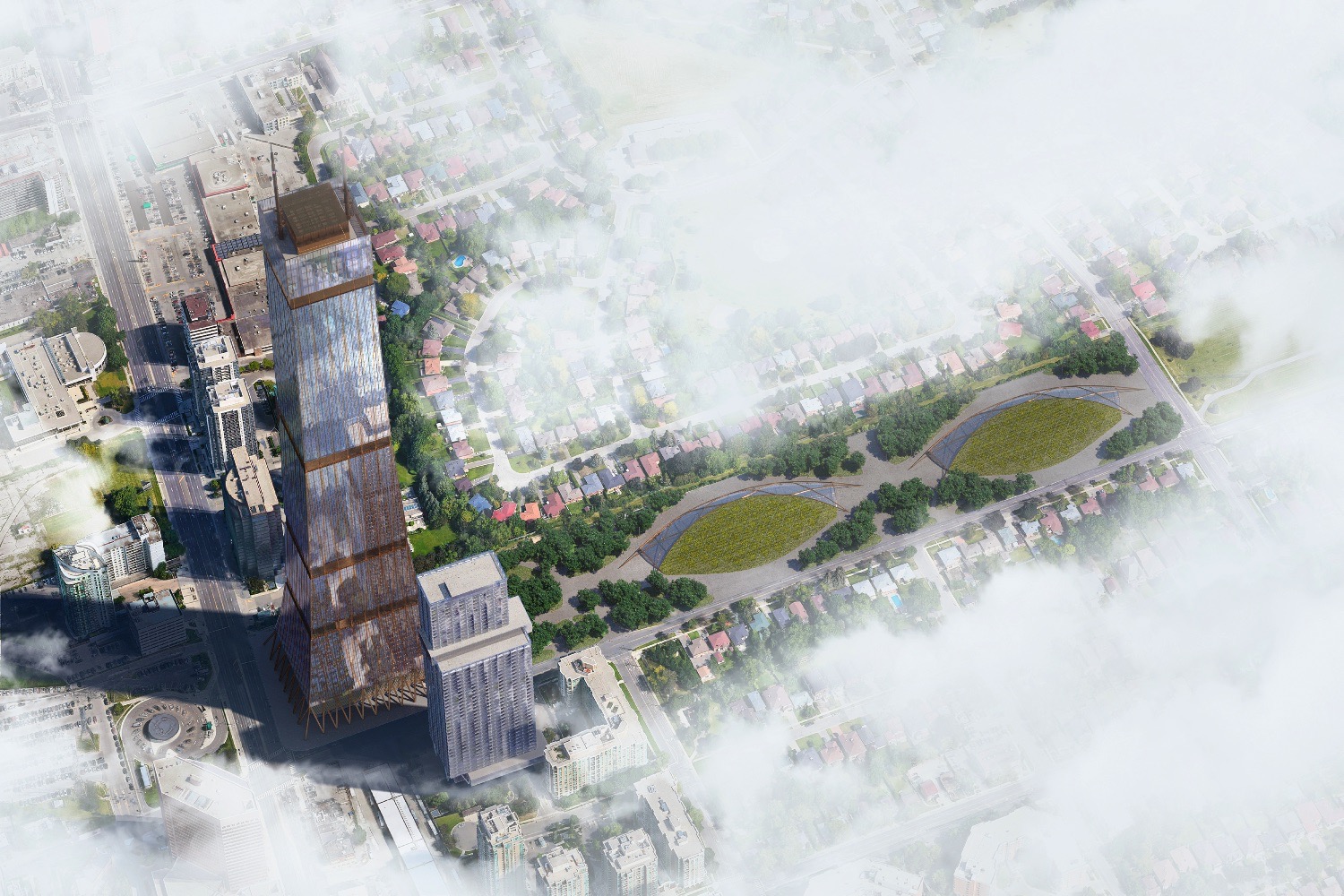 We believe that we need big statements like this. DIALOG has joined many other Canadian architecture firms in signing the AIA’s 2030 Challenge pledge to make all our buildings carbon neutral by the end of this decade. It’s an ambitious target and, if we’re being totally honest, a daunting one. Accounting for around 40% of total global carbon emissions, the building industry is a big part of the problem. It can feel like a heavy weight to carry. That’s why this project has been a beacon of hope for our integrated practice—it has invigorated and energized us.

One simple question started the entire journey: How can you build a clear span of 40 feet for a Class A office building using mass timber? Architect Craig Applegath and structural engineers Thomas Wu and Daria Khachi sat down at opposite ends of the country to try and find the answer.

“I was in Vancouver, and Daria and Craig were in Toronto, and during the meeting, I kept hand-sketching this and showing it to them,” Thomas told me, holding up the original sketch.

“We came up with this Hybrid Timber Floor System, and proved it by calculations and computer modeling,” Daria added. “We had it peer-reviewed by other engineers, including Jim Montgomery in our Edmonton studio. So that set the tone – that yes, we can do this. We can go long-span, 40 feet.” 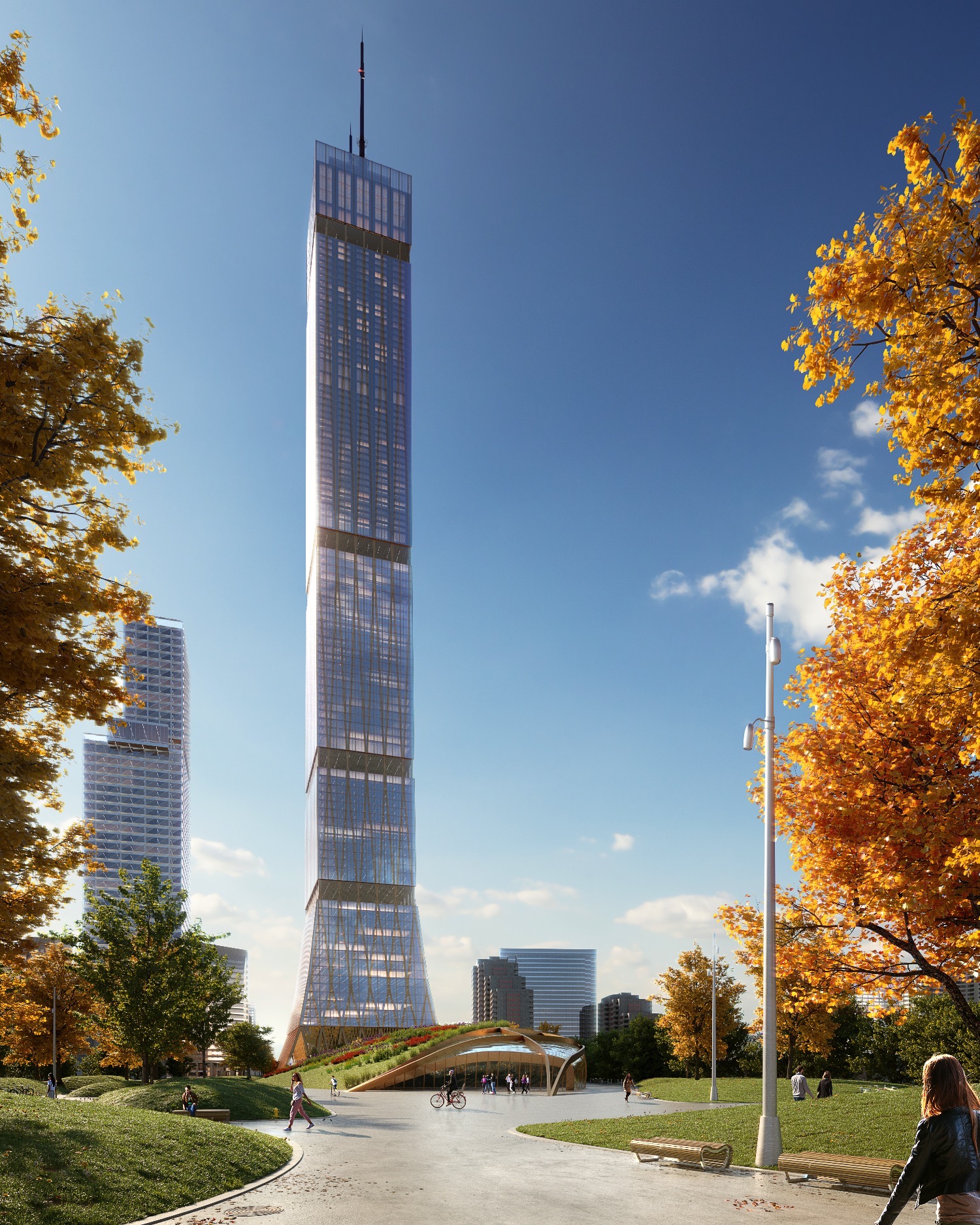 Mass timber is currently constrained because it can only economically span about 26 feet, suitable for residential structures but not for Class A office space. The HTFS encases post-tensioned cables in steel cages, in a concrete trough that is then recessed into a CLT wood panel to achieve those longer spans.

The team recognized early on that this innovation could help wrest mass timber out of its small-span niche, but they needed to make sure it could be constructed and be cost-competitive. That’s where a chance meeting comes in.

At a trade show booth in Portland, Craig Applegath met Mark Gaglione, manager of building and material sciences with EllisDon.“We were at a big mass timber conference,” says Mark, recalling how he first heard about our project. “Our R&D team got pulled in for their mass timber expertise, and our Toronto buildings group also got involved, because they’re the ones with the pricing information for the supply chain.” 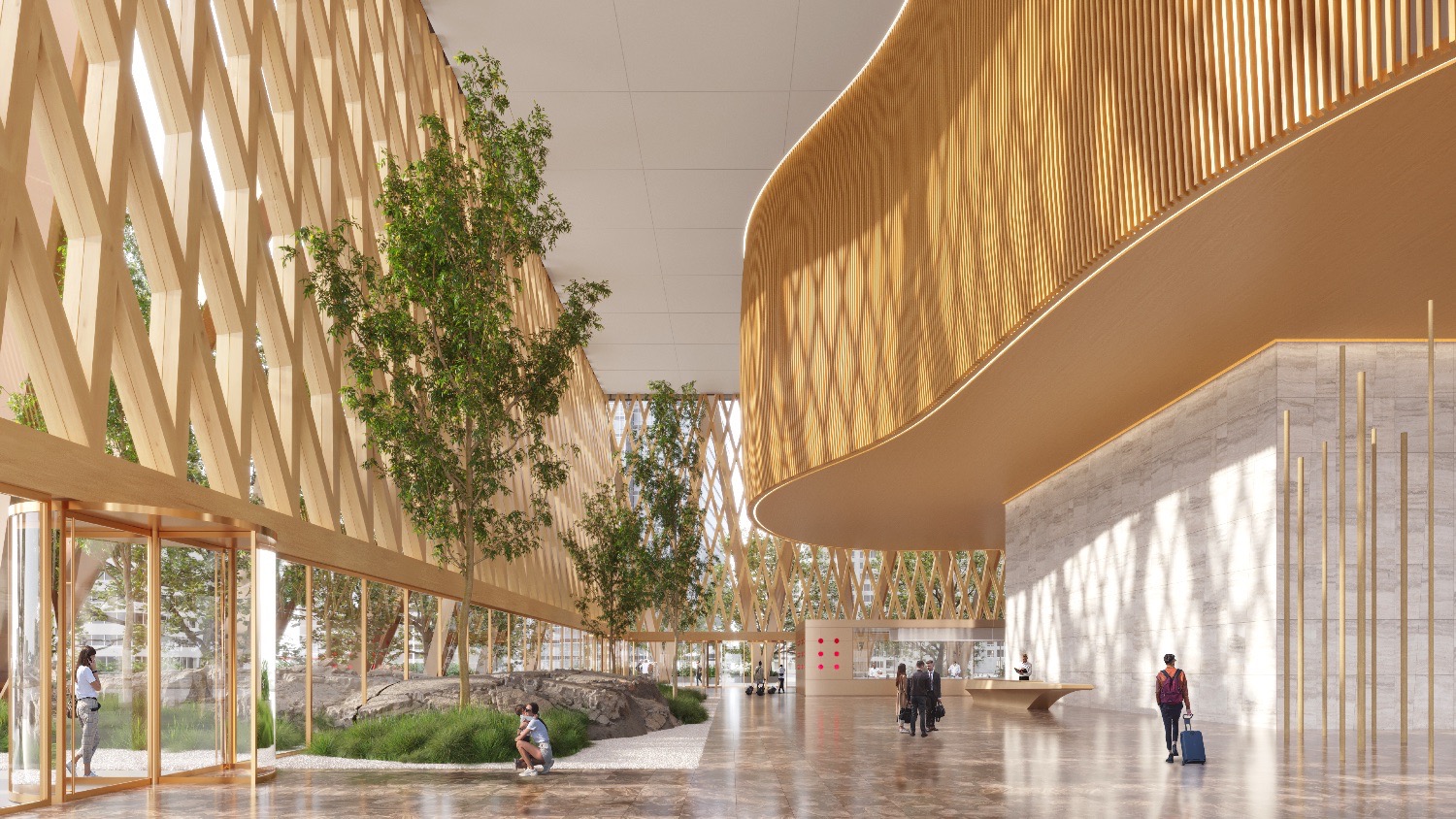 Mark and the team at EllisDon were able to demonstrate that not only was the system viable from a constructability standpoint, but the cost premium for the system was in line with other structural innovations.

Once the team had a proven concept, they wanted to demonstrate that it could work in any building type. That’s what spurred the idea of a supertall structure.

“It’s six buildings that are just stacked on top of each other,” says project architect Cam Veres. “You could make this into six towers and still apply all the same principles.” (In fact, DIALOG is currently working on a 40-story version of this prototype with a major Canadian developer.) 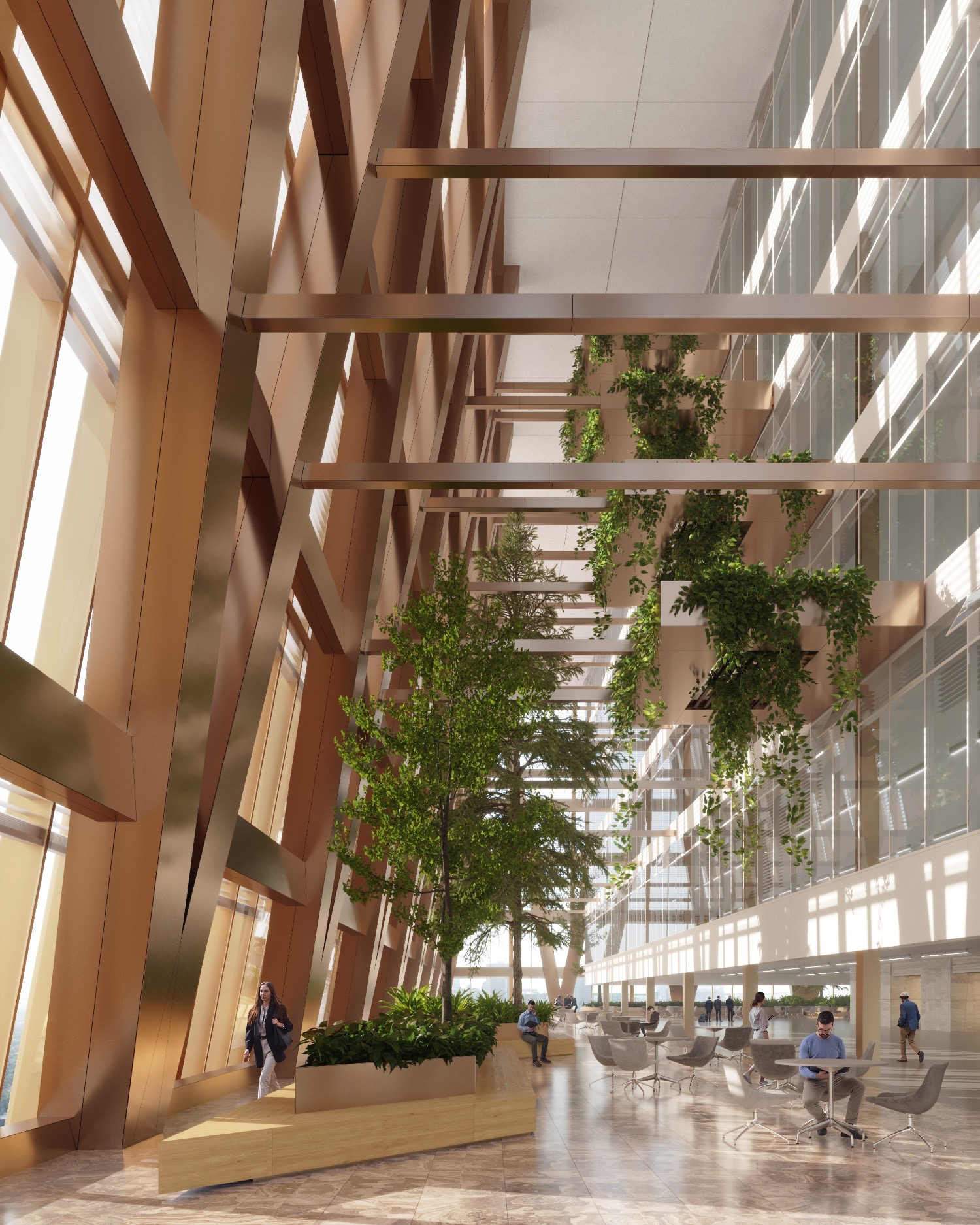 The core technologies that comprise this “huge solution” and help the building achieve net-zero operating carbon are the façade-integrated PV and the algae bioreactor.

Photovoltaics deliver nearly 25 percent of the building’s electricity demand, an amount that Morgan Solar’s Samuel Buckstein describes as “significant.” “Even getting more than single digits on a building like that is above and beyond right now.”

The remaining energy for electricity, heating, and cooling is delivered by a natural gas-fired district energy co-gen plant, paired with an algae bioreactor by Pond Technologies to remove CO2e emissions. Emissions from the plant are injected into a tank of water that is illuminated by high-intensity LED lights, and are entirely captured by the growing algae. What got the team even more excited was the possibility of using the algae to restore land, potentially capturing even more carbon. According to Peter Howard at Pond: “We have been able to identify algae that are actually nitrogen fixers in the soil. You can bring something as barren as a desert—or contaminated or over-tilled land—back into grassland or forest.”

In fact, algae from the bioreactor could be used to remediate old oil and gas sites—which brings us to the topic of natural gas. In the future, we could look at alternative fuel sources for the tower’s district energy system, but for now, we need to find ways to work with this fossil fuel.

“With natural gas, we’re meeting Canada where it is,” DIALOG sustainability lead Charles Marshall explained. “We recognize the challenges with fugitive emissions; natural gas extraction and distribution are both problematic in their own ways. No one has a solution for that other than to stop using natural gas entirely, which is 30 years away. Our system can flex the fuel in the future; this could become the zero-carbon hydrogen tower.”

The district energy system and bioreactor combination allow the HTT to be entirely off-grid. But because we have generously sized the power plant to account for peak demand, there will be excess energy.

“There will be surplus capacity of zero-carbon, zero-greenhouse-gas energy that we will be able to export to our neighbours,” says electrical engineer Naresh Arora. “And we can always oversize on day one, or add more capacity later on as we see more demand.” In this way, the building becomes a utility: the team refers to this as “net(work)-zero”. 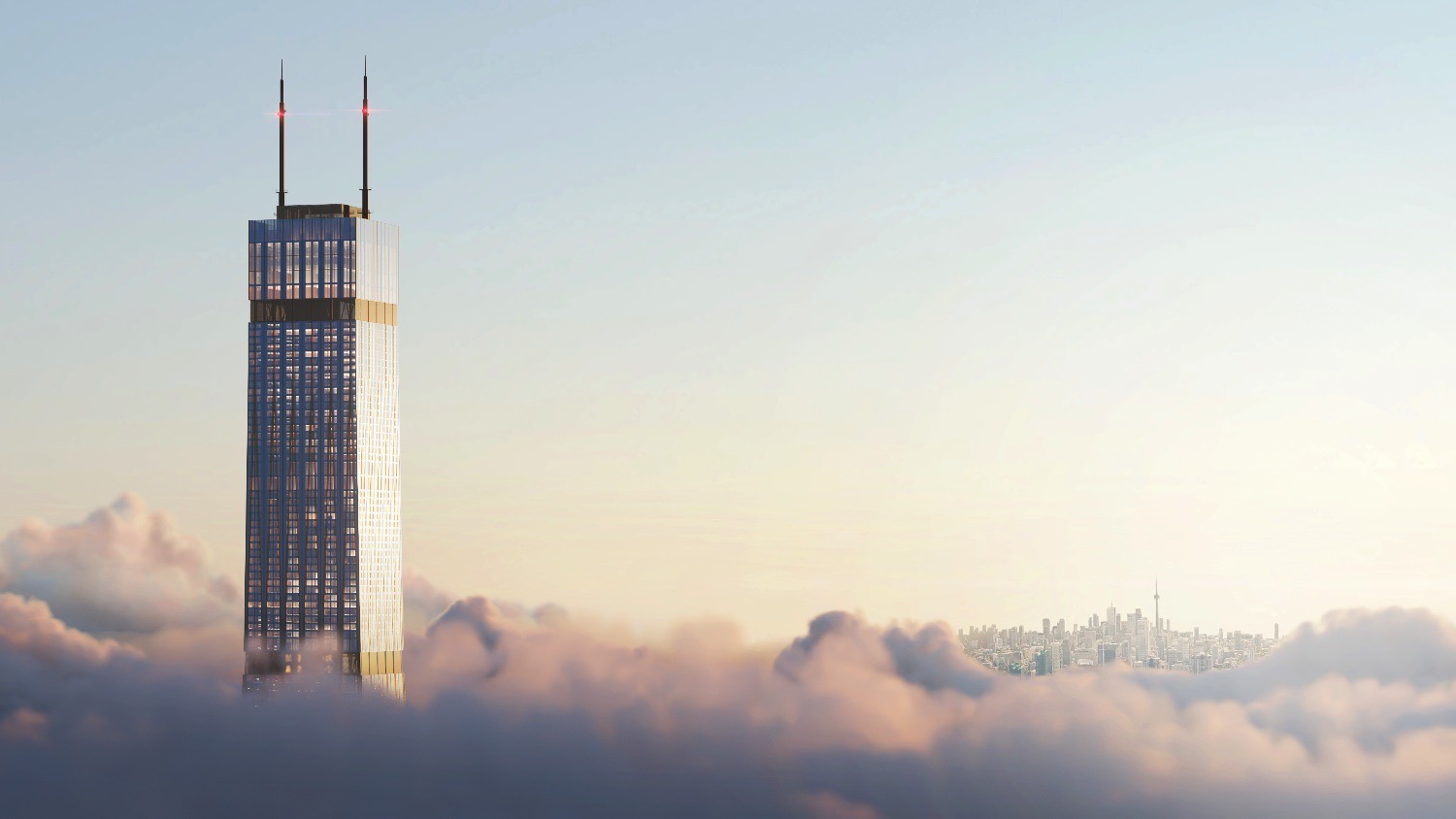 But it’s clear from speaking to everyone that this project is about much more than just energy and carbon: it has been an exercise to reconnect with our core values and our inspirations as designers. Cam summed it up nicely in this story he told me: “My son came in and asked me, ‘what’s that?’ I started showing him, and he was just like, ‘That is so cool!’ I thought, ‘It really is!’ When I wanted to be an architect when I was his age, I was playing with LEGO; this was the sort of thing that I wanted to aspire to.”

This HTT project represents our firm’s beacon of hope. Personally, my greatest hope is that this project—and others like it—inspire practices across Canada to search for their own solutions. We’re going to need as many great ideas as we can get if we’re going to meet our obligations to the planet and avert climate disaster.

SAPL announces winners of the CBDX: CITIES FOR ALL competition