By 2014, the federal government had provided Yukon College with funding to create a centre that could offer local education, training and research in Yukon. The selected six-acre site is located at the north-east corner of the Yukon College campus, near the Yukon College Arts Centre, on a plateau with expansive views to the Yukon River Valley. The design team had to work around the presence of a major high voltage line to the north and Yukon College’s ring roads to the west. The site, 77 metres above the downtown area, is mostly flat and needed little intervention, an important asset given the weight of vehicles such as giant graders, which have to be maneuvered on firm, stable ground.

Like many industrial and education buildings in Canada’s oft-neglected remote northern locales, the CNIM could well have been constructed as a bulky shed in the landscape. Instead, Kobayashi + Zedda Architects designed it as an elegant and thoughtful hybrid comprising a compact training centre and what they called the “Shop”—a huge, flexible space where workers are instructed in the use and maintenance of heavy equipment as well as trained in various skills such as carpentry and welding. The Shop also houses a number of CNC machines and welding terminals.

Leading the design team was KZA partner Jack Kobayashi. “To meet the tight budget, we specified an inexpensive, pre-engineered steel frame building for the main shop,” says Kobayashi. “However, rather than simply adhering a facade to hide the featureless shed, we decided to layer it with a foreground building that would simultaneously contrast with—and complement—the mass and volume of the larger structure.”

The large, rectangular Shop volume is clad with embossed metal panels that are white in order to keep the polyurethane foam insulation sandwiched between the panels from absorbing too much solar heat during Yukon’s extended summer daylight hours. It was feared the increase in temperature would potentially damage the adhesive and result in the delamination of the insulation from the metal sheeting over time. The choice of white also helps limit the overwhelming visual impact of this oversized structure.

The smaller volume, for education and training, is sheathed in dark fibre-cement panels. Its entry facade is punctuated with wood slats and a yellow corrugated metal panel, directing one’s eye to the southeastern edge of the building where the three classrooms are located. The architects planned the structure and floor layout of the Shop in such a way that it could be divided into two spaces if future needs require it. A large bifold door was specified to allow access for high-clearance mining vehicles. The Shop was also designed for the carpentry program workers and trainees to be able to construct in a controlled environment the modular buildings needed for mine sites before shipping them whole.

The building contains three classrooms, an office area, and a Personal Protective Equipment (PPE) area, which acts as a transitional zone between the Shop and the training area. While the shop wing adheres to the campus grid, the classroom wing is rotated slightly, oriented to capture views and break up the visual impact of the larger mass. 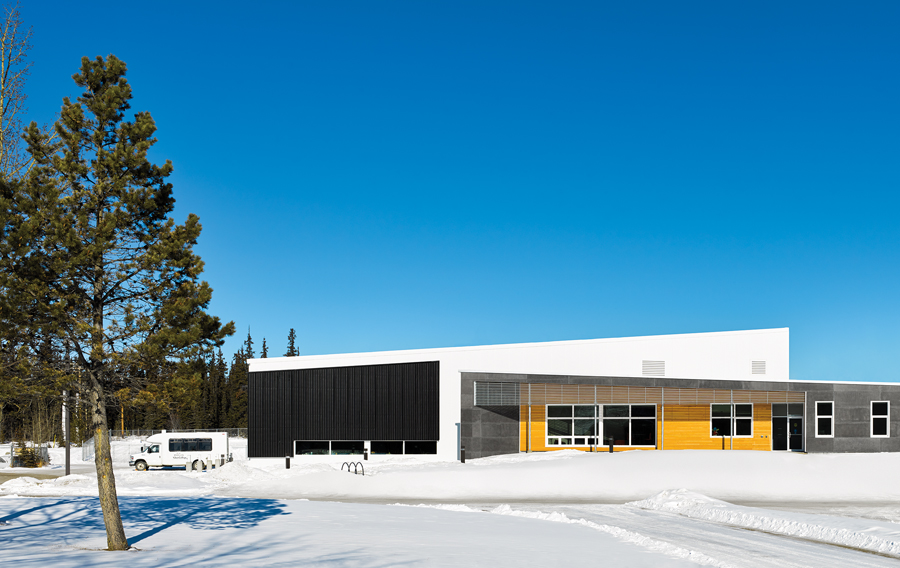 The PPE zone linking the two wings acts as a fire separation area between the shop and classrooms. The saturated red environment serves as a forceful visual reminder to students leaving their classroom that they must don protective gear before entering the Shop. Both subliminally and overtly, the use of such strong color signals the fact that one is entering a safety zone.

In this northern city, where temperatures in winter average -24oC and daylight is reduced to 6.5 hours, a building needs to take as much advantage as possible from weather and natural light conditions. The CNIM is connected to the Yukon Campus district heating system, but a large solar wall installed on the western facade helps preheat incoming air through the ventilation system. The Centre features large amounts of day lighting and passive solar heating through large glazed window walls and a skylight.

As with most industrial buildings, the College’s design directive was simple: the creation of as much floor space as the limited budget would allow. By keeping fire separation zones confined, working with the site’s natural topography, using economic materials in imaginative ways, and taking care to use local labour, the design team was able to provide the College with a full 80% more floor area then they were expecting — an amazing accomplishment on the part of the architects. What’s more, they have achieved a building of quiet elegance, to serve the community for decades to come.

Odile Hénault is a Montreal-based architectural critic and consultant.

Informa transforms with the unveiling of revitalized exhibition platforms