The new UBC Aquatic Centre is more than just a swimming pool: it’s a device for viewing the shifting architectural landscape at the University of British Columbia. Designed by MJMA with Acton Ostry Architects, it features a continuous ribbon of glass around the tessellated, all-white, sloped structure. Swimming in its 50-metre-long pool feels like being inside a giant oculus, where “see and be seen” takes on new meaning: you are not just an end-user but also an active participant in the broader visual environment.

Inside, that competition pool is delineated from the family and recreational areas by a giant, translucent Barrisol screen. As I paddle along its north-south axis, framed views of the surrounding built environment unfold before me. Historical context is writ large—from the still-hand- some midcentury War Memorial Gym to the south, to the mid-90s Student Recreation Centre to the north, with the edges of adjacent new student housing under construction and even an Edwardian mansion further on the horizon, peeking through the eastern skyline.

While the new 7,897-square-metre Aquatic Centre was designed to meet the needs of both UBC’s Olympian-level swim team and those of the burgeoning community of young families in the surrounding area, campus planners also envisioned it as a new anchor for the University Boulevard precinct, which is essentially the gateway to the campus.

“Pools and rinks don’t get as much attention as important civic spaces like concert houses or city halls,” says MJMA principal Ted Watson, “but they are very important community spaces.” It’s a program that’s becoming something of a specialty for MJMA: the firm helped transform Regent Park in Toronto with a new Aquatic Centre and is currently working on a pool in Longbridge Park, near the Pentagon in Washington, D.C.

UBC’s campus is a mish-mash of styles and era, with the 2010 cam- pus plan generating what Watson likens to a “giant chessboard” with moving pieces. The Aquatic Centre sits on the site that was once used as a field for sports and ceremonies. At its southwest corner is a giant hole—the site of the old 1978 aquatic centre that I knew and loved from my time here as a student in the 1980s—that will soon become a new recreational greenfield. Also surrounding it are the original and the new Student Union Building (SUB), one a bunker-like hangout that now provides student orientation and services, and the other—officially called the Nest—an outward-looking contemporary building. 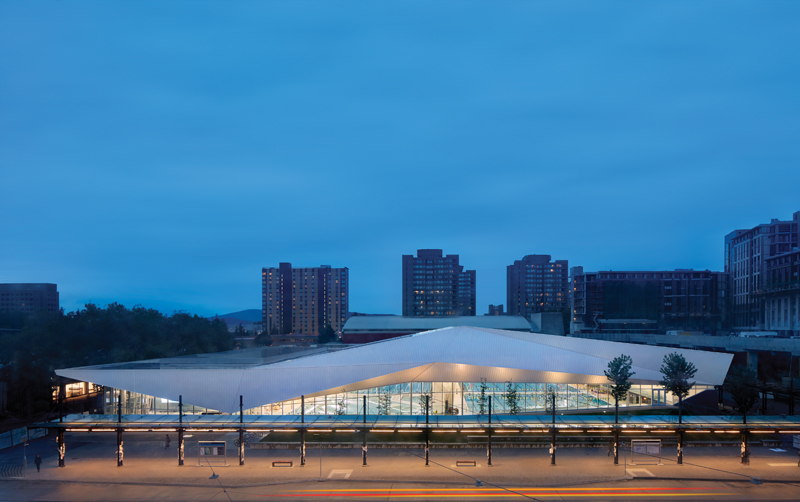 The element that promises to draw all these diverse buildings together is the enlightened landscape architecture done by MJMA’s in-house team in collaboration with PFS Studio. Their scheme features an “Athlete’s Way” pedestrian greenway between the old SUB and new Aquatic Centre planned to capitalize on existing old growth trees, and newly planted ones on the Aquatic Centre’s southern edge, mitigating the industrial feel of the new bus loop.

In such an architecturally busy environment, the elegant simplicity and restrained palette of the new Aquatic Centre makes sense. With the exception of speckled blue and occasional yellow interior elements referencing UBC colours, it is a mostly white, purist environment.

And just as its design speaks to the balance between public and private space, and between Olympian and community needs, so too does it play with the contrasting solidity and transparency of the surrounding environment. With the brutalist Buchanan Tower to the far northwest, the Brock Commons Tallwood House nearby and especially the adjacent Student Recreation Centre whose glazed north façade offers an un- expected viewing platform into the pool, there is a sense of dialogue rather than distance. This is a building that plays well with others.

Despite its neighbourly congeniality, the Aquatic Centre has a distinctive design that makes it a bright star in the current campus constellation. Its origami-like faceted standing-seam metal roof—designed for rain protection, solar shelter and the controlled admittance of day- light—generates the formal aspects of the design scheme. And yet the dramatically sloping shape is partly the result of financial constraints. “The triangular form of the building was inspired by the fact that we had no budget for a second floor or elevators,” says Watson. “So the internal topography and triangulated shape were part of our plan to make a reduced and simple building workable.”

The rooftop-façade is constructed of powder-coated metal, a humble material elevated to a higher use. “We started with a porcelain façade, which would have been really nice,” says Watson, “but through the value- engineering process, we ended up with the standing-seam metal, which is a more basic approach. By using the tessellated segments, with different orientations of the standing seam, we were capturing shadow and light at different times of day, which gives it a more interesting character.”

The result is a building largely defined by its sculptural roof—whose seams, to be sure, are noticeably not aligned. That was a conscious deci- sion, says Watson—in keeping with the project’s contrapuntal motif. “We felt that this dynamic kind of movement was pretty interesting, visually.” What’s more, to line up the seams would require a level of con- tractor-subcontractor coordination that would kick its budget off-kilter. “We wanted to make the clearest, most legible building possible,” adds MJMA partner and co-designer Viktors Jaunkalns with the goal of “removing as many barriers to participation, and getting as many people swimming and using the building as possible.”

Another distinctive element is the use of light. At the juncture delineating the family and recreational area to the west and the competition area to the east, a series of Y-shaped structural columns support a six- metre-wide skylight. The shifting sun casts patterns on the Barrisol screen, offering a textural element that helps mitigate any sense of sterility in the super white environment. The textile like feel of the material, as well as the humidity resistant large-scale tegular acoustic panelling system help to reduce noise and glare.

The entire building is effectively a tabula rasa, a screen reflecting the surrounding environment, and at night its interior illumination especially its suspended, indirect LED lighting—transforms it into an architectural lantern. Indeed, the Aquatic Centre is a suitable beacon for the re-invigorated University Boulevard precinct. But one hopes that the mildly antiseptic feel will be softened as burgeoning green space develops and landscape trees mature. Although the fabric-like Barrisol screen and acoustic paneling can lend a tent-like vibe to the space, at off-peak hours, when it’s relatively devoid of swimmers, its cavernous space evokes an aquatic airport. 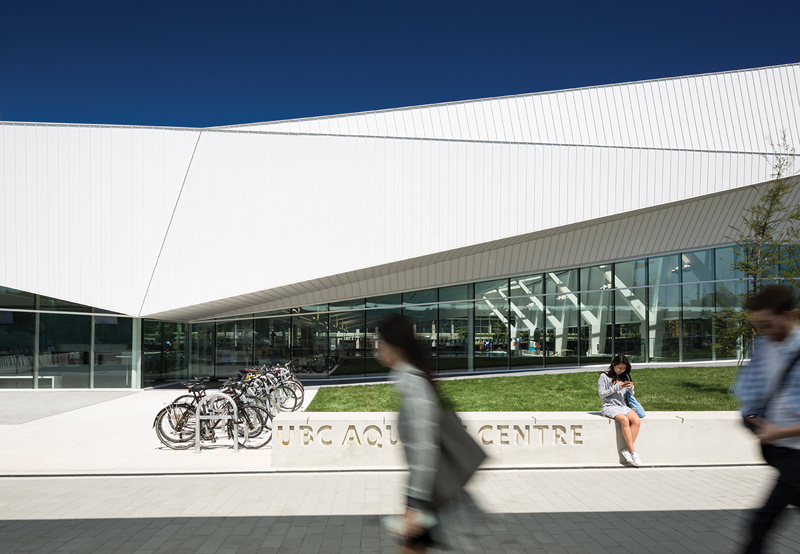 This approach to transitions extends to the mix of gender-specific and universal change rooms, which feature see-through glass walls with strategic mottled patterning. “We wanted to make the clearest, most legible building possible,” says MJMA partner and co-designer Viktors Jaunkalns with the goal of “removing as many barriers to participation, getting as many people swimming and using the building as possible.” It’s an approach that he says is about “cultural openness and democracy of space.”

There was something undeniably cozy about the old aquatic centre, whose brutalism was mitigated by strategic glazing and tropical indoor plantings that lent its interior an aura of sky-lit arboretum, and whose bleachers became a popular student napping spot called “the womb.” It’s hard to imagine that the sheer transparency and openness of the MJMA Aquatic Centre would encourage any napping. The ghost of the former aquatic centre still evokes nostalgia for its relative intimacy; this writer, for one, appreciated its snug sense of enclosure.

Still, the birth of this brave, new LEED-Gold aquatic centre is a happy one. And for those who might yearn for a semiotic of the original aquatic centre, the giant diving board from the late, great outdoor pool, completed in 1954 for the British Empire Games, will soon become an installation piece in the new Athlete’s Way greenspace.

What the new and more extroverted Aquatic Centre lacks in intimacy, it makes up for in outreach. “The more spaces are transparent, clear and open,” observes Jaunkalns, “the more inviting they are as public spaces.”

Hadani Ditmars is a Vancouver-based journalist, author and photographer.
Photos by Ema Peter, except as indicated