Now in its fourth iteration, a plan by architectsAlliance to expand Ottawa’s iconic Château Laurier  continues to meet a frosty reception. 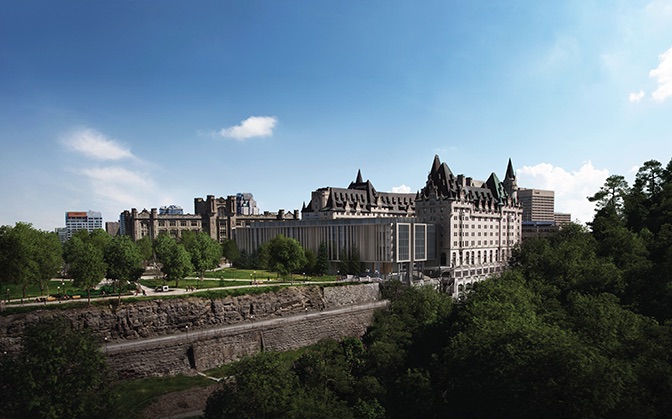 Designed in collaboration with heritage consultants ERA Architects for developers Larco Investments‚ the proposal envisions a modern addition to the 1912 building, with the latest iteration introducing limestone cladding to reference the materiality and texture of the Châteauesque hotel. 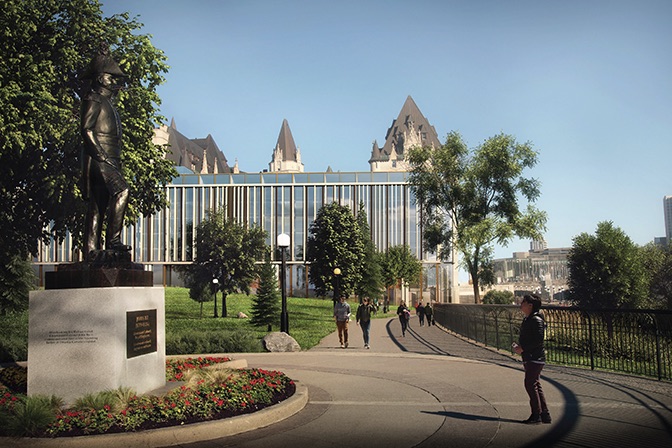 Heritage Ottawa was not impressed, warning that approval of the design would constitute “the most disgraceful act of heritage vandalism of our generation.” Read the full statement below:

Owners of the Château Laurier have unveiled their latest design for a proposed addition to the venerable historic hotel, a National Historic Site of Canada.

Heritage Ottawa remains unimpressed—and is gravely concerned that the City of Ottawa may be on track to approve what would be the most disgraceful act of heritage vandalism of our generation.

The revised design fails to resolve—or even address—the underlying flaw that impaired all of the previous attempts.  The angular, blocky massing and style of the proposed addition remains intrinsically incompatible with the romantic sensibility of the historic Château.

First and foremost, any addition must appreciate and respond constructively to the architectural sensibility of the original building.  In the case of the Château Laurier, that prevailing sensibility is ‘picturesque’; that is, the building conveys a sense of romance, mystery, excitement, unpredictability and splendour.  Architectural historian Peter Coffman has described it as “an invitation to dream.”

The proposed addition conveys no such qualities. It neither complements nor enhances its historic surroundings; it imposes upon them in harsh contrast.

The Château Laurier tells a “story”.  A skillfully considered addition could add to that story.  A poorly-conceived addition will only subtract from it.  There is an opportunity here to enhance the experience of the Château, but this design simply gets in the way.

It appears that public objections to the previously proposed designs have had some effect. The latest design differs from its predecessor in several ways, including some use of limestone on the exterior and an overall height reduction of one storey.

But the fundamentally flawed premise remains unchanged.  Although the design has evolved several times since its introduction nearly eighteen months ago, each evolution has found a different way to repeat the same mistake.  No amount of refinement of exterior design details can overcome this fundamental incompatibility.

The Standards and Guidelines for the Conservation of Historic Places in Canada states:

“Conserve the heritage value and character-defining elements when creating any new additions to an historic place or any related new construction.  Make the new work physically and visually compatible with, subordinate to and distinguishable from the historic place.”

Although undeniably distinguishable, the proposed addition is neither physically nor visually compatible with, nor subordinate to, the historic place on which it seeks to impose itself.

Contrary to popular belief, there are no regulations or bylaws that require additions to heritage buildings to be fundamentally incompatible with their historic partners.  The Ontario Ministry of Culture’s “Eight Guiding Principles” for heritage conservation states that “new work should be distinguishable from the old”.  Given repeated inclusion of the word “respect” in these guidelines, this should not be misinterpreted as a directive to build incompatible additions—something no heritage laws or guidelines in any region would espouse.

The Venice Charter, an international benchmark for the conservation and restoration of historic buildings, states “Additions cannot be allowed except in so far as they do not detract from the interesting parts of the building, its traditional setting, the balance of its composition and its relation with its surroundings.”

If allowed to proceed, the proposed design would violate the integrity of the historic Château Laurier, disregard its unique historical significance, and forever disfigure one of Canada’s most important heritage sites.

Any addition to the Château Laurier must also take into account the unique – and uniquely important – site.  The Château sits immediately across the Rideau Canal from Parliament Hill, at the gateway to a UNESCO World Heritage site.  The addition will be prominently visible from these and other sites of national importance including the heritage-designated Ottawa River and historic Major’s Hill Park.

By failing to address the Château’s picturesque character in any way, shape or form, all of the design options presented to date detract from the Château and its historic setting—and in doing so, undermine the integrity and value of the cultural landscapes that surround it.  There is arguably no other heritage site in this country – and certainly no other in Ottawa – that demands the same degree of vigilance as this one.

Public opposition remains considerable.  If an addition to the Château is to be built, nothing less than excellence is good enough.  Future generations—the current citizens of Ottawa—and indeed all Canadians, deserve no less.

The proposed Château Laurier addition will be the most important heritage application to be considered by this session of Ottawa City Council.

Heritage Ottawa calls upon our Mayor and Ottawa City Councillors to use their authority under the Ontario Heritage Act to prevent this inappropriate design from proceeding.

As a building designated under the Ontario Heritage Act, any addition to the Château Laurier requires the approval of Ottawa City Council before construction can proceed. The owner is required to submit a heritage application with the City of Ottawa. Next steps are anticipated as follows:

Heritage Ottawa will continue its advocacy efforts to protect the Château Laurier from inappropriate change.

You can find the original release via the Heritage Ottawa website, linked here