Red River College Polytechnic’s new teaching centre, Manitou a bi Bii daziigae, is the institution’s most recent of many contributions to Winnipeg’s rich, but beleaguered, downtown. Making significant strides in urban, cultural, sustainable and interior design, the building is also an illustration of how a client’s vision is as important as that of the architects. Maria Mendes, at the time Senior Project Manager at RRC Polytech, is an architect by training, and worked closely throughout the process with Diamond Schmitt and Number TEN Architectural Group. Together, their sensitivity to the priorities of good design became a key factor in the project’s success.

The building’s name was chosen by Paul Guimond and Una Swan, two of the College’s Indigenous Elders-in-residence. It is Anishinaabemowin (Ojibwe) for “Where Creator sits, brings light.” The sun shines on this building both metaphorically and literally. Depending on weather conditions, solar power contributes around 20 kWh/m2 in Energy Use Intensity (EUI) to the project’s target EUI of 100 kWh/m2 (LEED Gold certification is anticipated). The wall-integrated solar panels, supplemented by rooftop panels, make use of Kromatix photovoltaics, whose glass is coloured through atomic deposition. In this case, the colour varies from bronze to gold, depending on viewing angle and lighting conditions. The effect seems to reference the gleaming carapace of a turtle or dragon—figures resonating with Indigenous tradition as well as another cultural presence, the nearby Chinatown. This is the first time that façade-integrated panels have been used in a building of this type in Canada,
a move that results from a highly intentional design investigation. Truly integrated into the cladding, they serve as a rainscreen, and are wired to provide energy data to the building’s mechanical systems. As Diamond Schmitt partner Michael Leckman explains, only two edges of each rectangular panel are provided with a frame. This made the panels more fragile when being moved around on site, but gives the other two edges a sharp, blade-like, expression that allows each panel a defined presence as a component of the building’s “shell.” 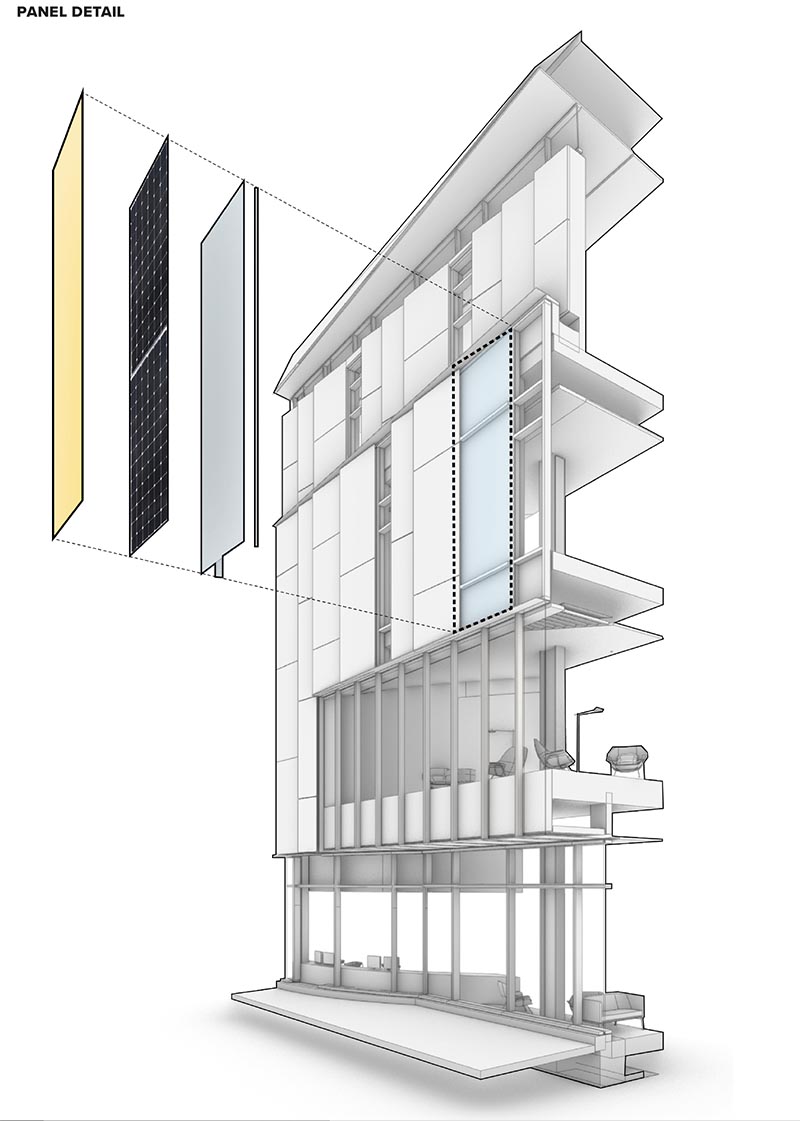 Conceived from the beginning as an innovation centre, the building houses many of the College’s technology-focused programs, from game design to applied computing. Teams of students are led through project work by local Entrepreneurs-in-Residence, many based in the nearby concentration of start-ups and makerspaces known as Innovation Alley. Programs are also informed by Indigenous pedagogy, encouraging purposeful thinking about people, processes, and places. To accommodate these creative industries and open-ended approaches, the architects drew on Diamond Schmitt’s deep experience with pedagogical spaces. The interiors deploy a gradient of space, from conventional lecture rooms to the highly social spaces of a central public atrium, known as the Agora. Between these are arrayed a range of front-porch-like areas intended to support informal meetings and chance encounters. Leckman refers to these as an “interior urbanism”—and they do read that way. Degrees of transparency, permeability, size and shape, seating possibilities, and markable surfaces foster interaction and discussion. Because of the pandemic, few students have yet been able to use the building, but technical jottings scrawled in dry-erase marker on the glazed classroom walls attest to their use as intended. This pedagogical graffiti recalls the scientific scribbles seen on the chalkboards of liminal meeting spaces in Kahn’s Salk Institute, similarly designed to provoke creative encounters.

The atrium itself is brightly lit by skylights above and street front glazing along its south edge. It is tied together at one corner by a cylindrical volume of stacked spaces, which serves as a kind of pivot, with circulation spaces slipping by tangentially. The circular spaces are Indigenous in inspiration. Accordingly, the largest one—the Roundhouse—is entered from due east, and the mechanical systems of both spaces support smudging. Acoustic baffling provides the Roundhouse with a beautiful wood edge, and its walls can be opened up entirely to the Agora for public events. The architects worked with Indigenous Elders on the design of an art piece integrated into the flooring of the ground floor multi-purpose room, while Anishinaabe/Inninew/British artist KC Adams designed another for the Roundhouse on the second floor. Maria Mendes explains KC Adam’s piece with passion and attention to the minutiae of the design. The terrazzo is inlaid with copper patterns—integrated circuits, Inuit tattoos, a Métis sash, and bitten birch bark—that are folded together into a Morningstar, a motif from Dakota, Nakota, and Lakota cultures. 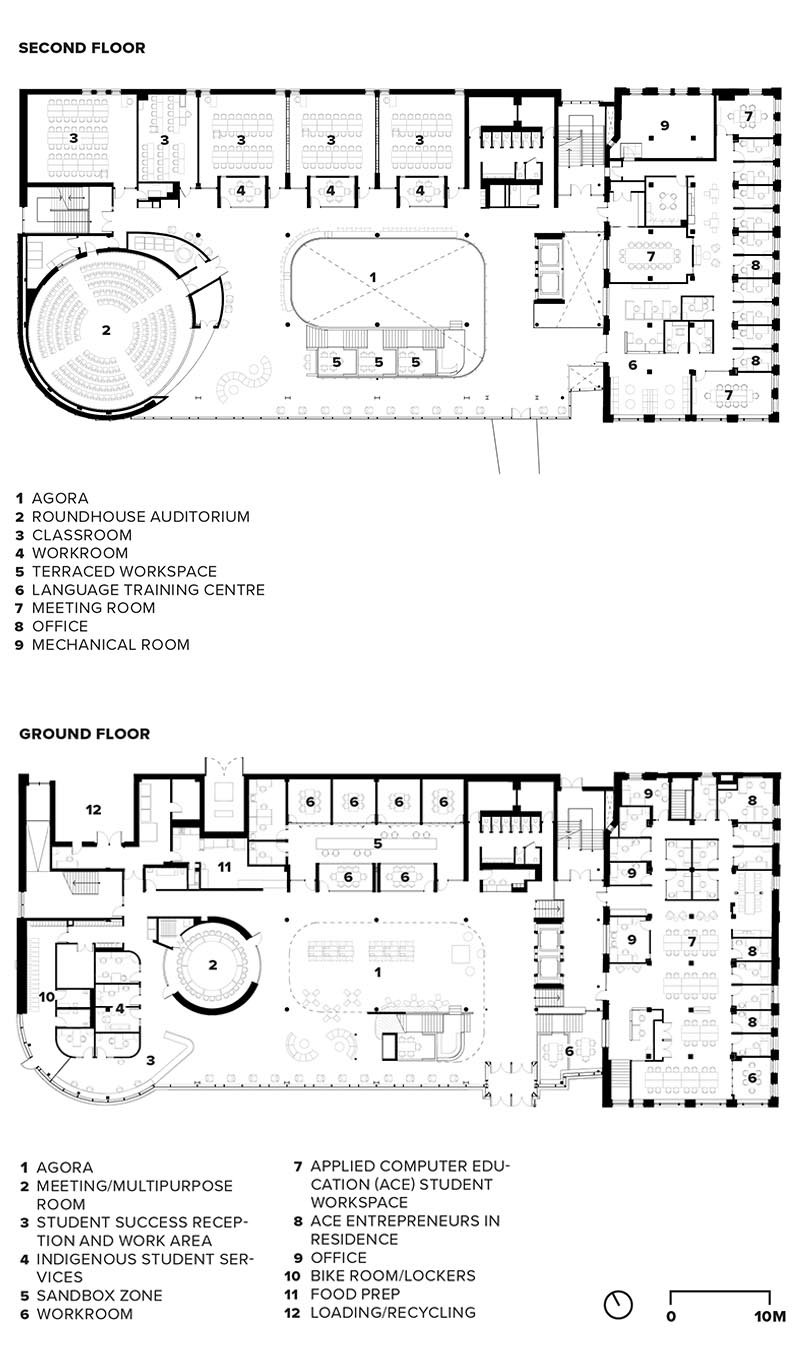 The building also engages a more recent tradition: the warehouses of Winnipeg’s Exchange District. About a quarter of its floor area comprises the repurposed Scott Fruit Building. As Doug Hanna, Partner at Number TEN explains, the building dates from 1914, when concrete was replacing timber in warehouse structures, and it is one of Canada’s earliest reinforced concrete warehouses. New mechanical services were relegated to subfloor plenums, leaving the ceilings clear and exposing the character-defining mushroom capitals. Original windows were preserved, their assemblies insulated with new glazing. And the marks and scars of aging masonry were exposed and accentuated. Accommodating older floor levels (including a deep basement) was challenging, but the design team integrated the elevation differences into the vertical ascent of the atrium. These efforts won the project a 2022 Heritage Winnipeg Preservation Award.

The building’s presence on the street is as striking as its interiors. The urban design turns on three main gestures. One is the integration of part of Elgin Avenue as a pedestrian space between the original Princess Street campus and the new building, which expands the campus to the north. The design team, in particular HTFC Planning & Design, fought hard to convince Winnipeg authorities to close this section of street. Their efforts have been rewarded with an at-grade pedestrian connection that sews together the campus, and brings pedestrians and cyclists into an interstitial zone animated by curving benches, games spaces, and new paving and lighting.

The second gesture is a second-storey bridge, similarly linking old and new. While in Winnipeg as elsewhere there is a perennial debate about the impact of such connections on activity at-grade, in this case, the skywalk supports rather than detracts from life at street level. It shelters pedestrians as they walk between buildings; moreover, framing the street from above and along one edge, it helps define the pedestrianized street as an urban room.

That effect is reinforced by a third gesture: a deep and colourful cornice projecting over the street. Its underside is adorned with a painting by Jackie Traverse of Manitoba’s Lake St. Martin First Nation. The painting flows seamlessly from the ceiling of the City Room—the apex of one’s ascent through the interior Agora—to the eaves high above the building’s entrance. Effectively, it caps both the building’s interior and urban spaces. Its greens, golds and reds speak of the sun, and richly complement the bronze and gold of the photovoltaic cladding. As Leckman points out, its sharp projection over the street intentionally recalls the deep cornices characteristic of the Exchange District’s heritage banks and warehouses, which cut sharp angles against the Prairie sky.

One of the most prominent of those projections is the two-metre cornice of another recently completed RRC Polytech property—the Paterson GlobalFoods Institute, a 2013 adaptive reuse by Prairie Architects of the Union Bank Tower. Other planned developments may also help in the gradual healing of Winnipeg’s fractured inner city. Hollowed out by postwar suburban flight, the downtown has been much more recently hard-hit by a pandemic-related exodus of workers, as well as an exacerbation of social inequities particularly impacting urban Indigenous communities. In her current position as Director of Environmental Stewardship and Campus Renewal, Mendes is acutely aware that the College’s campus projects must connect up with other city-healing projects in the area. The newly pedestrianized Elgin Avenue, for example, leads directly east to City Hall on Main Street, via the Market Lands—the site of an international design competition four years ago (see CA, Feb 2019). Construction is set to begin soon there on an arts hub and affordable housing designed by winning firm Daoust Lestage Lizotte Stecker, with market-rate housing expected to follow.

Manitou a bi Bii daziigae will be another of RRC Polytech’s contributions to the ongoing recovery of Winnipeg’s downtown. The building manages to operate at several levels simultaneously: working between technological and cultural space, and between interior and urban design. As students and others occupy its innovative spaces, we can hope its light will shine over a revitalized public realm.