In 2013, I joined experimental social psychologist Dr. Celeste Alvaro to conduct a post-occupancy study of Bridgepoint Active Healthcare, a complex care hospital in Toronto. This study, the largest of its kind in Canada, was uniquely positioned to look at the psychosocial impacts of design on staff and patients in chronic care and rehabilitation, as Bridgepoint relocated from its old building to a new state-of-the-art facility on an adjacent site.

While most evidence-based design research has focused on readily quantifiable impacts, such as optimized workflows, this study sought to investigate some of the harder-to-measure qualitative aspects of design. We were interested in the effects of design on the psychological well-being of patients—depression, connectedness, mood, stress reduction—as well as looking at health impacts such as pain and mobility.

The hospital’s architects—Stantec Architecture / KPMB Architects (Planning, Design and Compliance Architects) and HDR Architecture / Diamond Schmitt Architects (Design, Build, Finance and Maintain Architects)—aspired to make the 464-bed facility into a new paradigm in patient-centered care for chronic disease and rehabilitation in Canada. The country’s aging population is projected to be living longer with complex and multiple chronic diseases, which means longer-term or recurring relationships with treatment environments. To address this new reality, healthcare facilities will be transitioning from the current model of predominantly acute care (where visits are short and infrequent) to a new model of ongoing care. The social, sensorial and affective qualities of spaces are far more important in this latter type of care—which comes with a captive and aware patient population, prone to depression and boredom.

The architects’ stated design objectives were used as the focus for the study. These included normalizing and humanizing the hospital environment, connecting it into the local community and Riverdale Park, maximizing daylight and views, and using multiple ancillary spaces as destinations to encourage mobility and social interaction. During preliminary design, the project was presented as a “village of care” , featuring “urban porches” and “sky gardens” that would enhance the quality of life for patients by offering an augmented program of amenity spaces.

The hospital was significantly enlarged from the earlier facility because of a transition from quad and triple rooms to private and semi-private rooms, as well as the addition of physiotherapy spaces, resource rooms, dining spaces, lounges, gardens and retail—all linked through internal “streets” that visually connect to the local context. The study analyzed the character, configuration and impact of these connective and social spaces, as well as evaluating the improved hospital rooms. 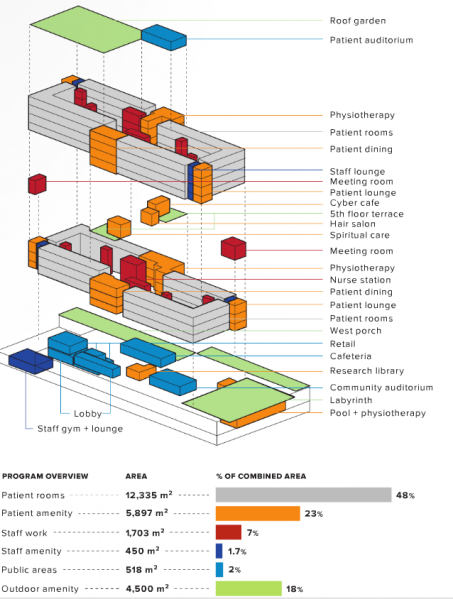 While it was expected that these innovations would all be positively received, one of the concerns with the bigger building (now on a greater number of larger floor plates) was that it would create too low a density of occupants per floor—actually diminishing social interaction and mobility rather than enhancing it. There was also concern that the improved quality and privacy of the individual rooms might make patients reclusive, and that the greater quantity, variety and dispersion of social spaces would diminish the intensity experienced in the previous building’s centralized lounges.

Our interdisciplinary research team, led by Dr. Alvaro, collected responses from patients and staff both before and after the move to the new Bridgepoint. They used a variety of systemic and unobtrusive methods to gather spontaneous, unsolicited impressions related to comfort, wellness, connectedness and social interaction. Our architectural team, which I led, looked at these reported differences in use and at the perception of space in each building, and cross-referenced this information with comparative architectural data. We considered the densities of patients and staff per floor, quantity and variety of amenity spaces competing for patient use, travel distance to social spaces and elevators, visual interest and porosity of interrelated areas, presence of daylight, and other circulation conditions that could facilitate casual social interface and interaction.

Compared to the former building, the new hospital is twice as large in floor area, offers quadruple the volume of space, and has almost five times the ratio of amenity-to-bed space. The change to private and semi-private rooms and bathrooms—an upgrade that meets con-temporary hospital best practice and accessibility codes, conventions and systems—drove much of this area and volume increase. The increase in amenity space, for its part, was not simply program driven, but came out of the selected plan parti. Site constraints dictated an eleven-storey building while maintaining a relatively compact footprint. Multiple floors were each given their own “neighbourhood” lounge spaces for a much smaller population of patients per floor than the former building. The pinwheel floor plan, organized to provide destinations and views at the end of each corridor, generated a proliferation of common spaces.

As anticipated, we found that these patient floor amenity and lounge spaces were rarely used, despite their abundant daylight and attractive distant views. Instead, patients typically travelled multiple floor levels to gather at a few central building destinations. The most popular areas were the rooftop terrace—an outdoor space with activity, community and spectacular views to the lake and the city—and the ground floor lobby and cafeteria, where patients were more apt to encounter larger groups and could observe the comings and goings of staff and visitors. On average, there was a 23.4 per cent increase in patient motivation to “get out and move around” in the new building versus the old—a key objective for chronic care patients prone to inactivity.

As William Whyte observed in his famous study of public spaces, “what attracts people most, it would appear, is other people.”

More important than the quantity and variety of amenity spaces were the qualities of the internal circulation paths to get to them. On patient floors, circulation was designed to ensure a high level of daylight, as well as syncopated and varied views to the adjacent parks, urban skyline and surrounding neighbourhood, encouraging a sense of orientation. Documented impressions showed that patients enjoyed a greater sense of connectedness to the outside world and interest in moving around the building.

In general, the collected data showed a consistently improved overall reaction to the new building. The average response was 13 per cent more positive compared to the old facility. Patients also perceived their own health as ameliorated, with mental health improvements an average of 6 per cent higher pre- versus post-occupancy. They are also healing significantly more quickly—according to hospital President and CEO Marion Walsh, patient stays are 25 per cent shorter in the new facility.

Every building is a unique entity, the product of a complex construct of variables. Analytical templates and techniques for eliciting and gauging patient response have the potential for broader adoption—providing a standard for collecting, unbundling, and analyzing the large-order architectural components and conditions that distinguish projects, and understanding their impacts on human feelings and behaviours.

As Canada grapples with a growing need for chronic care and rehab facilities, evidence on the impact of design on psycho-social health will be an extremely valuable tool, eventually leading to new mandated standards and guidelines. Properly implemented, evidence-based guidelines will have the potential to reduce stress and depression, while improving patient outlook, social interaction, and self-efficacy in mobility. These are measurable outcomes that can help reduce patient stays and related healthcare delivery costs. Recent measurement standards for commercial and institutional buildings, like the WELL Building Standard, further attest to the importance of qualitative design. There is a business case for improving the character, beauty and experiential quality of our built environment.

This research was funded by a Canadian Institutes of Health Research (CIHR) Partnerships for Health System Improvement (PHSI) grant awarded to Dr. Celeste Alvaro and team via the Strategy for Patient-Oriented Research and the Rx&D Health Research Foundation Fostering Innovation in Healthcare Initiative with partnered funding from the Health Capital Investment Branch of the Ontario Ministry of Health and Long Term Care.

The full research report, including an overview of the research development and the team, can be found at: www.issuu.com/architectureandhealthresearch.