A modest addition to a Winnipeg library engages a difficult urban condition, with a high-end neighbourhood to one side and unhoused people on the other.

For Public City Architecture, all projects begin with the urban condition. In their renovation of Winnipeg’s Cornish Public Library, the firm had to negotiate a particularly tricky situation. The library sits on the edge of a privileged neighbourhood—Armstrong’s Point—whose residents are highly aware of the heritage value of “their” library, and resistant to changes to its front entrance. Behind the library, people sleep rough under the Maryland Bridge on the Assiniboine River. A daily flood of commuters cross the same bridge, with a view only of the library’s rear elevation, not of its front.

The firm has solved accessibility issues (the original remit of the project) through a subtle front ramp and deftly integrated elevator and universal washroom; they also restored heritage woodwork. But the project’s most clever gesture is completely new: the addition of a reading room which appears, at first, to be a simple glass prism. Closer examination reveals a clever reconciliation of the contradictory geometries of
existing building and adjacent road. The solution also goes some ways towards reconciling more difficult aspects of the city. 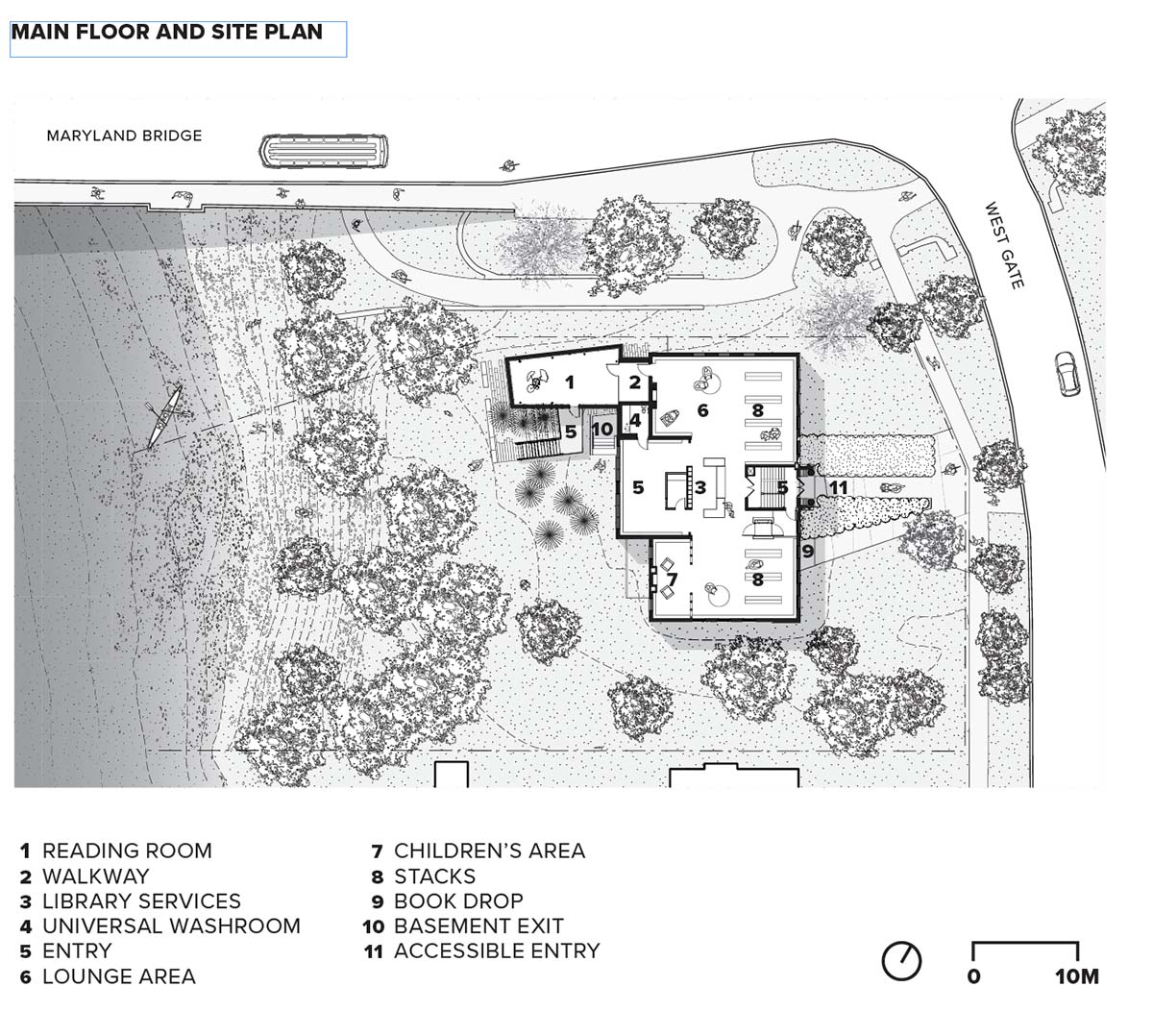 Public City has oriented two of the room’s glass walls to the road and bridge, where they draw the eye of commuters passing through this urban gateway. But more importantly, and subtly, those walls reshape the library’s relationship to a contentious public space: the space under the bridge, where people, tents and collections of personal belongings accumulate in warmer months. A fence used to separate the public space under the bridge from the garden at the rear of the library, keeping itinerants out of the latter. At the designers’ urging, that fence is gone. In its place, Public City placed their reading room, dramatically raised up on a single concrete column. The eye flows under the glass volume, across a landscape striated by limestone slabs, some of which serve as benches. An outdoor faucet, too, is a simple gesture of welcome, providing a source of clean water for drinking, cooking, and washing up.

The eye also slips easily from inside to out. A glazed curtain wall opens the interior to garden, river, and bridge. Privacy is modulated by the slight smoking of the lower edge of the glass. Floor and ceiling are clad with identical wood flooring—emphasizing them as planes. To similar effect, columns are articulated at base and cap, where the circular sections become cruciform (a nod to Mies).

Inside the reading room, the skew of walls forces perspective, creating a space which, while small, has great presence. Its focal point is the kinetic sculpture Four Flowers by Michael Dumontier, one of the founding members of Winnipeg’s The Royal Art Lodge, a collaborative which helped put Winnipeg’s contemporary art scene on the map. Dumontier builds on the motif of the supportive column, adding his own column bedecked with a cluster of petals afloat in the circulating air. The artwork was intended to have a presence both within and beneath the reading room–and sure enough, at the base of the concrete column lies the rusted disk of a lonesome petal.

This library was originally funded by Andrew Carnegie, at a time of great socioeconomic disparities. For some, our time has started to resemble his. Despite the contradiction with his own treatment of labourers, Carnegie’s libraries were attempts to mitigate those inequities: open to the general public, even children, at no cost. Public City’s renovation is a fitting complement to that ethos. It engages heritage and art, and quietly accommodates function—all while presenting a bold face to the city and bravely engaging a difficult urban condition.