A block west of Olympic Stadium in Montreal, the Guido-Nincheri Park reclaims that small corner of the urban realm from the automobile, creating a new pedestrian realm while resolving the intersection through a simplified road geometry. Civiliti, a Montreal-based landscape architecture firm, designed the new park at the corner of Sherbrooke and Pie-IX Boulevard, hitherto an awkward intersection of two major streets and the smaller Rue Rachel. Despite being in the shadow of an iconic Olympic landmark, the busy and dangerous intersection conveyed hostility rather than welcome to pedestrians. No longer.

The playfully kinetic coloured walkways energize the small space, making it an effective symbolic gateway to the grander attractions of Parc Maisonneuve to the northeast. A warm lighting program by UDO Design contours the linear park, adding a welcoming sense of texture that enhances the spatial quality. The park’s meandering, striated surfaces present an abstracted woodgrain pattern, in homage to the trees that once covered the site. Framing the two-tone, gently sloped path are sculpted walls and circular planters, evoking the knots of a tree and providing extensive public seating. With the lights, it’s a welcoming space to linger on a summer evening. 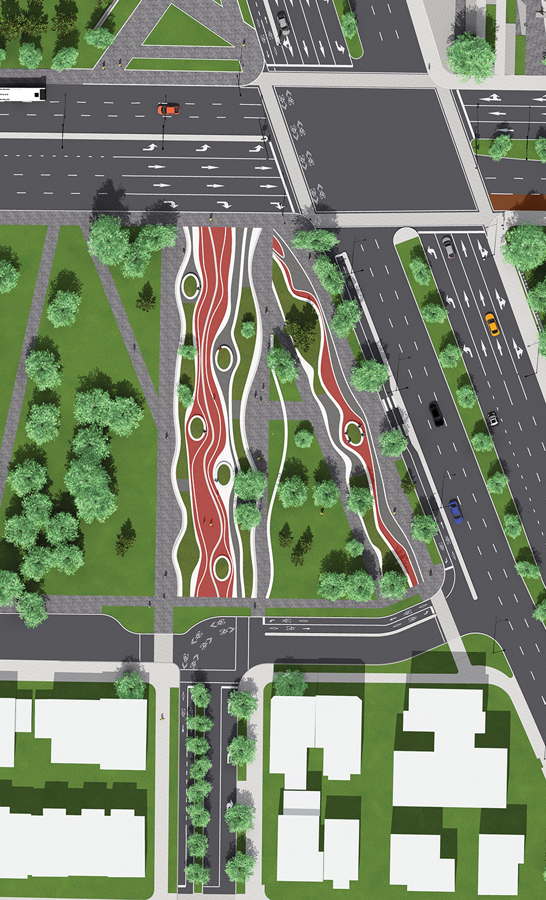 The park’s introduction last August was folded into Montreal’s 375th anniversary celebrations. But unlike those effusive celebrations, Guido-Nincheri Park is neither grand nor declarative, and it needn’t be. The park is a thoughtfully conceived space, with well-integrated design  elements that are elegantly complementary of one another. A healthier urban fabric now surrounds one of the city’s most iconic landmarks  of the 1970s. And it feels distinctively like Montreal.