GROW, a striking 20-unit rental apartment development by Calgary-based Modern Office of Design + Architecture, brings new and much-needed promise to the largely uninspired world of mid-scale multifamily housing in Canada. In a sector preoccupied with margin and brand, GROW placed its bet on a different set of ideals, centered on community and gardens—and its wager has paid off. The project has achieved a diverse unit mix, community space, food production, and innovative urban form, at a competitive cost of $230 per square foot. On one hand, this makes the project a modest and successful 20-unit experiment: GROW eschews the normative template, but still converses in the economics of residential construction. On the other hand, it makes the project a much more substantive provocation, raising the question: why does so much multifamily design promise so little?

The project is located on an unassuming interior street in Bankview, a neighbourhood just southwest of Calgary’s urban core. Throughout the past seven decades, Bankview has been subjected to scattered episodes of redevelopment and intensification. On every block, heritage houses intermingle with infill duplexes, walk-up townhomes, modern rowhouses, and mid-rise apartments. The neighbourhood’s complex terrain and staggered street grid further reinforce this medley of form and style. In a sense, Bankview can be read like a catalogue containing hundreds of historic visions for Calgary’s “missing middle.” GROW is that catalogue’s latest and most compelling entry.

GROW presents itself boldly to the street, as a composition of three masses that step back to create a terrace that climbs across the façade. The masses are clad in a restrained palette of wood and black metal, punctuated by infrequent openings and small balcony voids. This formal strategy lends the building a substantive presence despite its step-backs—GROW is sensitive, but not shy.

The main entry is set deep into the first mass, creating a satisfying forecourt. The same gesture draws the garage entrance far off from the street. Inside, the circulation is simple and purposefully composed. The ramping form produces a series of units that gradually increase in size, from a studio apartment up to a three-bedroom loft. The lowest row of units fronts onto the road, creating individual entrances that pick up the rhythm of the street. The second row of units back onto small, protected patios over the garage. The rest of the units look out over the multi-level roof terrace.

The project’s interiors—which are all unique—are thoughtfully resolved. A spare palette of wood floors and sharp white walls allows a sense of mass and space to emerge—an effect that is particularly successful in the lofts. There is no trace of the superficial fanciness and muddled edges that plague typical multifamily offerings. Again, GROW makes different promises.

The outdoor terrace is accessed from the second-floor interior corridor, making the roof a semi-private space for residents and guests. The terrace presents a journey that leads upward along the façade, through an extensive rooftop growing space to a deck at the top of the building. A handful of units look out over the terrace, creating a sense of intimacy and connection. The terrace is, at once, resident amenity, social node, habitat, and leasable property. The garden beds, which contain over 1,800 cubic feet of soil, are leased to a local Community Supported Agriculture (CSA) cooperative called YYC Growers, which includes a network of local farms. In exchange for the growing space and some minor supporting maintenance from the residents, YYC Growers provides each building resident with a weekly Harvest Box. This model has already shown great value for both the residents and the producer. For GROW, it connects the architecture directly to broader conversations about food security, local economy, and community health.

GROW wasn’t always destined for these big conversations. In 2015, Modern Office’s founding partners Dustin Couzens and Ben Klumper were asked to review a design for a more conventional building on the site. They pitched a series of optimizations that made more effective use of the slope, discarding an expensive underground parkade in favour of a parking garage tucked against the hillside. This gesture cascaded through the building form, shifting units and creating the form’s distinct terracing effect.

As the design advanced, Modern Office sought out further opportunities to leverage the project in pursuit of meaningful residential innovations. “Housing is a banal and problematic typology in architecture,” says Couzens. “Because it is encumbered by return, it is creatively bankrupt. Part of Modern Office’s mission is to reinvest in those ideas.” GROW is the firm’s first major residential project that tests—and proves—that a reinvestment in the promise of multifamily housing can yield a host of meaningful returns, both to the developer and the community. In a city that had a rental vacancy rate of 6.6% in 2020, GROW has an astonishing waiting list three times its capacity.

According to Couzens, GROW is a direct response to the challenge of the “missing middle,” which has become a common thread in the debate about affordability, housing policy, and urban growth in cities across Canada. The “middle” typically describes a wide range of housing types: denser than single family houses, but less dense than high-rise towers. Proponents of the “middle” typically point to these housing types as solutions that will produce more affordable and sustainable neighbourhoods through densification. Couzens outlines the challenge: “The missing middle needs a value proposition. It is difficult to build in a way that lives up to its promise of affordability. We need to ask more compelling questions about mixed use, and bring innovation to our underused spaces and underused surfaces.”

While Calgary’s overall housing stock remains dominated by single-family housing, the last twenty years have shown a steady surge toward the middle. In 2000, non-high-rise multifamily units comprised less than 5% of all units constructed. Last year, that share had grown to over 56%. 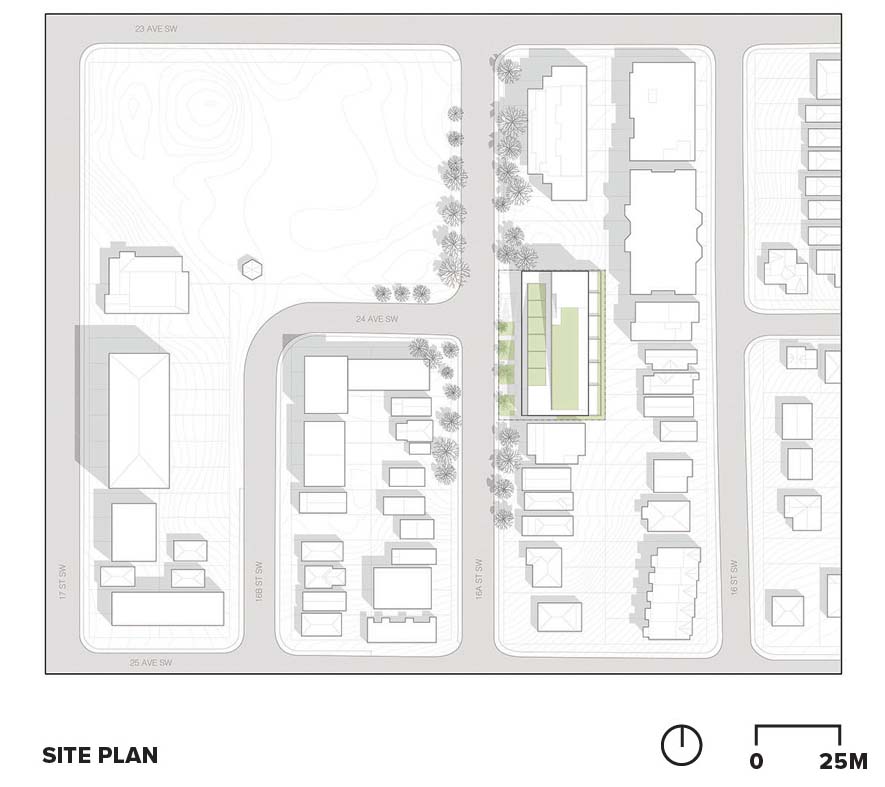 Clearly, development has responded to the opportunity of the middle, and it may not be “missing” for much longer. But this hardly closes the debate. GROW prompts us to ask more nuanced questions, not just about the quantity of middle, but about how it can encourage difference and connection, and how it can create appealing places tailored to the opportunities of each site. How can multifamily development produce fertile ground—both literally and metaphorically—in the city?

For Couzens and Klumper, GROW is just the beginning. “GROW proves that the reinvestment in these ideas works, but it’s limited here to twenty units. The task now is to scale the concept.”

Matt Knapik studied architecture and urban design at the School of Architecture, Planning and Landscape at the University of Calgary, where he has taught as a sessional instructor since 2011. He is an associate at Calgary-based O2 Planning & Design.