In the early 2000s, the City of Trois-Rivières began work on a major revitilization project for a site on the shores of the St. Lawrence River. Formerly industrial land, the parcel was a prime location adjacent to the harbourfront park, city centre, St. Lawrence River and St. Quentin Island. The municipality envisaged a majestic, harmonious and vibrant amphitheatre, and chose to hold an open architectural competition with the aim of obtaining a world-class building.

In 2011, Paul Laurendeau Architect won the competition in a joint venture with Trois-Rivières-based Beauchesne Architecture Design. The Amphithéâtre Cogeco, which opened with a Cirque du Soleil performance on July 15, 2015, garnered media acclaim for its spectacular architecture.

The qualities highlighted by the competition jury are undeniable. The project boasts an elegant and imposing structure, and provides ample views of the St. Maurice and St. Lawrence rivers. It is a model of sound planning, which includes enhancement of the site and public river areas. Its interiors benefit from natural lighting and the clarity and simplicity of the spatial organization. Conceptual integrity was maintained throughout the project’s development.

From an urban perspective, the building is situated at the tip of the site, bordering on the St. Maurice River. Its silhouette is reflected in the water at night, similar to the Sydney Opera House, which was cited as a reference for the city. The waterfront location also frees up the central portion of the development area, providing wonderful views of the river from Avenue des Draveurs, a new urban artery in Trois-Rivières-sur-Saint-Laurent.

Symmetric and open like a welcome pavilion, the four sides of the structure dialogue with its setting: to the west, the historic downtown core of Old Trois-Rivières; to the north, the new Technoparc and the main access road; to the west, St. Quentin Island and its beach; and to the south, the St. Lawrence Seaway.

The massive horizontal roof, which measures 80 by 90 metres, forms a distinctive architectural element—one that stands out from the landscape. Covered in red perforated metal soffits, its underside is supported by eight metallic-painted columns, each 85 centimetres in diameter. Scale-like aluminum panels, in three shades of red, clad the central concrete fly tower. Like a curtain, it transforms the building’s rear façade into a dramatic entrance.

The bright colours have a theatrical feel, reinforcing the building’s function. Lighting at the base of the columns creates sparkling contrasts on the underside of the roof, showcasing the form of this new landmark for Trois-Rivières.

:: Jury :: The amphitheatre has become an icon in the transformation of the riverfront precinct in Trois-Rivières, providing a new identity for the city. Using the simplest of geometries and the lightest of touches, the architects have created a memorable place for performances. The jury admires the precision of its distinct floating roof. Night lighting and the use of bright colour make the building a beacon for spectacles and performances at the water’s edge. 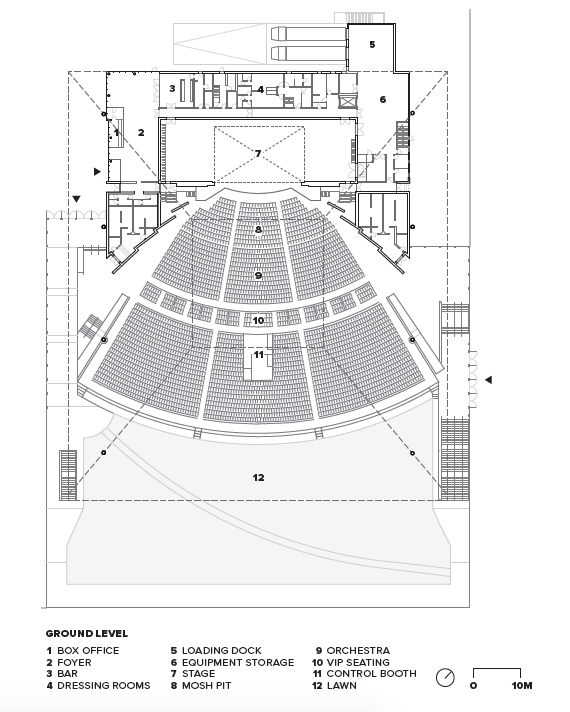 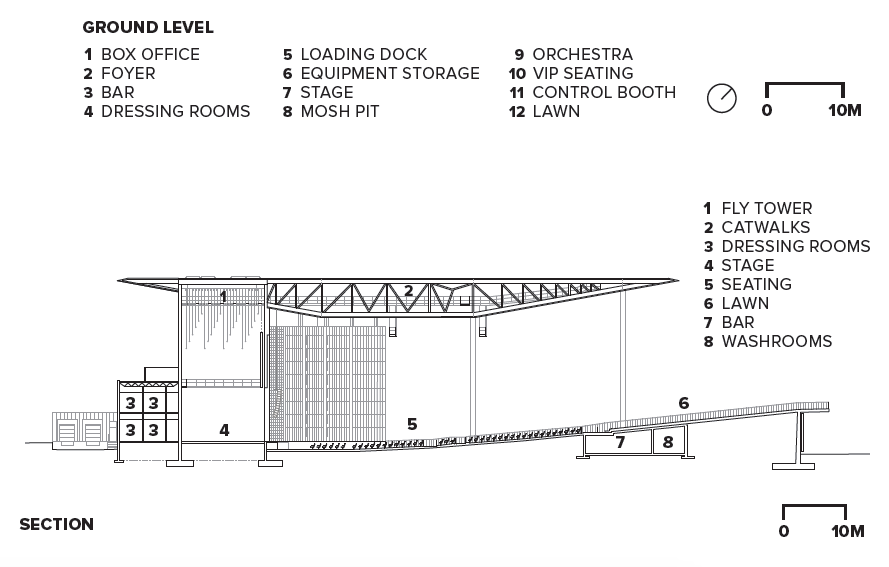