In the Public Interest: Governor General’s Medals in Architecture 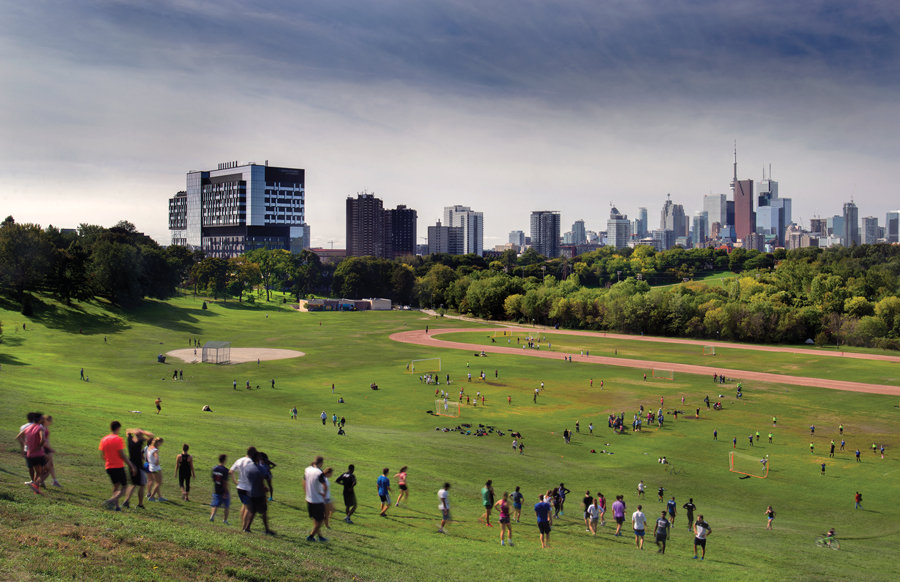 The Governor General’s Medals remain at the pinnacle of the many honours and awards that recognize architecture in Canada. Every two years, they showcase exceptional work by Canadian architects, as chosen by a peer jury. Each cycle covers a relatively long time span—buildings up to seven years old can be entered—meaning that projects can shine at their best, after final adjustments have been made and landscaping has grown in.

This year’s winning projects are remarkable in many ways, not least among which is the stellar showing made by public projects. For the first time since 1982, when the medals were established, the winners are entirely institutional, government and commercial projects—not a single private residence is among them.

Tenaciousness is often requisite for architecture, but this is especially the case in the face of the tight timelines and budgets of public projects. Bridgepoint Active Healthcare—the first P3 project to garner a Governor General’s Medal—and the Cogeco Amphitheatre are particularly noteworthy for achieving design excellence amidst more than the usual pressures of complex contracts and value engineering.

Other projects turned the caprices of public regulations and funding to their advantage. The Wong Dai Sin Temple’s signature cantilever was conceived to fulfill a municipal requirement for a large amount of parking on the compact suburban site. On the University of Manitoba’s campus, ARTlab was a project nimbly mustered from a related commission, to take advantage of a stimulus funding opportunity.

Several winning projects are notable for the tight partnership they show between architecture and engineering. Engineers were key members of the team that created Glacier Skywalk, a daring structure that leaps from a cliff in the Canadian Rockies. Technical excellence in working with wood is evident in the Wood Innovation & Design Centre, Ronald McDonald House BC & Yukon, and the BC Passive House Factory. That all three projects are in British Columbia attests to the continued advancement of expertise in working with wood (and particularly with engineered mass timber) in this province.

Other projects show a subtle flair for typological innovation. The Regent Park Aquatic Centre, for instance, includes universal change rooms—a first in Canada—that allow an exceptional quantity of daylight to flow through the entire one-storey structure. The Lévis headquarters of Caisse Desjardins layers circulation and collaborative spaces along a glazed façade, a strategy that distinguishes it from typical office buildings.

Of course, users are the final arbiters of a building’s success. Nathan Phillips Square and Halifax Central Library perhaps share the crown by this measure. I was part of the tens of thousands who flocked to Nathan Phillips Square during the Pan/ParaPan American Games last summer; the newly renovated plaza handled the crowds with adeptness and grace. And on the east coast, Haligonians are thrilled with their new library. In its first year, it had two million visitors—more than five times the city’s population. In these cases, the Governor General’s Medals merely confirm what the public has long known—that quality architecture makes life richer and more pleasurable for all.