It’s 8:30 in the morning on Tuesday, November 30, and outside the Clayton Community Centre in Surrey, BC, the third atmospheric river in a week is transitioning from routine downpour to certified deluge. This one won’t produce the record-setting precipitation of the first two—but that’s not much of a consolation, because the camel’s back has already been broken. Just 40 kilometres east of here, in Abbotsford, hundreds of homes and farms lie deep underwater, and thousands of animals have drowned.

In days to come, there will be debates over how much of the rain was due to climate change, and how much to mere weather, but one thing will remain indisputable: the flooding wouldn’t have been so extreme or impactful if humans hadn’t altered the environment in such an ill-considered way. Which helps explain this visit to the Clayton Community Centre. As the first community centre in Canada and largest non-residential building in North America to receive Passive House certification, it was expressly intended to both slow the progression of climate change and perform in a climate-changed world.

It’s also designed to be radically inclusive. Melissa Higgs, a principal at Vancouver-based hcma and the lead architect for the centre, is sitting at a table in the vast central “commons”—a type of space which is out of the norm within the familiar community centre genre. Nearby is a reception desk that serves everyone who enters the 7,060-square-metre building, whether intending to use the library, the gyms, the arrays of exercise equipment, the meeting rooms, the performing or visual arts facilities, the community kitchen, the community workshop, or to simply sit in the commons doing nothing in particular. “From a social justice perspective, it’s perfectly legitimate to just come in,” says Higgs.

When hcma won the commission to build the centre in 2014, Passive House was not part of the picture. At the time, the movement was restricted almost exclusively to northern Europe, even if its proponents happened to trace many of their ideas back to the Saskatchewan Conservation House, an airtight and super-insulated home built in Regina in 1976 by a team including architect Hendrik Grolle. But sustainability was very much part of the agenda: Clayton was the first project to employ a program developed by hcma to ensure that environmental and social factors are fundamental to everything the firm produces. The building was envisioned to not only achieve high environmental standards, but first and foremost, to meet the community’s needs and aspirations.

Geographically, East Clayton is the precise definition of an exurb, situated near Surrey’s eastern border, some 50 kilometres from downtown Vancouver. Typologically, though, it is not the expected sprawl of houses and lawns. Beginning in the 1990s, the community was developed using the principles of New Urbanism, which seeks to create walkable, sociable neighbourhoods somewhat in the mode of old-time small towns. Successful in its intentions or not, with its dense array of relatively inexpensive townhomes, East Clayton was definitely a hit in the marketplace. It quickly became one of the fastest-growing neighbourhoods in Canada, and one of the most diverse.

Those characteristics had implications for the community centre, as hcma discovered during its consultation phase. The area’s schools were overcrowded, and it was underserved by parks and gathering places. Residents couldn’t fall back on the typical suburban abundance of personal space. Both designers and locals were adamant about preserving the remnant forest on the community centre’s site, and eager to accrue a place where families and groups could get together. That helped settle the question of where the centre would be sited—on an unforested corner of the plot—and ensured that a gleaming, industrial-scale kitchen, opening onto a patio, would become a central feature.

In addition to the community consultations, hcma’s early focus was on knitting together the deeply siloed civic departments that would have to apportion and then operate the building in some kind of harmony. This process was well underway when Higgs received a phone call from Surrey’s manager of civic facilities, Scott Groves. He was disappointed with the results the City had seen from previous attempts to reduce energy consumption using programs like LEED, and had a question for Higgs. Might it be possible to steer the project toward Passive House? “I remember thinking, this is kind of the best call of my entire life—and kind of the most terrifying one,” she says. “Because it had literally never been done.”

Higgs had no Passive House training, but the firm did have expertise in the methodology, and she agreed without hesitation. She believes the decision had positive effects that extended beyond environmental benefits, in that it rallied both the community and the departments running the building. “It worked so well with the integration [of programs] because with Passive House, you’re either 100-percent-in, or you’re not Passive House. It has a ton of operational and spatial implications, so it required the client team to be really collaborative.”

The typically residential orientation of Passive House meant that many new design and engineering trails had to be blazed. With a house,  providing winter warmth is key. Not so with a community centre, modelling quickly revealed. “In an entire year, there might have been two days when we would have had to heat the building,” says Higgs, explaining that this was the case because of the energy gains from people, equipment and lighting. “We actually had to strip away some of the insulation and get it to a more conventional envelope.”

On the flip side, keeping the building comfortably cool was a major challenge. Huge roof vents and optimized natural ventilation were part of the answer, but a facility so large and with such diverse components ultimately required several different solutions. These included a Passive House-certified heat recovery ventilator, radiant ceiling heating and cooling panels, and a focus on natural light and low-energy lighting fixtures. The program placement needed to be tailored in myriad ways, too: for instance, gyms and exercise facilities were placed against the north wall, where the excess heat load they generated would best balance out. When temperatures rocketed above 40 degrees during last summer’s heat dome, the building remained respectably cool.

Both residential and commercial Passive House buildings rely on a highly airtight building envelope. This remains an asset even in pandemic conditions, allowing the building’s air flow to be precisely set to ensure an ample supply of fresh air balanced with comfortable temperatures. “An airtight envelope is not about eliminating air flow—it is about controlling and regulating air flow,” says Higgs. “This fall, even with much lower usage levels, the motorized windows were often open in the fitness centre to maintain the internal set point temperature. During regular usage, the building would also be flushed nightly through the clerestory windows to keep the internal temperatures down to a comfortable level. So there is potentially a great deal of air exchange—it is just highly regulated.”

“There is a misperception that the air-tightness requirements of a Passive House building result in a strict separation from the surrounding environment,” adds Higgs. “In fact, Passive House buildings can be quite open to the exterior. This is ideal for spring and summer days, when the outside temperatures are close to the desired interior temperature.” At Clayton, the central social space includes large, manually operated sliding doors that allow the interior social space to open onto the adjacent outdoor terrace.

At just over $500 a square foot, the Clayton Community Centre cost roughly 10% more to build than similar complexes during the construction period—a surcharge that Higgs chalks up partly to the innovation premium of being the first of its kind. That investment has already yielded dividends not only in energy—the facility reports 75% energy savings and 98% carbon savings compared to other community centres in BC—but also in the expertise generated among the consultant, owner and contractor teams. Higgs describes how at one point, the contractor built a full-scale façade mockup to orchestrate the sequence of construction moves needed to meet Passive House’s rigorous airtightness standards. The envelope, along with many other details, required a precision of construction that went beyond the status quo—but that also brought a real pride to the building team. The quality of their work was confirmed by blower-door tests, which showed that, in terms of air changes per hour, the building was more than three times as airtight as it needed to be. 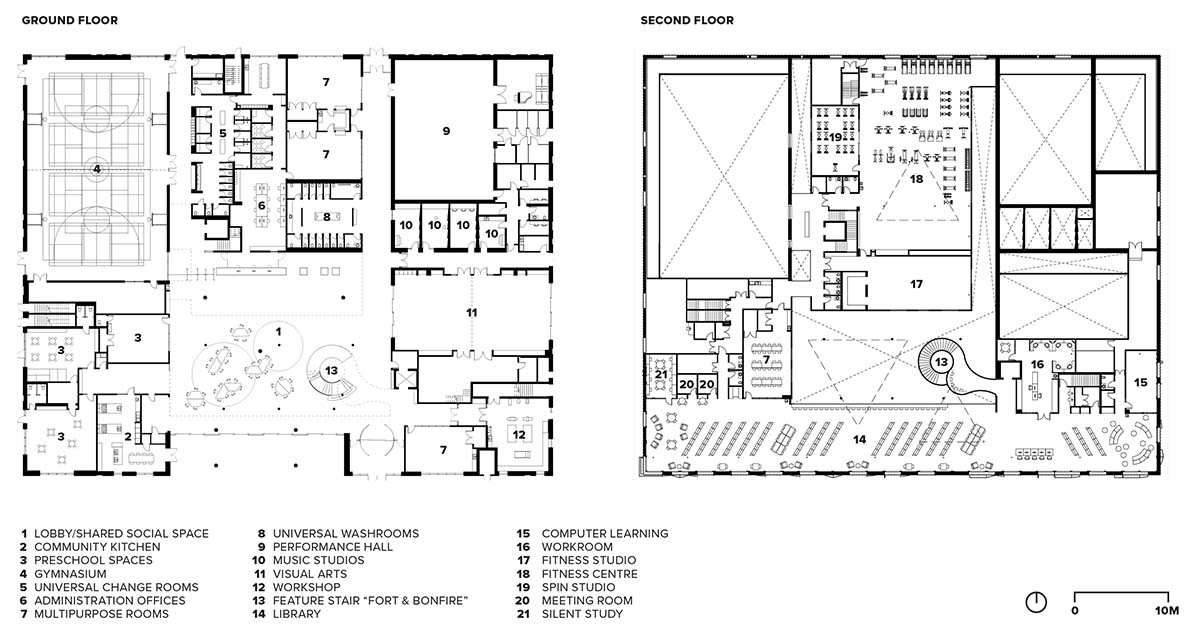 Even beyond the floods and heat domes, current requirements under BC’s Step Code and upcoming revisions to the National Building Code mean that many—if not most—future construction projects will have to follow similar paths. Client and architect agreed that a building with such important implications would have to be handsome as well as efficient. And it is. Early on, the feeling of standing in a forest became a design inspiration, and looked upon from the outside, there’s a sense that the structure is like a grove of trees, lighter and more compact at the bottom, and darker above as the branches spread. Inside, an irregular matrix of Glulam beams evokes a forest canopy.

“All along the way, we thought of Passive House as just one of the balls that had to be juggled,” Higgs says.

Jim Sutherland has been editor of magazines including Western Living. He lives in Vancouver, where he writes comic novels sometimes involving architects.