Flying from Toronto to Fort McMurray is like being on a military transport. The plane carries 167 men and 13 women. The men are, for the most part, big and brawny. They wear baseball caps and jeans. They aren’t talkative. Although it’s mid-morning, the majority of the window shutters are drawn as they try to get some shut-eye before landing.

Fly-in, fly-out workers at the oil sands generally arrive for a week or two at a time, staying at camps of temporary housing at the oil fields. These are the most frequent patrons of Fort Mac’s new airport—a surprisingly elegant addition to an area which otherwise offers little of architectural merit.

Steve McFarlane, FRAIC, and Rob Grant of Office of McFarlane Biggar (OMB), the firm that completed the project, met me in Fort McMurray on a sunny June day. Light streams through the airside portion of the terminal, and windows at both ends offer expansive views of the surrounding fields and boreal forest beyond.

“Everything here is big: big sky, big forest, big industry,” says McFarlane, the principal in charge of the project. “That’s what drove our design thinking: it didn’t want to be a really precious building. It wanted to have a toughness, a robustness to it.” At the same time, the designers wanted the building to be sophisticated. “I don’t think those things are mutually exclusive,” he adds.

Spatially, the terminal is divided into two bars—the pre-check-in “landside” and the secure “airside.” The quality of space in the waiting areas is crucial, both in the landside arrivals hall and airside departures lounge. Oil-sands workers typically get bussed directly to the work camps, some of which are hundreds of kilometres away. Often, they’ll be waiting in the airport for three to five hours after arrival or before a flight. 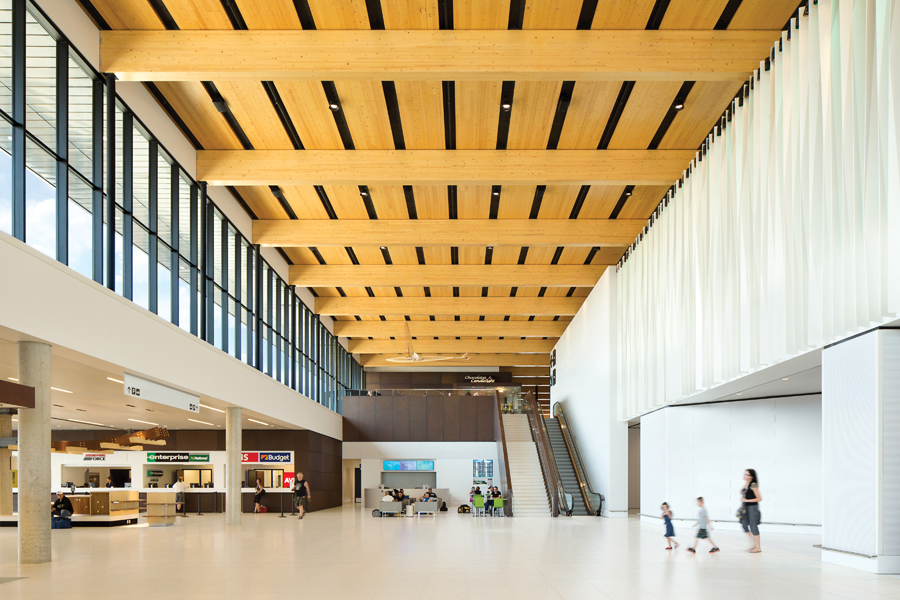 “We’ve all been in airports where the arrivals experience is like coming into the basement,” says McFarlane. “There’s no daylight, you have no idea where you’ve just arrived.” In contrast, the designers created a bright, double-height arrivals hall featuring an integrated artwork whose ribbon-like strips evoke the Northern Lights. Exceptionally, the baggage hall opens onto a south-facing outdoor courtyard equipped with wood benches and planted with trembling aspens. In the winter, the courtyard becomes a suntrap that funnels light into the arrivals zone.

On the departures side, generous waiting areas supplement a series of bustling food-and-drink concessions (the camps are dry, the airport is not). The continuous, high-ceilinged spine for the departures area is clad and crowned with warm-toned wood. The mass-timber roof system consists of glulam beams, overlaid with 7-ply-thick cross-laminated timber (CLT). Service chases between the CLT panels were used for incorporating lighting, sprinklers, PA speakers, smoke detection devices, sound control and signage elements.

Other details contribute to keeping the departures space visually clean and coherent. The textured wooden wall that divides the airside from the landside is a two-and-a-half-foot-thick cavity that contains mechanical infrastructure. It also integrates washroom entrances, signage and waste receptacles—the kind of extras that often clutter airports. Its surface bears a pleasing pattern of vertical striations that conceal acoustically absorptive insulation. Acoustic treatment is a necessity considering that there are no carpets in the facility—a practical decision, as carpets would have quickly gotten caked with dust and mud from work boots.

Material choices throughout the facility were made with robustness and sophistication in mind. Corten panels wrap the main entrance outside as well as demarcating commercial amenity spaces inside; the material was chosen for its tough-yet-trendy look and feel. The exterior is otherwise clad in dark grey steel, with precast concrete panels adjacent to the flight apron providing a clean, damage-proof surface (service vehicles have been known to collide with airports).

The use of pre-fabricated materials, such as the roof’s glulam ceiling beams and CLT panels, reduce reliance on local labour—an important consideration since skilled trades are absorbed by industry in this part of Alberta. As a result, construction workers for projects such as the airport are expensive and transitory.

Significant costs accrue from the necessity to fly crews to site: almost all of the labour for the project was from out of town, says project architect Rob Grant. Many of these labourers weren’t accustomed to working to high standards. Others were taken by surprise by the extreme cold of the winter, where temperatures regularly reach minus 40 degrees Celsius. Despite their cold-weather gear, a building envelope crew from the Bahamas was challenged by the winter conditions. “That was an example where the work had to be redone a couple of times,” says Grant.

The inherently forgiving nature of the wood ceiling system—dimensional tolerances are much more lenient than concrete—became key to the project’s success. “The two-storey core for one of the new elevators was out by four to six inches,” recalls Grant. “Having the ability to adjust the tie-in of the wood roof allowed that condition to be accommodated.”

Given the quick pace of change typical of airports, certain elements offer built-in flexibility. For instance, rather than create a separate area for international arrivals, a temporary dividing wall can be pulled in place to create the necessary secure zone. If there are no international flights on a particular day, the airport gains an extra domestic gate.

On the landside, a raised access floor—the first application of such a system in a North American airport—allows for check-in counters to be easily added or reconfigured. Taking advantage of the two-foot-deep plenum, scales were embedded flush to the floor surface for a more integrated approach.

When more gates are eventually needed, modules can be appended to the airside half of the terminal, extending the bar further to the east and west. “We’ve built in the measures in this building to allow renovations and expansions to happen with little disruption to the day-to-day,” says McFarlane.

The new airport has seen 1.25 million passengers in the past year, making it the 15th busiest airport in Canada. Even with the downturn in oil prices, those numbers are staying high—volumes so far this year are 11 percent lower than during the same period last year, but in 2014, volumes had gone up nearly 10 percent. If anything, explains project architect Rob Grant, the flights are now being bundled into tighter periods in the day—a development which may necessitate expansion sooner rather than later, as the airport’s capacity is based on peak-hour traffic.

Still, oil’s recent bust is palpable in some of the promised but missing elements around the airport. A hotel connected to the airport, sharing its outdoor courtyard, was once planned. A multi-acre nearby parcel has been designated for a major commercial development. As yet, these sites remain open fields.

At one point, oil extraction was proposed on the airport lands—in turn, the designers contemplated the possibility of using waste energy from the oil extraction process to heat the new building. It would have been a surreal and perhaps slightly dystopian scenario, but certainly a sign of a continued boom rather than the present state of uncertainty.

As it stands, the airport remains a rare jewel in the region: an assertion that industrial buildings don’t have to be ugly; that even tough guys appreciate nice places; that sophistication can, indeed, coexist with robustness.