The Bentway, a unique public space designed by Public Work and Ken Greenberg Consultants — located under the Gardiner Expressway, is promising to change how Torontonians gather and experience art and events downtown. The first section to be developed, The Bentway Skate Trail, will officially open to the public on Saturday, January 6, 2018 at 11 am with special events all weekend.

The linear park is a unique and innovative public space that transforms 1.75 km underneath Toronto’s Gardiner Expressway, from Strachan Avenue to Bathurst Street, into a new gathering place for our city’s growing population. The initial phase, a 1.1km trail and series of public spaces, knits together seven local neighbourhoods with over 70,000 residents, becoming a gateway to the waterfront, while providing access to important attractions and destinations – from Fort York National Historic Site, Ontario Place and Exhibition Place to Harbourfront Centre and the CN Tower.

Made possible by an unprecedented public-private collaboration between the City of Toronto and donors Judy and Wilmot Matthews, The Bentway (which was provisionally known as Under Gardiner) is designed to animate the previously unused and uninviting beneath the all too prominent — and controversial — downtown expressway. Through excellence in stewardship, innovative programming, and world-class design, The Bentway seeks to engage the vibrant and diverse communities in the surrounding area and draw visitors from around the world.

Once complete, the Bentway will offer year-round activities and events, including gardens, a skating rink, recreational amenities, public markets, public art, special exhibitions, festivals, theatre and musical performances and more. The park will be maintained, operated, and programmed by The Bentway Conservancy. 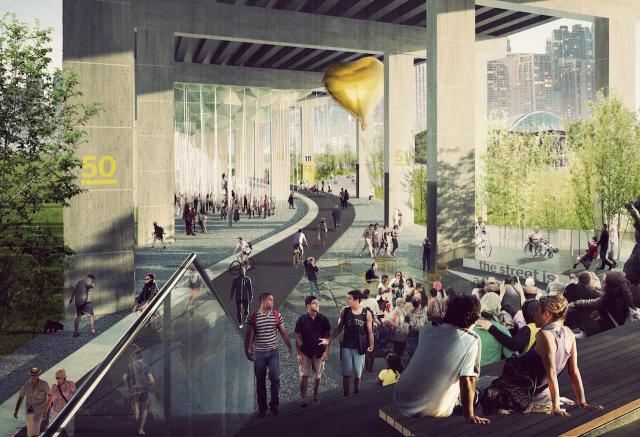 The project was made possible through the collaboration of a range of city-builders and experts, including the City of Toronto, Waterfront Toronto, Judy and Wilmot Matthews, Ken Greenberg Consultants, Public Work, Fort York National Historic Site, and Artscape. The Bentway is a proud member of the High Line Network, an international network of projects that transform underutilized infrastructure into new urban landscapes.

As of January, ongoing winter programming will include free Monday night skate rentals; Beats and Bents Friday night skate parties with a rotating cast of DJs, and skate instruction and DJ and Ice Breaking Workshops. A skating village, designed by + tongtong, will be installed at The Bentway and will house the skate rental shop, warming stations and a variety of seating options.