The Idea Exchange Old Post Office is located in the former town of Galt, steps away from the historic main intersection, directly on the Grand River. Politically, the project lies at the heart of the City of Cambridge’s effort to revitalize its downtown areas and strengthen their connection with the Grand River. A three-minute walk from the Queen’s Square library branch, the new digital library is part of the Idea Exchange network, a set of well-designed libraries in the former towns of Galt, Preston and Hespeler. All of this together forms the context for this new branch: a network of beautiful library buildings, a sleepy downtown, a main artery and the Grand River—but also the desire to cater to the digital world of learning wherein production, creation and play claim the space traditionally occupied by the silent consultation of stored books. 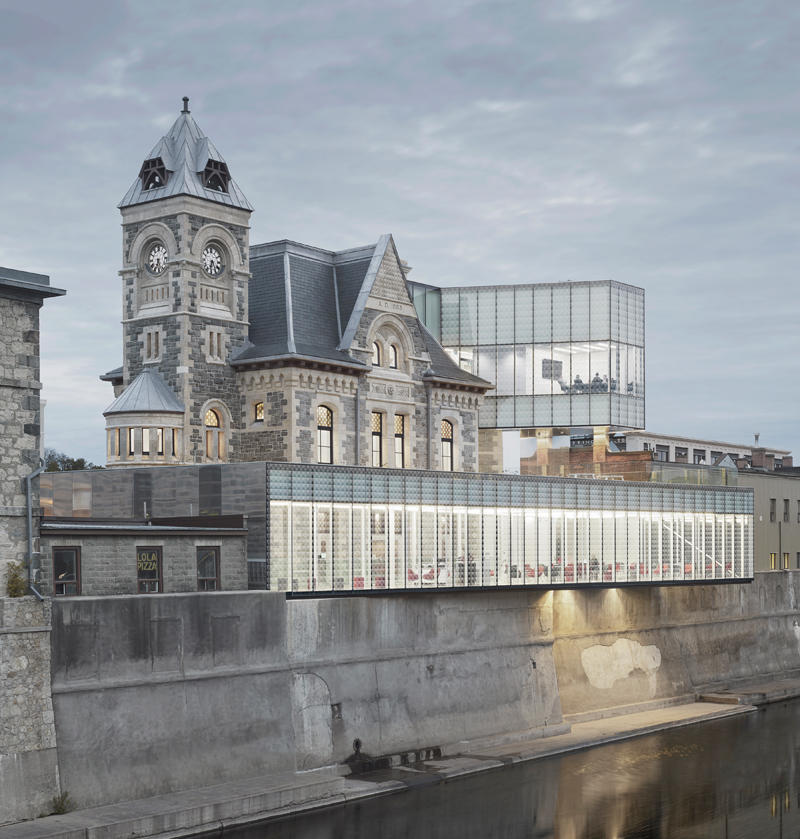 RDHA came to the project with a portfolio of library buildings and renovations, including their Governor General’s Award-winning work on the Bloor/Gladstone Library in Toronto, a 1,115-square-metre addition to a listed heritage building. In Cambridge, the project called for the transformation of a skillfully executed granite-and-limestone post office designed by Dominion architect Thomas Fuller (1823-1898), who worked on Ottawa’s Gothic Revival Library of Parliament. Built in 1885 and designated a National Historic Site in 1983, the Galt Post Office was part of an effort to stake a federal presence through monumental buildings on key sites. With its Romanesque round-arched portico, Second Empire mansard roof and neo-Gothic turret flanking a clock-tower, the post office is an eclectic yet balanced composition, unified by articulated stonework details and rock-faced ashlar walls.

RDHA’s task was as much to re-anchor the heritage building as a monumental site in a lovely core awakening from dormancy, as it was to give shape to the somewhat paradoxical notion of a bookless library. In terms of architectural heritage, RDHA uses a clear strategy reminiscent of their approach at the Bloor/Gladstone Library and of Kongats Architects’ recent addition to the Carnegie library in nearby Hespeler. To distinguish between the old and the new, these three projects have glazed additions that set themselves apart from the existing masonry constructions. For the Old Post Office, RDHA predominantly used glazing to break the original symmetry between the front and back façades of the Fuller building. Preserving the integrity of the composition on the Water Street side, the architects very freely and rather exuberantly departed from it on the Grand River side. Between the “heritage” and “innovative” sides, certain elements call each other out, such as a diamond-patterned custom ceramic frit that cuts glare in the room over the river, and picks up on the motif of the pediment’s stonework. The result is a very solid presence of the heritage building and a no less active manifestation of the glazed addition.

In the process of transforming the post office, the architects had to double the area of the building on a rather constricted site. An irregularly shaped group of rooms, corridors and circulation cores—including a large lounge and a smaller meeting room—are daringly cantilevered off the back of the heritage building to extend above the Grand River, while other glazed volumes wrap around both sides of the building and land back on Water Street. If these boxy, transparent growths make the building appear somewhat clumsy in certain areas, they also offer exciting views of the surroundings. From outside, the strategy makes for some unexpected projections, whether glimpsed from Water Street, from the adjacent vehicular and pedestrian bridges, or from across the river. In contrast to the monumental Fuller building, the informal glazed protrusions make the building brighter, more open and welcoming. Even the glass entry box, which sits a bit oddly to the north of the Fuller building, is redeemed by the fact that it announces a commitment to universal accessibility.

Compositionally, there are moments when the resolution settles on somewhat haphazard encounters between the old (stone and slate) and the new (glass and metal). But the lopsided addition with its eclectic volumes could not make a more powerful case for a city that seeks to return to the river. Ultimately, questions of composition and proportion are subsumed in the overarching gesture that undeniably stands as a contemporary embrace of the nineteenth-century presence.

The opportunity to celebrate some of the existing craft is not lost, and the work on the old clock tower as well as the careful restoration of the masonry walls are exemplary in this respect. If RDHA’s renovation and addition to the Old Post Office meets high expectations at the urban level, this in part owes to how it successfully reinstates the heritage building as a valued and active piece of the core. Descriptions of the Fuller building frequently brought up the idea of the picturesque in reference to the roofline, the combination of details, and the attached elements such as the clock tower and porches. RDHA scales up and accentuates this quality, obviously enthralled by the way in which the new glazed attachments perform as they are perceived from different points in the city.

Inside, the duality between old and new is also at play. The circulation takes visitors in and out of the old building, with accompanying shifts in material palette and light intensity. Everywhere, hallways are as tight as possible in order to maximize the inhabitable space. But what is inside a bookless library?

I am reminded of Ian Sinclair’s quick dismissal of one of the precedents for this type of program, when he writes of a friend’s “physical difficulties, the struggle for breath provoked by a confrontation with […] gaudy Ideas Stores in place of serious book-lined libraries.”1 This comment might resonate with us book lovers. However, as the Old Post Office also happens to sit across from the University of Waterloo’s School of Architecture, it is hard to ignore the intriguing questions raised by the first architectural embodiments of bookless libraries. What is the role of architects in re-thinking both the spatial and programmatic characteristics of such buildings in our digital world?

Here, the lower level offers a black box theatre with film and audio recording suites, gaming areas and musical instruments. The main floor is nearly entirely dedicated to a café that can serve as a reading room or public presentation area. The second floor is equipped for children’s explorations—with smart tables, lite brite and magnetic walls, computer stations and robot-building kits—and the top level fosters adult creativity, supporting endeavours from sewing to carpentry and 3D printing. Making is the new reading.

Our traditional library buildings did not develop overnight, evolving gradually from monastic settings, to variously include programs such as the storage of books, the facilitation of book circulation, and the offering of monumental reading rooms. More recent changes have led to contemporary iterations on the model of OMA’s Seattle library. Likewise, the digital library is a type that will have to be defined over time, on its own terms, and not solely as an antithesis of the traditional library.

RDHA’s response to this novel program is one in which sequencing is key. Through the dual circulation cores and our movement between them, opportunities for learning and interacting are interwoven within the building, together with lessons from the historic building, experience of the immediate site and views of the greater urban context. The architects ultimately succeed in combining community revitalization with heritage preservation, achieving an architectural master feat of doubling the area and amount of daylight in an 1885 masonry building, and solving an engineering puzzle with great spaces overhanging the river and amphibious feet below the flood line (with a fully functional and heavily programmed lower ground floor). All this within a careful negotiation of old, new, centre and periphery that embraces accessibility in its broadest sense.

Entirely predicated as it is on the intricacy of the task and the tightness of the site, the project does not establish a new bookless library type, nor does it yield paradigmatic lessons on heritage and conservation. And yet, if we are to truly consider rebuilding mid-sized cities around their downtown cores, we need more buildings like the Old Post Office: projects in which the municipality clearly stakes a claim that promotes development while preserving heritage, with an idea of conservation rooted in the contemporary integration of structures in today’s urban life. The constant flow of people of all ages to the Old Post Office since its opening testifies to its ability to do just that. This project might be seen not exclusively as an exemplar of adaptive re-use, but more subtly as one of many possible approaches to heritage preservation—a spectrum that takes us from Viollet-le-Duc’s idea of reinstating a building “in a condition of completeness which could never have existed at any given time” to the candid, open and even slightly unpolished propositions of a present we had never quite imagined.

Anne Bordeleau is O’Donovan Director of the University of Waterloo School of Architecture.