The challenge we face is overwhelming and complex. Our industry’s emissions currently account for 40 percent of total global annual CO2 emissions. Of that, a third is attributable to embodied carbon. The attention we have paid to energy efficiency—via improved insulation properties, renewable energies, and passive systems—has led to significant operational improvements in the last two decades. But over that same period of time, we’ve put half of all historical CO2 into the atmosphere. This is in part due to the fact that we’ve been largely focused on only part of the problem.

To meet the 2030 Challenge, we need to not only achieve net zero operational carbon, but also radically reduce embodied carbon. We need to face new questions: How do we now choose between two different window options, two wall assemblies, two concrete mixes, two structural systems? Assuming both options perform and cost the same, does either contain materials that were sustainably sourced, processed and transported? Does either option have half the carbon footprint of the industry norm? What is the norm?

There are many facets to the carbon profile of materials—the Carbon Smart Materials Palette website by Architecture 2030 is among the best resources for further research. But architects often ask me for a basic primer on the main materials used in building structures and envelopes. Here’s a material-by-material assessment, focusing on the biggest carbon considerations for each material.

The main environmental impact associated with concrete stems from its cement. Although cement makes up only 10 percent of the concrete mix, it is responsible for over 80 to 90 percent of concrete’s embodied carbon. Cement production involves heating a mixture of limestone, silica, alumina and gypsum to 1,400-2,000 degrees Celsius. The heat-intensive process often uses fossil fuels, but also, the chemical reaction itself generates CO2. Anything you can do to reduce the amount of cement in your concrete mix will have a significant impact on the overall embodied carbon of the concrete.

One suggestion is to use Portland Limestone Cement (sometimes called general-use limestone cement) in place of regular Portland Cement. In this type of mix, limestone displaces some of the cement. This substitution has no major structural implications, and can lead to a 10 percent reduction in Global Warming Potential (GWP). Supplementary Cementitious Materials, such as fly ash or slag, can also be substituted for cement. Strategies such as using post-tensioned slabs or voided concrete—such as hollow-core slabs, waffle slabs, or bubble-deck systems—may also help reduce the overall amount of concrete in a structural system.

Performance-based specifications can also be a useful tool to choose instead of prescriptive specifications. This may require testing or other procedures. Prescriptive requirements may prevent ready-mix suppliers from delivering the lowest embodied carbon concrete for a particular application.

There are two ways of producing steel: using a basic oxygen furnace or an electric arc furnace. The steel made with basic oxygen furnaces is much more emissions-intensive. These furnaces burn coal or natural gas, and the feedstock is largely virgin iron ore, with 25 to 37 percent recycled material. This type of steel makes up 71 percent of global steel production and is the predominant type produced in Asian steel plants.

Some 68 percent of steel produced in the United States, and 40 percent of Canadian steel, is made using electric arc furnaces. This lower-emissions method uses more recycled steel scraps—up to 100 percent, with an average recycled content of 93 percent for hot rolled shapes. Because it’s an electricity-driven process, the carbon-intensity of the local electricity grid impacts the carbon-intensity of the resulting steel.

For most materials, transportation is only a small slice of the carbon impact—production technology and the electricity grid (in the case of electricity-driven processes) tend to matter more. This holds true for steel, where typically over 90 percent of carbon emissions come from steel production, and less than 10 percent from transportation and fabrication.

In a steel structure, consider using steel that comes from electric arc furnaces in areas with a low-carbon electricity grid, and specify high-recycled content steel whenever possible. Look for shapes that come from electric arc furnaces. In North America, these typically include hot rolled shapes such as wide-flange members, angles, channel shapes and rebar. Hollow structural shapes and metal deck are typically made at mills with basic oxygen furnaces. 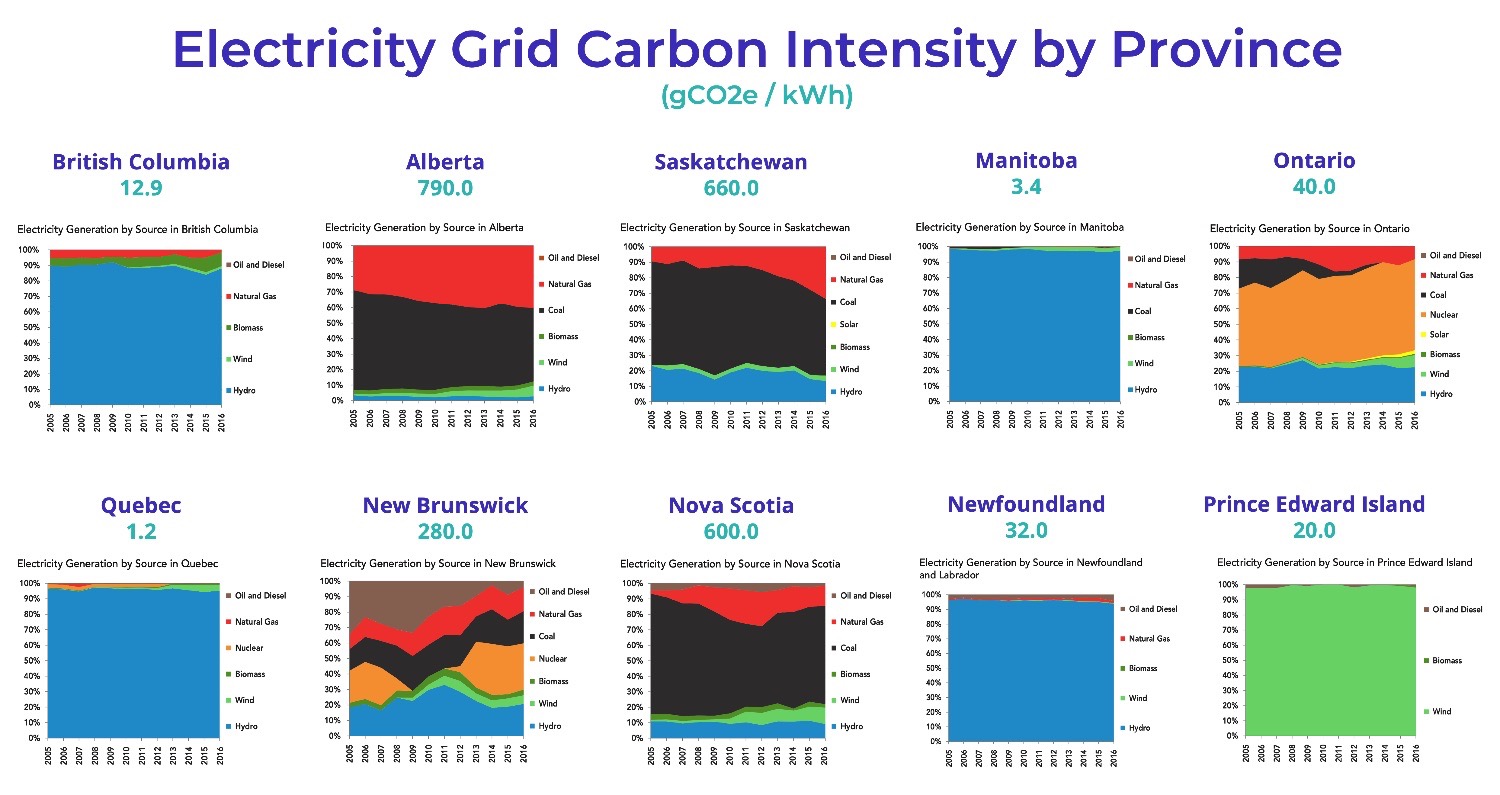 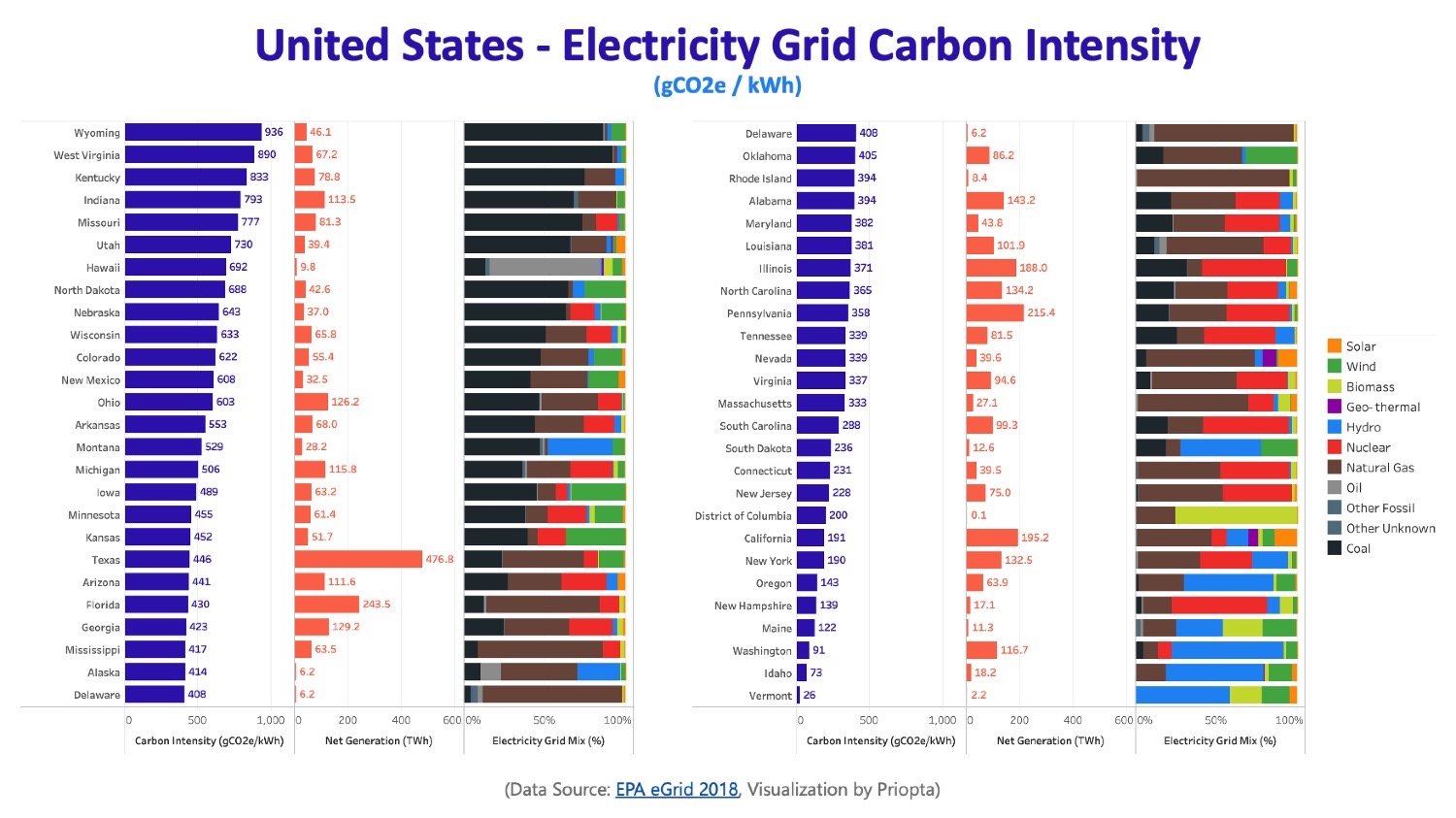 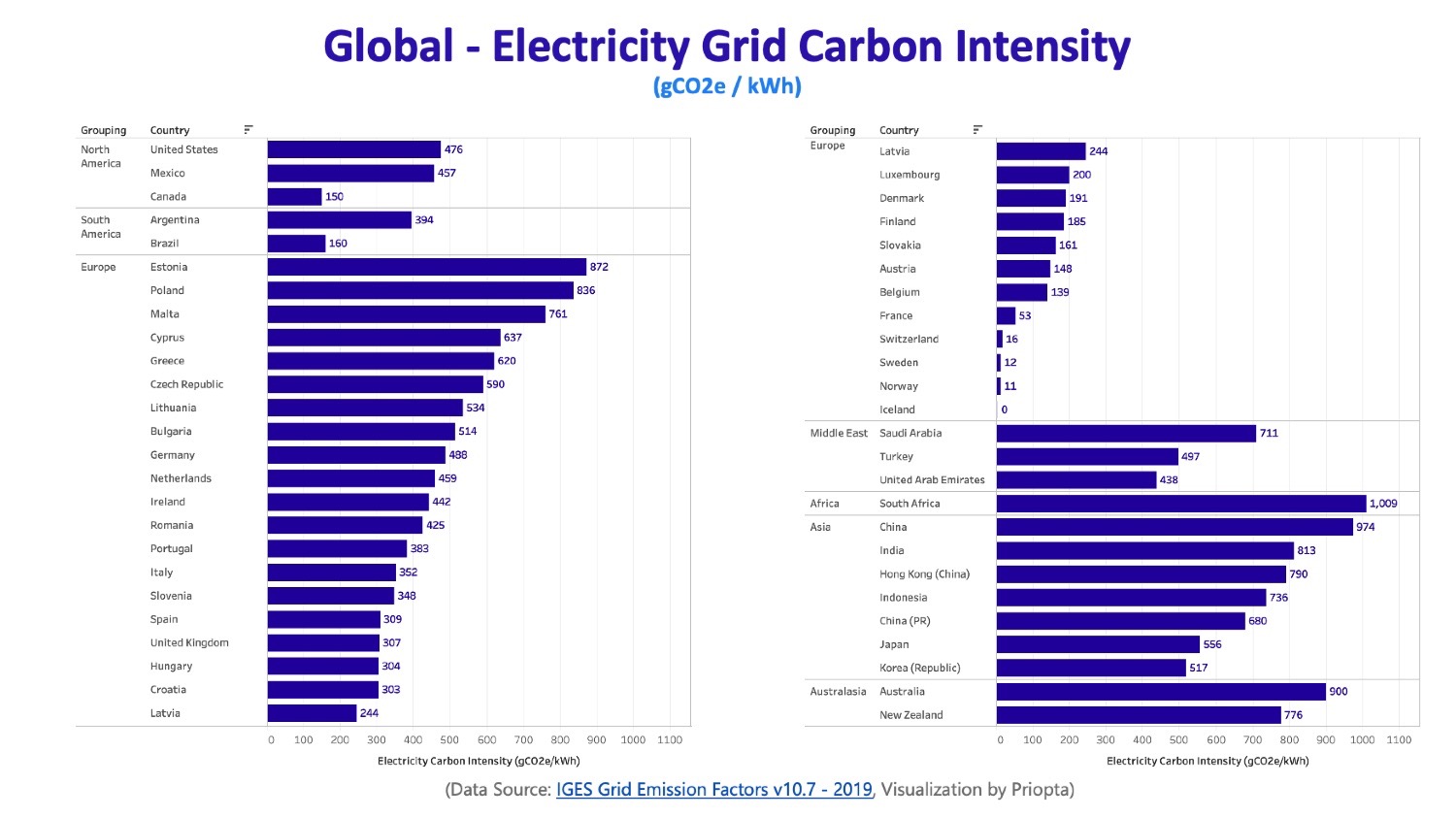 In Life Cycle Assessment (LCA) calculations, wood structures generally show lower emissions compared to concrete and steel, although this is not always the case. Using wood in buildings is one of the best uses of the material, as it locks in its captured carbon for a long period of time.

We suggest specifying wood that comes from sustainably managed forests and avoiding wood harvested from primary old growth forests. Forest management practices can significantly impact the carbon footprint of wood. However, there are still many questions around the forest-related impacts on biogenic carbon that aren’t fully captured in LCA studies. For instance, what’s the impact on soil carbon of increased wood harvesting? What would the carbon sequestration have been if you left the forest alone?

On a landscape level, BC’s wildfires in 2017 and 2018 generated three times the province’s emissions from all other sources. Climate change is making our forests more prone to large wildfires; consideration and additional research is needed as to whether the forestry sector plays a role in increasing or decreasing wildfire risk, as there are arguments on both sides.

What happens in the forest sector will have a huge impact on global emissions. Our forests can be one of our biggest carbon solutions, but also one of our biggest emitters if we don’t treat them the right way. It’s on a whole different scale than trying to distill how much carbon is stored in a cubic metre of wood.

Primary aluminum production is energy-intensive, using about ten times as much electricity as steel and accounting for four to five percent of global electricity demand. As such, the key factor that impacts the embodied carbon of aluminum is the carbon intensity of the electricity used. Canada is the world’s fourth largest producer of aluminum and has the lowest carbon footprint of the large producers, since it uses mostly hydroelectricity and the latest generation of technologies. For example, primary aluminum production from Asia emits around 17 kgCO2e/kg aluminum, while the same material produced in Canada emits around 2 kgCO2e/kg aluminum.

Ideally, building envelope design should consider impacts on both operational and embodied carbon. For instance, triple-paned windows will be higher-performing on the operational side, but the extra layer of glazing will have impacts on the embodied side. Glass itself is not particularly carbon-intensive, but the materials used for framing it can drive emissions up. Curtain wall assemblies, for example, can have high carbon emissions because of the aluminum content of mullions.

Aluminum should be treated as a high-value material and should be used sparingly, where possible. Specify aluminum from regions with low-carbon electricity mixes. Timber-framed glazing is a great low-carbon option for residential construction, as timber has low embodied carbon and better thermal performance than steel or aluminum.

XPS and spray foam insulation can have extremely high embodied carbon due to the hydrofluorocarbon (HFC) blowing agents used. All XPS and most spray foam in North America currently uses HFC blowing agents. This gas has a greenhouse impact over a thousand times greater than the equivalent amount of CO2, so small traces released during installation and through off-gassing carry a huge Global Warming Potential. Through my research, I realized that some building LCA tools have significantly underestimated the embodied carbon of XPS and spray foam insulation, as they did not properly account for the HFC blowing agent impacts.

In Europe, HFC blowing agents are banned, and in Canada, they are due to be banned starting in 2021. Some US States will also have legislation in place to limit the use of HFC. New XPS and spray foam products using lower GWP blowing agents will be coming to market next year, so be sure to specify them—particularly in projects outside of Canada that will not have HFC regulations in place.

Where possible, consider using insulation materials that naturally sequester carbon, such as cellulose, wood fibre, and straw. However, it is important to consider the impact on both embodied and operational carbon when comparing insulation options.

Embodied carbon, as a field, is a blind spot. But there are blind spots within the blind spot—such as the forestry side of wood production and the blowing agents used for insulation.

Life Cycle Assessment studies typically only look at structure and the envelope, but the materials used in HVAC systems and cyclical tenant improvements can also tally up in carbon impact.

Another major blind spot is refrigerants. The near-term impact of refrigerants released into the atmosphere has an outsized role in global warming, compared to other greenhouse gases. We typically quantify the operational carbon savings from using a mechanical system such as Variable Refrigerant Flow, but neglect to account for the global warming impacts of refrigerant leaks.

With Life Cycle Assessments, we are generally focused on finding lower-carbon material options. A bigger lever is choosing to retrofit existing buildings, where the structure and envelope are repurposed, taking advantage of the carbon already expended.

Efficient space planning is also important. In the UK, the housing demand is 34 m2/person, whereas in the United States, it’s 68 m2/person. In Canada, residential floor area per capita varies from city to city—it’s 34 m2/person in Toronto and 63 m2/person in Calgary. How can we make more effective use of space?

When we think about problems worth solving, we’re looking for problems that are big, solvable and ignored. Operational carbon is a very big, solvable problem, but one where there is already significant focus. Embodied carbon is a place where we have significant potential for mitigating carbon. It’s a problem that merits our attention—and action—as an industry.

Anthony is the Principal at Priopta, a Life Cycle Assessment (LCA) consulting firm that is one of the first in North America to offer a custom Parametric LCA service for new construction projects. He is also the founder of CLF Vancouver—the first local hub of the Carbon Leadership Forum—which organizes local events that empower industry professionals to radically reduce embodied carbon from buildings and infrastructure. Since April 2019, CLF Vancouver has inspired over 25 other cities to start CLF local hubs. Anthony now also serves as one of the CLF Regional Hub Directors, supporting local hubs across Western North America and Asia-Pacific.

How can we design for greater community resiliency?