Hidden behind the rolling fog and dense forests of Indian Arm Provincial Park lie the time-worn hydroelectric generating stations of Buntzen Lake. Built in 1903, Buntzen was the first hydroelectric facility in British Columbia and has supplied Vancouver with inexpensive, sustainable electricity for over a century. Today, much of this infrastructure has gone offline, leaving behind an impressive legacy of unique hydropower structures in desperate need of a new life. 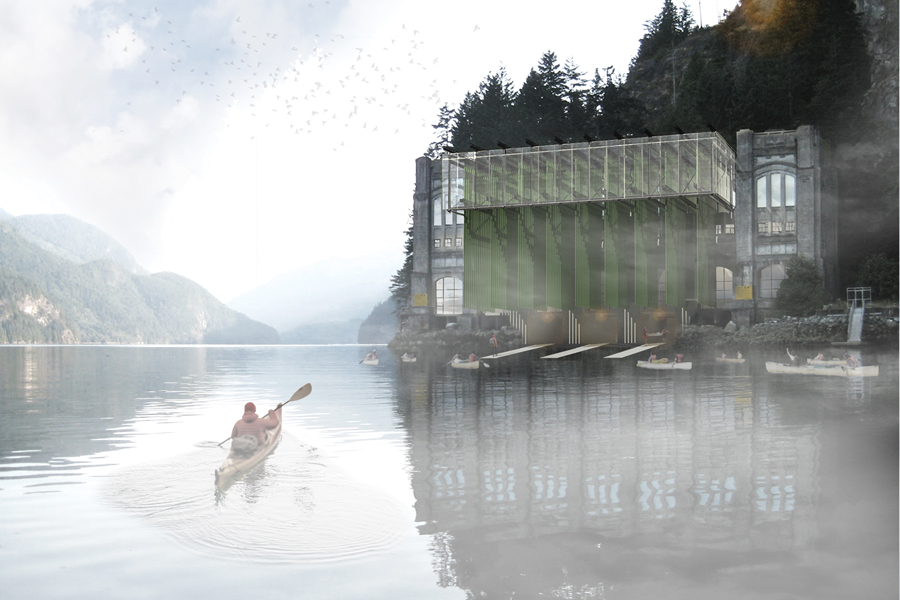 Buntzen’s structures have become symbols of place identity. They preserve memory, help us shape our understanding of the past and offer a site of new possibilities for future generations. While never intended for people, this remarkable network of buildings, tunnels, and turbines contain rare spaces with qualities not replicable in new construction. Electric Space proposes a phased adaptive reuse strategy that reimagines Buntzen’s decommissioned hydroelectric facilities as conduits for newly emergent, renewable energy industries and programmatic opportunities. 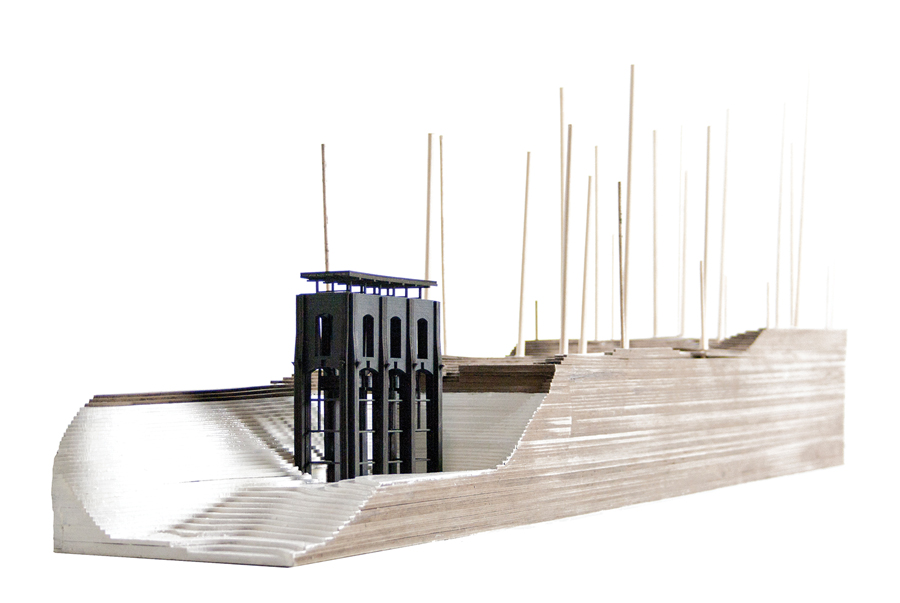 Phase 1  CATALYST responds to the Provincial Park’s lack of a formal entry and suggests transforming the powerhouse into a hybrid building that combines a park visitors’ centre with a micro algae research facility. In hybridizing these two programs, the Powerhouse Research and Visitor’s Centre serves as a catalyst for new programmatic development throughout the park, while preserving the site’s legacy of renewable energy production.

Phase 2  CONNECTION transforms the sluice gates and hydraulic tunnel into a vertical circulation network, connecting ocean and lake. Grafting onto the sluice gates, a small funicular allows visitors to travel 500 vertical feet along rusty pipes to the mouth of the hydraulic tunnel. Exiting the tram, visitors enter a dark tunnel and then, travelling along an elevated path, walk towards a light in the distance. At the end of the tunnel, visitors arrive to the abandoned surge tank: an oculus inside the mountain, open to the sky above. Once there, visitors enter a glass elevator car that ascends through the mountain’s core to the forest above. They then exit onto a bridge that frames a view back to Vancouver, the city that this facility has helped power for over a century.

Phase 3  REFLECTION repurposes the gatehouse that once controlled the intake of water into the hydraulic tunnel. Built in a lake, the gatehouse is quite often mostly submerged underwater, bearing unique weathering patterns from a century of rising and falling water. This proposal embraces wild water and suggests replacing the original floor with a floating wooden deck to embrace the lake’s seasonal transformations. Inserted in the deck are three tubs, built the same diameter and in the same location as the building’s original surge valve, which allow bathers to occupy a memory of the building’s former function. 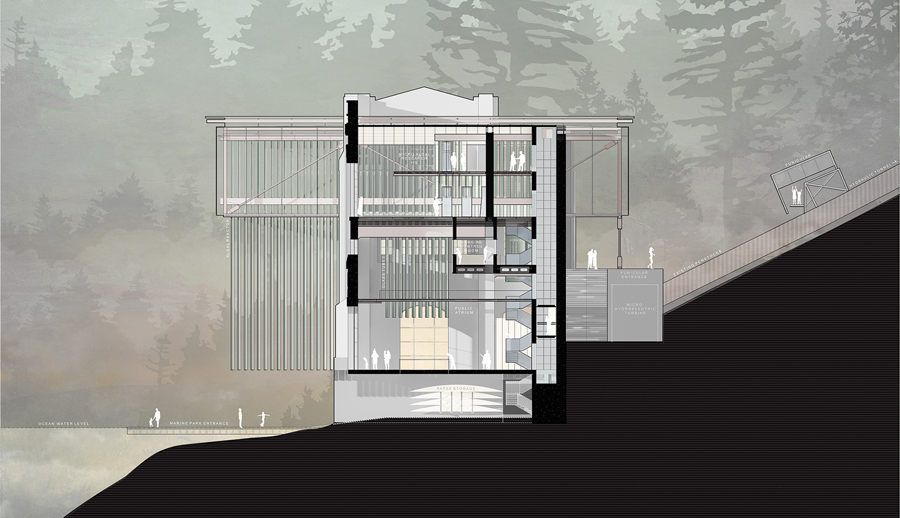 When approaching these decommissioned hydroelectric sites, my goal went beyond simply wishing to preserve what exists. By reimagining their former function and pairing the qualities of these devices with the programmatic needs of their surroundings, my belief is that adaptively reusing decommissioned hydroelectric sites dramatically enhances the experiential capacity and place specificity of surrounding parkland. In this alternate vision, there is a powerful opportunity to decipher the invisible energy of a landscape, creating a sense of place through time by connecting memory, community and nature inside these extraordinary industrial spaces.

Shirley Blumberg :: I appreciate the thoughtfulness with which this project reimagines heritage Infrastructure.

Jack Kobayashi :: The retouched historic photo has an iconic character that has stuck with me. The balance of the submission exudes a high level of competency. The project proposes creative, adaptive reuse solutions against the backdrop of Vancouver’s ongoing struggle to preserve its building heritage.

Steve McFarlane :: This project proposes an engaging way forward for our inventory of abandoned infrastructure. It undertakes a thoughtful reading of the specific buildings and site while imagining new programs that reinvigorate their relevance to modern life. The treatment of historic elements and their relationship with new interventions explores valuable questions about how new and old can coexist.