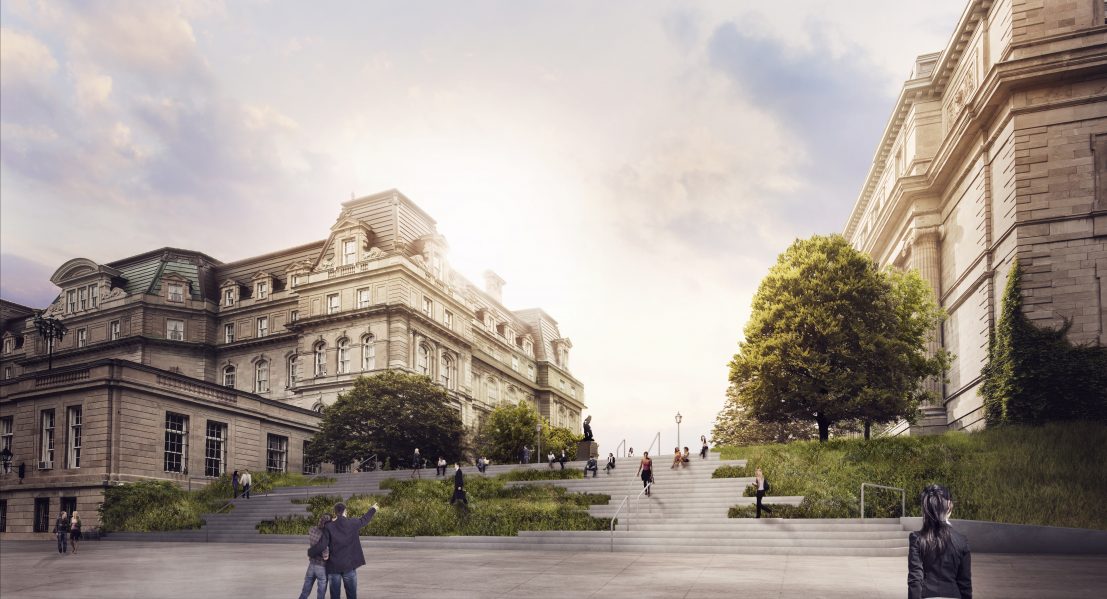 This spring, I had the privilege of serving as the outside voice on the jury for the Canadian Society of Landscape Architects’ Awards. Coming from my training in architecture, it seemed an easy fit—but the distance between the two design professionals is in some ways both smaller and greater than I had anticipated.

The proposals we evaluated dealt equally in paving as in plants, in parking as in parks—the hard materials familiar to architects. The buzzword around the jury table was “placemaking.” How well did a design reflect—and amplify—what was unique and important to a particular locale?

The Peace Garden at Nathan Phillips Square, by PLANT Architect (one of several firms with a foot in both professions), was admired for the way it carved out a place of sanctuary within the bustle of Toronto. A mix of native plants and a water feature were essential to this—but so was the broader planning process. This envisaged moving an ill-maintained garden from the middle of the plaza to its edge, creating space by mounding the new garden over a major exhaust vent for an underground parking garage.

Noticeably absent from many of the entries were scale drawings. One of the organizers said to me, only half joking, that architects ask landscape architects for plans at two times: when a project goes out to tender, and when the architect wants to submit for an award. I felt nervous judging entries without the usual trinity of plans, sections and elevations to consider. But while architects are more concerned about the impact of objects in abstract space—the information conveyed by line drawings—landscape architects are more finely attuned to the experience of the space between objects.

The most helpful documents, in this regard, were the short videos included in some of the submissions, including a playground by space2place that received an honourable mention. The video not only showed how the playzones were interconnected, but also featured children playing king of the castle on the mounds, and carrying pails of water to the sandpit. It gave the project the life that the jury was looking for beneath the surface of all of the entries.

That sense of lived experience was also important in considering bigger-picture submissions, such as master plans and cultural landscape inventories. Beyond meeting baseline professional standards, the jury aimed to anticipate what the future life of each document would be. How carefully was a study conducted? How comprehensive was the consultation process? Was a document likely to become a valuable reference, or to sit on a shelf and gather dust?

I was particularly impressed by a master plan for Montreal’s administrative district by Lemay, which went at studying the spaces from almost every conceivable angle. One spread was devoted to a sociological-style analysis of the way the public realm around City Hall was used, from early morning delivery trucks parking along fire routes, to midday sunbathers lounging on a patch of lawn—and other activities at night. Rarely would architects include a week-long site study of this type in their planning. For landscape architects, it was a worthwhile means of investigating the current use of a place, in order to inform its future design.

Perhaps my greatest surprise was our deliberation over a relatively modest project, which we eventually selected to receive one of the honourable mentions. The revitalization of downtown Fenwick, by The Planning Partnership, centered on the widening of sidewalks and incorporation of parking areas along a single intersection, and the creation of planting beds around a historic flagpole. One of the jurors persuasively argued that this was exactly what this small Ontario town needed: an appropriately scaled intervention that gave renewed dignity to its downtown.

In the end, that’s what placemaking is about: not about creating new places ex nihilo, but about finding the essence of an existing place, and bringing it to life. It’s a lesson that landscape architects and architects alike would do well to heed.