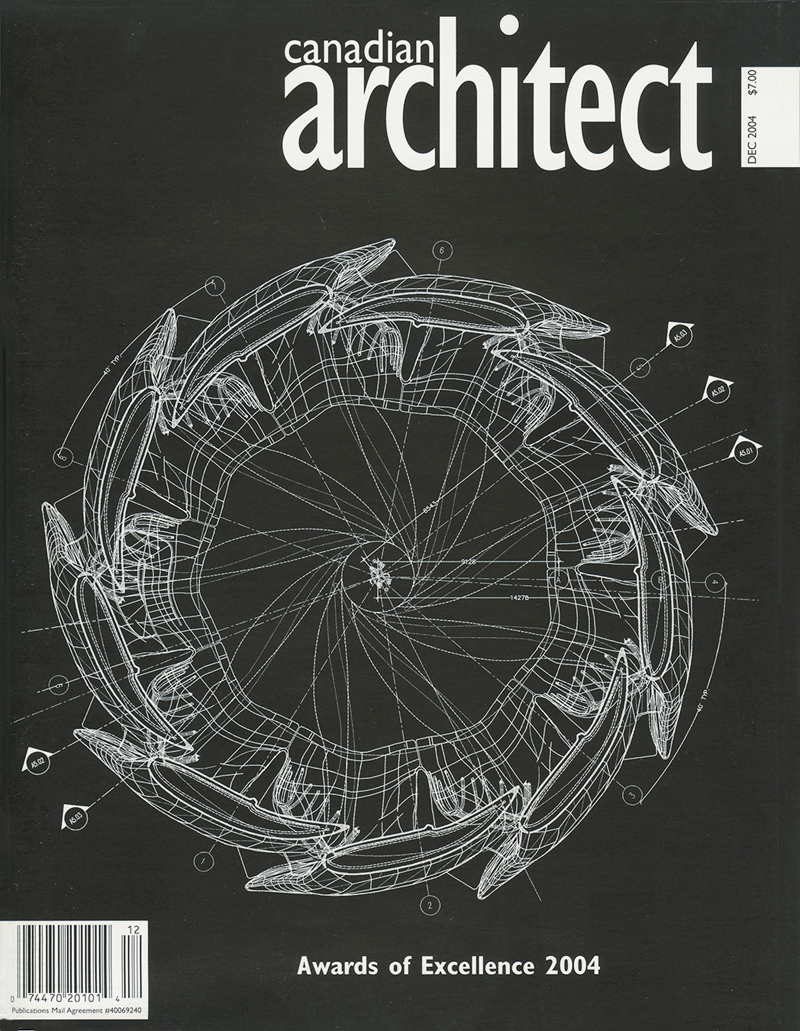 In 2004, the cover of the Canadian Architect awards issue featured a drawing of the nine-sided Bahá’í Temple of South America, a design by Hariri Pontarini Architects. 15 years later, in this issue, a stirring image of the temple appears once again (see page 53)—but this time, it’s a photograph of the realized temple, which was completed in 2016.

The photo is the winner of this year’s Photo Award of Excellence. Taken by doublespace, it captures the mysterious atmosphere and majestic scale of the temple, whose curved fins are brushed by the morning light coming up over the mountains.

Expressing the Bahá’í faith’s spirit of inclusiveness, the building has no pulpit or religious symbols. Instead, it is a circular form that uses the universal language of natural light. The cast glass exterior and translucent marble interior create a warm glow intended to lift the spirit of those who enter. The building was engineered to last 400 years in the rugged, earthquake-prone region.

What does it take to bring a project like this from concept to reality? Part of it was an exceptional client, with a deep-rooted commitment to seeing the project through in a way that, in itself, embodied the values of community and inclusivity.

The site selection process took nine years, and at one point, the Bahá’ís—despite being a relatively minor group—were offered a prime location in Santiago’s Metropolitan Park, in the centre of the city. All seven mayors agreed, and the land transfer was ratified in Parliament. But more established religious groups protested, so the Bahá’ís ultimately declined the site. The project aimed to bring people together, not to create contention, they said.

Rather than the risk-mitigating contracts that have now become pervasive, lead designer Siamak Hariri was given an old-fashioned architect’s mandate. He was responsible for everything from design to project management to site supervision. Hariri responded with a wholehearted commitment to the work, with its complex technical challenges—from the use of CATIA software for modelling the structure, to working with glass artist Jeff Goodman to develop the bespoke glass cladding.

All parties collaborated closely and in good faith, rather than litigating against each other. There were only four change orders, says Hariri. When steel fabricator Gartner Steel calculated that they incurred a loss on the project, the client reimbursed them.

The construction budget of $36 million was tight for a project of this ambition. “People threw their lot in,” says Hariri. Craftspeople were key among the team, taking pride in each piece of the work, from the patinaed bronze doors to the polished glass sheets. To have the necessary plant material for the landscaping, “there was this one woman, for ten years, all she did was plant saplings,” says Hariri.

Volunteers came from around the world to be part of the on-site labour. “The Germans [from Gartner Steel] were like, what the heck, we’re not going to work with volunteers,” recalls Hariri. But the volunteers’ dedication more than made up for their inexperience. “Believe me, after six months, they were begging for more volunteers.”

Ultimately, the project was a spiritual journey for those involved. “When something comes together really well, you feel it. Things that are well made speak to how, somehow, we are trying to reach for the divine,” says Hariri. “This is a universal longing of all of us. Whether we want to acknowledge it or not, it is part of the human condition.”

“The project had a will of its own,” he continues. “You start to think, where do ideas come from? The whole thing reverses.
We think that we architects think and draw and noodle, and it’s all ours. No way. People would come into this project and influence it in critical ways. The project is a reflection, in form, of that collective spirit.”

How architects can take advantage of R&D tax incentives