Designing for Change: Jury Comments on the 2021 Canadian Architect Awards of Excellence

Our jury’s comments on the pressing issues raised by this year’s award entries.

In some awards competitions, a group of submissions stands out clearly from the beginning. In others—including this year’s Canadian Architect Awards—arriving at a set of winners is a much longer process, involving detailed analysis, careful deliberation, and considerable discussion.

The complexities of judging this year’s submissions correlate, perhaps, to the experience of the pandemic. Many clients and architects were forced to pause construction for some time, spending more time masterplanning and iterating designs, and then quickly accelerate again when construction sites reopened. This, amidst growing discussions about how to achieve greater equity, diversity, and inclusion in society at large, as well as in the profession and practice of architecture.

For jurors Anne Carrier, Carol Phillips, Alfred Waugh, and photo juror James Brittain, this year’s 174 professional entries, 39 student entries, and 46 photo entries reflected the difficult questions that architects have been asking throughout the pandemic: How do environmental equity, social justice, and reconciliation manifest in design?

One typology that the jury saw as directly connected to the pandemic was a number of cabin-in-the-woods residential projects. They were more interested, however, in how architects tackled the more complex challenges of living together, rather than retreating apart. The jury chose to recognize Toronto-based Ja Architecture’s multi-unit Markham project as an architecturally ambitious response to the problem of densifying urban infill sites. They also awarded FBM’s design for a new office space in Halifax, combining the use of mass timber and the inclusion of residential and urban agriculture spaces on an urban site.

A modular approach to affordable, supportive housing was at the centre of another project selected by the jury, Montgomery Sisam Architects’ Durham Modular Housing. The project builds on several previous modular housing developments designed by the firm, and aims to provide dignified transitional housing, in keeping with the needs of residents as well as with the local vernacular. 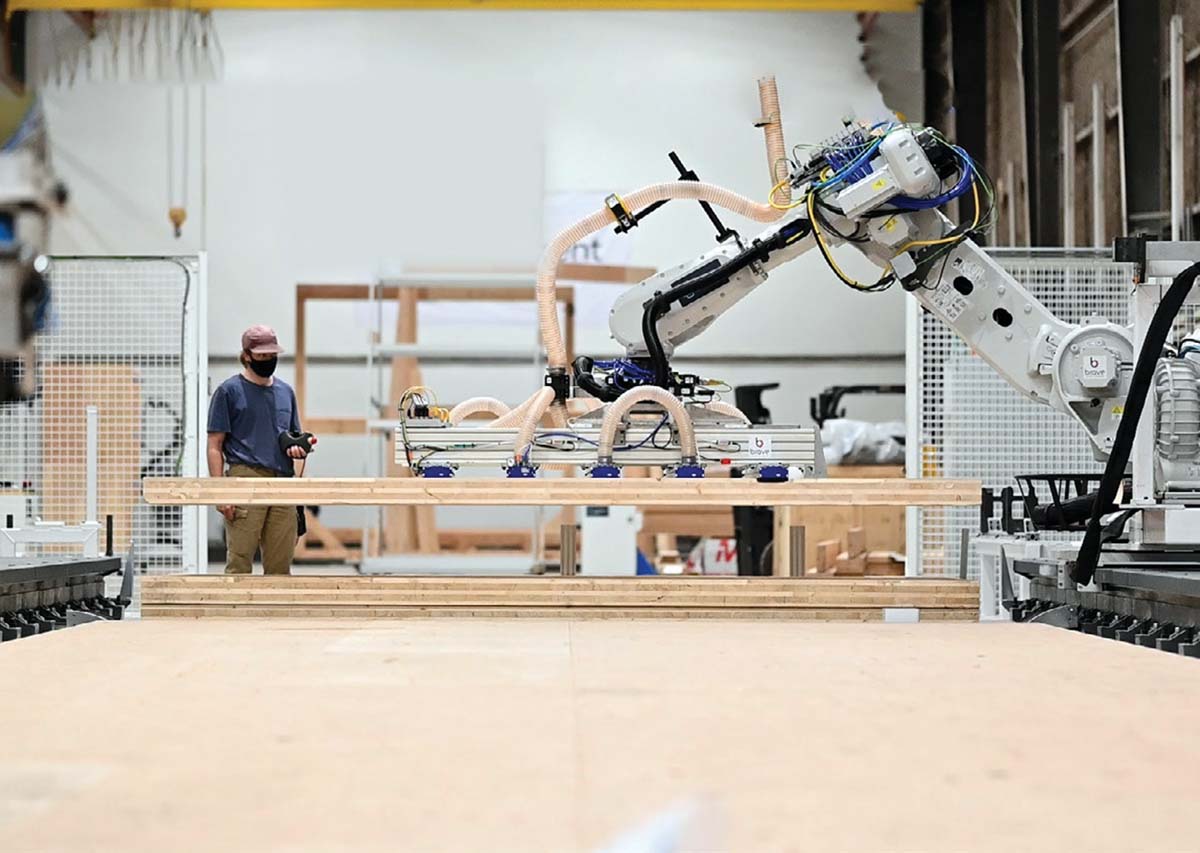 Although it did not receive an award, the jury was interested in the innovative approach advanced by Monad Granville, a rental mid-rise building in Vancouver by LWPAC that also uses modular construction. The firm is developing a manufacturing system that will automate much of the production of the mass timber, passive-house-standard residential units, with the aim to create high-performing apartments at an affordable cost. While the jurors sought more resolution at the unit level, they applauded the arrangement of units around a shared courtyard, allowing for natural light, cross-ventilation, and individual front doors to apartments. “The design creates meaningful spaces on the vertical level, and it seems in tune with the need to build the missing middle,” said juror Carol Phillips.

This year’s awards had a remarkable number of submissions that referenced Indigenous cultures, whether in their clients, programs, names, or other aspects of their design. Among these, the jury singled out A Resilient Duplex for Fort Severn First Nation, by Two Row Architect with KPMB Architects, for recognition as a design rooted in a robust consultation process with its northern Ontario community.

Overall, the jury applauded the growing interest in Indigenous design, but were looking for many of the designs to be pushed further. “I see a lot of projects where something is superficially added to the surface, or there’s a round room,” said juror Alfred Waugh, who leads the architectural firm Formline and who is himself Chipewayan of the Fond du Lac Band. “But I’m looking more for further integration—of maybe a sustainable idea inspired by the cultural past, a material use or organization of space—that informs the design of the building more holistically to capture Indigeneity.”

Odea, a high-rise condo building in Montreal by Lemay in collaboration with Douglas Cardinal Architect, came close to achieving this. The jury remarked on the skill with which it integrated the form of a birchbark canoe into its exterior patterning and volumetric expression, but had hoped to see the concept penetrate past the façades.

In another project, the Saugeen First Nation Visitor Centre & Cultural Centre by Brook McIlroy, the jury was impressed by the use of stone as a primary construction material—a choice predicated on the large number of skilled stonemasons in that particular community.

The jury gave especial care to studying submissions located in complex urban environments. “I have an appreciation for projects that are seeing a concept through, when you know that there are so many influences around them,” said Phillips, whose own portfolio of work at Moriyama & Teshima Architects includes a number of post-secondary education buildings.

The jury recognized several buildings in such contexts, including UBC Gateway by Perkins&Will | Schmidt Hammer Lassen, a university building that elegantly negotiates a complex site at the edge of the campus. Another project recognized by the jury, The Butterfly and FBC (First Baptist Church complex), is an urban high-rise by Revery, whose initial design was led by the late architect Bing Thom. The jury remarked on the residential tower’s open-air breezeways on each floor—a feat to get through building approvals, resulting in an unusually strong connection to the outdoor environment for residents.

Overall, the jury was pleased to see many towers and adaptive reuse projects among the submissions, reflecting the need for higher density in urban environments to be part of the global sustainability discussion. Although they did not award it, they noted how the Barclay Street Tower in Vancouver, by ACDF with IBI Group, included a significant number of social housing units and a solid energy performance, all within a distinctive architectural expression.

Another large-scale project that came close to making the cut, Pigeonhole by Chevalier Morales architectes, took a considered approach to its heritage context in Old Montreal. The architects made a careful study of the surrounding urban fabric to determine the proportions and detailing of its façade. “Contemporary integration into a heritage environment is a complex and delicate issue,” said juror Anne Carrier. “This project offers an interesting reflection on the subject.”

Two projects that were selected for awards relate closely to modern heritage. The New Academic Building at Woodsworth College, by Kongats Architects, deftly adds to a beloved landmark on the University of Toronto’s downtown campus. FARM, by Modern Office of Design + Architecture, alludes to the Quonset hut and similar Prairie agriculture structures, adapted to accommodate commercial needs.

The jury remarked on the large number of school designs from Quebec, and chose to recognize École Val-Martin by Chevalier Morales, which adaptively reuses a big-box grocery store as an elementary school. Juror Anne Carrier, whose eponymous firm is based in Lévis, Quebec, noted how the Quebec government is currently supporting a large program of building and renovating the province’s schools. Inspired by the research of the Université Laval group Schola on the potential to trans­form existing schools, École Val-Martin is a skilful adaptive reuse of a stan­dard commercial building into an attractive primary school that exemplifies the application of new pedagogical thinking in K-12 environments.

The sustainability performance of buildings was also a prime consideration for the jury. This year, Canadian Architect introduced a requirement for entrants to submit energy modelling reports where available, along with key energy performance metrics. These figures were studied closely by the jurors, and several of the buildings they ultimately selected met or exceeded the current benchmark targets available in jurisdictions such as British Columbia and the City of Toronto. This is true of the Toronto Paramedic Services Multifunction Paramedic Station, by Diamond Schmitt Architects with gh3*, whose structural expression is informed by the optimal orientation of a large set of rooftop photovoltaic arrays. Another project, Western North York Community Centre by MJMA, is not only an elegant approach to placemaking in a suburban context, but also targets net-zero energy—a tremendous accomplishment for an aquatic facility, a building type that typically has high energy requirements because of the need to continuously heat swimming pool water.

The jurors were also looking for buildings that had a qualitative connection to the surrounding environment. “Perhaps the biggest tool in our sustainability toolbox is to change the culture, and to have people appreciate the natural environment—then they can take that back to their communities and demand that quality of environment everywhere,” said Phillips. A project that spoke poetically to this approach was The Panda Pavilions, by Atelier Ping Jiang / EID Arch, a Shanghai-based firm led by a Canadian-trained architect. The research and educational facility takes form as a series of ring-shaped buildings that hold the landscape in a protective embrace.

The two selected student projects offer acute observations on the natural environment. For Hemlock House, Odile Lamy of McGill University undertook an in-depth study of a single material, to better understand how its particular characteristics could inform construction. The Mechanical Landscape project by Université Laval’s Tyana Laroche proposed the reuse of offshore oil rigs as food production hubs in a post-oil economy.

This year’s architectural photography submissions also reflected a certain pensive mood. “The photography of architecture is generally at quite a difficult moment, in that there’s so much of it, and it all tends to look the same,” commented juror James Brittain, whose architectural photography practice is based in Montreal and London, UK. “To be successful, a photograph of architecture needs to be thinking about the wider language of how we make images of buildings.” The three entries selected by the jury—L’Actrice (The Actress) by Félix Michaud, Public Safety Building: Permanently Closed  by Jacqueline Young, and Tiny House: The Teenager Edition by Cindy Blažević—do more than to simply capture buildings in a flattering light, but craft a sense of mood that suggests how spaces are constructed, inhabited, and ultimately demolished.

As a group, the winning projects point to a notable shift in architectural culture. While it has long been au courant to speculate on the end of the starchitect era, as the pandemic wanes, it leaves in its wake a decisive move away from the importance of high-profile architects and iconic images, and towards architecture that sees the climate breakdown and social inequity as the most serious issues of our time. Increasingly, there are concerted efforts to posit architecture’s role in addressing these conjoined crises.

Indigenous knowledge, and more broadly, a sense of how we connect to place in meaningful ways, will be key to advancing architecture in this direction. “We have to have a reconciliation in how we live on this earth together, and I think some of the seeds of that solution lay in bringing Indigenous knowledge together with Western knowledge,” says juror Alfred Waugh. “All of us had an Indigenous past at some point, if you go far enough back in history: we all have that interconnection to planet Earth.”

In the Wake of Progress