Three blocks east of Main Street in Vancouver’s Little Mountain neighbourhood, the 480 House project of D’Arcy Jones Architecture (DJA) sits on a gentle incline overlooking the north end of what early settlers called the Tea Swamp. Unlike Vancouver’s tectonically produced Coast Mountains and the landmark-protected Douglas firs of Stanley Park, the Tea Swamp also had its architects—the beavers who turned the area’s creeks into a colony of their own.

Those familiar with the 20-square-block former Tea Swamp will note that there are few structures as old as 480 House. Erected in 1910 on a 25-foot-wide lot, this early vernacular Edwardian house pre-dates first attempts to rid the swamp of its beaver population and drain it of its waters. While the Swamp’s first houses belong more to an early 1920s Cottage style, many were replaced in the 1960s and ’70s with box-like Vancouver Specials. The durability of 480 House owes as much to its relative elevation as it does to its good bones—despite the fact that when it came on the market in the mid-2010s, it had been unheated for 20 years, was infested with rats and had a distinct tilt. The buyers commissioned Jones, who completed the below-the-ground-up transformation in 2016. The following year, Shenila Rajan and David Miller purchased the house and have just completed the final element—the rear shed—following Jones’ plans.

Approaching 480 House from the west, the visitor is treated to a range of similarly styled houses that feature varying degrees of renovation, from a closed-off front porch entrance in one house to a front entrance that has been removed altogether in another. Sharing the block are two modern renovations whose source style is not so much assimilated but erased. Taken together, these renovations provide a prelude to DJA’s artistry: a 1,500-sq.-ft. house that retains not only its source style, but its renovation history as well.

The most notable element is the transformation of the original home’s front porch entrance, a windowless mud room. DJA chose to emphasize its protruding massing, proudly positioning it beside a windowed door leading onto a railed open balcony. As if to off-set the mud room’s boxiness, DJA composed a window scheme whose shapes, scale and distribution engage the box, rather than alienate it.

To make the former basement habitable, DJA had the floor lowered three feet and a water-heated slab poured. Upon opening the north-facing front door is a wooden staircase; to the left, a den/dining/kitchen continuum with a glass window and glass door at the south end. Running down the centre of the exposed-joist nine-foot-high ceiling is a load-bearing metal girder, below which are white wall panel cabinets that conceal cupboards, shelves, refrigerator and a water-closet. A counter runs along the kitchen portion of the east wall, and in the middle, a sink-installed island. Clean, quick, efficient. 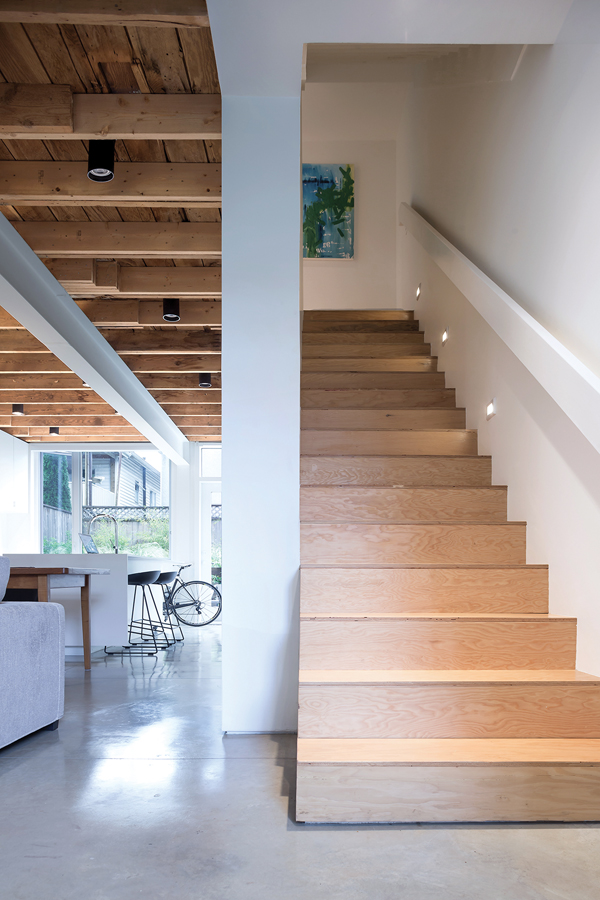 The same could be said of the upper two floors, whose narrow stairs and hallways allow for a spacious office/nursery, a master bedroom with en-suite bathroom and walk-in closet on the second floor, and two smaller bedrooms on the attic floor, each of which share a bathroom with a sky-lit shower. (The adjacent mud room is now, appropriately enough, a laundry room.) Views from all bedrooms look down on front and back gardens that feature native plants: ferns, salal and, as spring arrives, maybe the return of the Swamp’s “Labrador tea” plant, a medicine used by settlers and the Coast Salish people before them.

Over 1000 Canadian and international artists will participate in the Festival featuring over 250 exhibitions and programs throughout May in the greater Toronto area. The work of artists

Over 1000 Canadian and international artists will participate in the Festival featuring over 250 exhibitions and programs throughout May in the greater Toronto area. The work of artists participating in the 2020 Festival expose physical, emotional, and environmental scars that reflect the fragility of our times. Among the artists showing at the Festival for the first time this year are: