Entering the lobby of the Vancouver office of Slack Technologies Inc., I am hard-pressed to sense the presence of a corporate culture. Nested in a 1911 Yaletown warehouse, the four-level workplace more closely resembles some of my favourite local cafés. A unique and unpretentious character (no shopworn hipster tropes like vintage Edison bulbs) and plenty of spots to set up my laptop. Nothing to suggest a global operation with offices in four major cities, whose market valuation recently surpassed $5-billion amid rumours that Amazon and Google are circling the company.

The Slack app, launched in 2013 by Vancouver software prodigy Stewart Butterfield (who also helped develop Flickr) caters to my demographic: tech-savvy, convenience-craving millennials. Quicker and more interactive than email, the app allows electronic messages to be sorted by people, group and topic—separately or all at once. People can quickly jump in and out of conversations, and charming bots sometimes pop up to monitor the talk. Its disciples believe that Slack will soon replace email as the primary mode of online communication; for some offices, it already has. 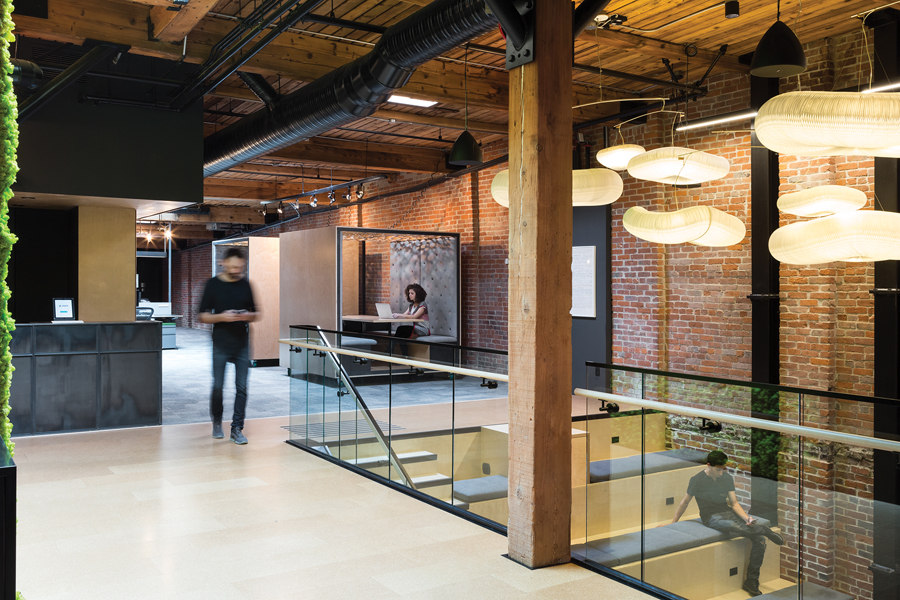 And now Leckie Studio Architecture + Design has transformed Slack’s Vancouver office into an environment that is much like the app: casual, collaborative and user-friendly—made possible by careful attention to the design principles that make that happen. The company’s mission statement —“To make people’s working lives simpler, more pleasant and more productive”—may read like the proverbial corporate bromide, but in this case, it might do just that.

Standing with architect Michael Leckie in the lobby, I behold the space’s defining element: a vibrant eight-foot-high wave of green lichen. The green wave splashes around the wall, visually delineating the work spaces from the social gathering spaces. On one side: the lobby, mobile work alcoves, and a phalanx of open-plan desks. On the other: a spacious café and theatre seating traversing down towards the third floor. Invitingly, the heavy-timber shed roof rises from the work area over the adjacent theatre, reaching nearly triple-height above the speaker’s podium. It is warehouse-edgy, not a logo in sight. “They didn’t want the space to feel branded with their logo colours,” says Leckie.  Those colours, displayed in Slack stylized hashtag logo, are what I would describe as millennial plaid: faded pastels that criss-cross, bleed and blur into one another—in contrast of the bright saturated colours that have been corporate standard of logos past.

But Slack’s office/hot-desk/employee café conveys a product ahead of the corporate curve. The millennial plaid company colours are not visible anywhere, allowing the place to assume its own non-corporate identity that communicates its product better than any logo could.

In homage to materials available at the building’s origins as a rum-running warehouse during prohibition, Leckie has incorporated raw steel, charcoal, plywood, cork, buttons, and burlap across the four floors of the building. Each button on the upholstery is unique. “We used six different sizes, shapes, and species of wood buttons and three different colours of thread,” says Leckie. “The contractor actually requested that we lay out each individual button type and location.” 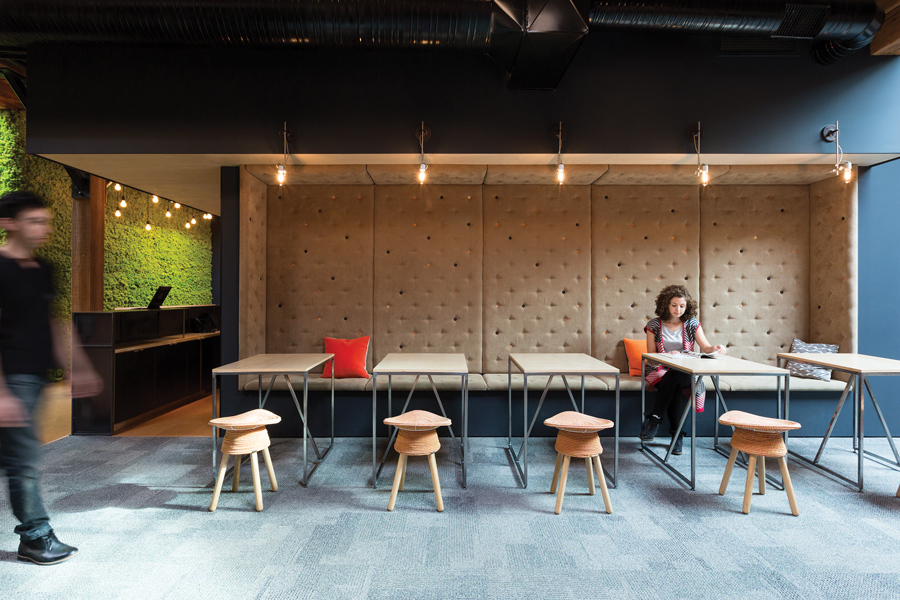 The office, like the app, feels more egalitarian than is customary in a corporate workplace: the absence of an overt sense of brand is refreshing, allowing the rooms to comfortably fluctuate between casual and professional. Every area in the four-flour workplace has its own ambience, a different seating option, choices of small or medium or large meeting rooms, open or sealed like boxcars. The use of inexpensive materials, such as single-sided domestic plywood, suggests a rejection of material luxury. The spaces are flexible, accommodating the shifting needs between individual and work group compositions. There are gender-neutral washrooms. Although this is the itinerant CEO’s home office, he sits in an unremarkable desk in the middle of the fourth-floor work-station area, or amid the product and design engineering teams. 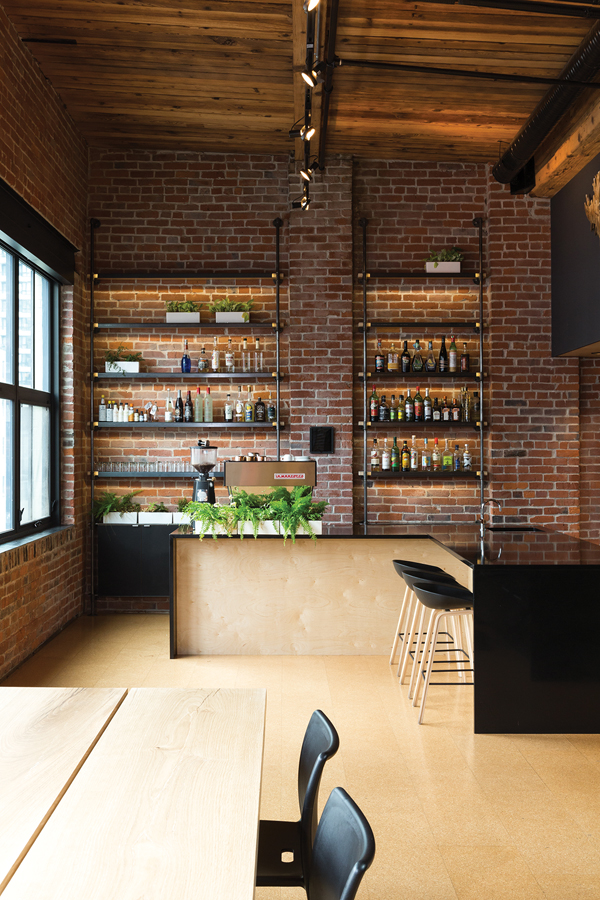 Inserted as a reverse mezzanine, the theatre serves as a stairway between the top two floors. Movie nights, video games, and lectures are hosted from this venue. A hole had to be cut out of the fourth floor to fit the tiered seating in; remarkably, Slack (on a seven-year lease) got permission from the building owners to amputate some of their leaseable square feet. A scar remains in the form of a void in the middle of the century-old heavy timber crossbeam. The felled beam segment, evicted to the employee lounge [correct?] below, now works its new job as a massive coffee table.

“What I learned about Slack over two years of working with them set the tone for things I’ve implemented philosophically in my own architecture practice,” says Leckie. “A lot of the people have said our practice feels much more like a tech startup than a traditional architecture office.” Not just the process, but the app itself has informed Leckie’s studio. “It’s an essential part of our architecture practice. We have Slack teams with our clients, with Slack itself, and for all the projects we do. The constant dialogue really supports collaborative work.” Leckie’s own office never uses group email in their design teams anymore; it’s too dull and unwieldy.

I ask about the lichen. It’s not your traditional living wall system. In fact, it’s not even living—technically speaking. “It’s been fixed,” confirms Leckie; the living tissue of the lichen is eternally preserved with glycerin.  The team had originally explored the possibility of a “living” wall of greenery, but practicalities of daylighting, irrigation, drainage, and other requirements sunk that prospect early on. The fixed lichen may not purify the air, but it avoids the eco-fallacy conveyed by many a Vancouver green wall or roof, festooned with living vegetation but often with no real environmental benefit. But the wall does offer a visual reprieve —“abstracted nature,” as Leckie puts it. “Here we have a natural material used in an architectural way.” The “cloud softlight” pendant lighting by Molo Design further extends what Leckie describes as “the idea and space and feel of nature.”

Slack Vancouver remains within the office typology, but has smoothed out some of the bugs and offers its workforce a kind of humanized “office 2.0” to work in. It will be worth watching both Leckie Studio and Slack Inc. to see what will get transformed in their version of office 2.1, the next patch.