Closing out the year, new inductees to the Order of Canada were announced on December 29th. Acclaimed landscape architect Cornelia Hahn Oberlander was one of only four recipients of the rank of Companion of the Order of Canada, representing the highest possible achievement within the Order. Oberlander — who was promoted from the rank of Officer, which she attained in 2009 — was joined as a Companion by Thomas Cromwell, Frank C. Hawthorne, and Louis Lebel. Oberlander was cited “[f]or her long-standing contributions to the field of architecture as a worldwide leader in promoting socially conscious and environmentally responsible landscape designs.” 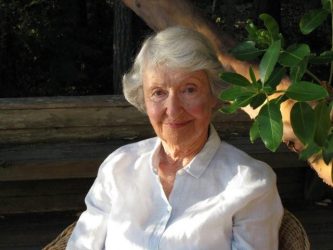 A winner of the inaugural Governor General’s Medal for Landscape Architecture in 2016, Oberlander is the recipient of numerous important awards and has led the landscape architecture community both nationally and internationally throughout her career. She is a respected teacher and has published many books and articles. She continues to create a body of work rooted in building places and policy that supports an intimate and beautiful connection with the natural world. Many ground-breaking ideas, such as the importance of exposure to nature and the creation of opportunities for social interaction, formed the foundation of her design philosophy decades ago. She has played a seminal role in the evolution of modernism in the context of architecture, landscape architecture, and planning. Ms. Hahn Oberlander is a champion and continual advocate for landscape architecture, a teacher, and is considered a leader by several generations of landscape architects in Canada and abroad.

Order of Canada list announced: A guide to who’s being honoured https://t.co/GP9T1lOgFG

In the architectural sphere, Oberlander was joined by new Order of Canada recipients Richard Henriquez and Gregory Smallenberg, who were named Members of the Order. PFS Studio’s Smallenberg was celebrated “[f]or contributing to the urban fabric of Canada as an influential landscape architect,” while Henriquez — of Henriquez Partners Architects — was similarly recognized “[f]or his contributions to Canadian architecture, notably in shaping Vancouver’s urban landscape.”