From the street, it’s a quietly assertive presence. A glass box rests demurely above a stately Victorian home, while the rest of the building unfolds horizontally in a quilted interplay of brick, stone and glass. You enter from a small door nestled behind the Jarvis Street mansion and behold the reception desk tucked to the side and, before you, a lobby overlooking the verdant courtyard at the building’s heart. Here, a stone fireplace sits at the foot of a limestone wall that anchors the space, which reaches up to the second floor to take in light from the windows above. It feels more like a living room than a lobby, which is fitting for a place meant to feel more like a home than a hospital. This is Casey House.

Founded in 1988, the Toronto institution is the only hospital of its kind in the world. Dedicated solely to people with HIV/AIDS, the facility is devoted to what remains a stigmatized illness, one which disproportionately afflicts some of the most marginalized and vulnerable members of the population. Thirty years ago, it was a place to die. The first patient was brought in by a medical team whose members wore gowns, gloves and masks; he hadn’t felt the direct physical touch of another person in months. At Casey House, he was met with an embrace.

In the ensuing decades, the treatment and prognosis of HIV/AIDS has improved drastically, becoming a condition to live with rather than a disease to die from. All the while, the notion of “embrace” has remained the Casey House ethos. Although the new home on Jarvis Street sits just across the street from the house that founder June Callwood first transformed into a hospital in 1988, the patient experience is a very different one. The warmth and openness that has always been present in the staff and community is now expressed by the building itself.

The 1875 house, which had been designed by the Toronto firm Langley, Langley & Burke, was stately but decrepit, colloquially known as the “Grey Lady” when it was purchased by the Casey House foundation in 2001. Now restored to its original red brick and sandstone, by local heritage specialists ERA Architects, the building projects a meaningful streetfront presence.

Past the lobby, a pair of hallways flank either side of the courtyard, whose glass walls illuminate the length of the interior. This simple gesture sets the building apart from most contemporary healthcare facilities, which continue to favour the stark fluorescent efficiency of double-loaded corridors, creating interstitial spaces that serve only to shuttle clients (the preferred term for outpatients at Casey House) and staff through the hospital. Not here. On the ground floor, the corridor deftly merges into the main dining room, which looks out onto both the playfully articulated courtyard and the street. Upstairs, the sunlit corridors resolve at another social space, programmed as a flexible hybrid of kitchen and breakfast/television room. Uninterrupted sightlines down the corridors generate a horizontal sense of openness, but at a human scale that provides a sense of comfort.

All of it feels welcoming: spaces of quiet and airy beauty. Touring the joint, I find myself tempted to linger, sit down, find a cup of coffee.

For Casey House CEO Joanne Simons, that feeling of caring and welcome inform much of the building’s character. In 2018, successfully treating HIV/AIDS is as much about what Simons calls “the social determinants of health” as it is about prescribing the right cocktail of drugs, she tells me. Although recent medical advances enable very effective management of HIV/AIDS, the socio-economic circumstances of many clients make successful treatment difficult.

“About a fifth of our clients are homeless,” notes Simons, “and many more struggle with unstable of insufficient housing.” Even in 2018, people with HIV/AIDS continue to be stigmatized. Many come from marginalized communities, while dealing with other chronic illnesses and struggling with addiction, while about half of the clients are also over 50 years of age. “People are often in crisis when they come to us,” says Simons.

For clients, maintaining a consistent medical regimen requires a baseline of stability, which the hospital strives to nurture. It also requires bonds of trust and comfort between clients and staff, which are not always easy to seal with individuals who have been pushed to the margins of society. Casey House needs to be more than just a hospital—and it is. By hosting movie nights, art therapy, cooking classes, book club, coffee hour, bingo and yoga, Casey House aims to knit together a social fabric that fosters health and wellness. “Oftentimes, it’s those casual events that bring people in for the first time,” says Simons, “and they help to close that boundary.”

Here, the architecture plays a key role. In creating spaces that are welcoming and familiar, the design transcends the uncomfortable boundary between the ordinary and the institutional. The profusion of greenery — including a rooftop garden — light, and open space makes for an inviting healthcare environment.

The warm material palette of wood and rough-cut stone does much to inspire a sense of comfort, but because of the strict sanitary requirements of healthcare facilities, these relatively porous (and therefore germ-harbouring) materials are rarely used in conventional healthcare facilities, whose designs consequently lack a sense of texture. Extensively coated, however, the walnut and limestone meet all of the Ministry of Health’s requirements. “It was a hell of a challenge to get it right,” says Hariri. The results are worth it.

For Hariri, this is familiar territory, which he consistently refines in his projects. A similar material interplay, complete with the fireplace in the lobby, is found in his design for the Richard Ivey School of Business in London, Ontario; in the McKinsey & Company Toronto headquarters, and in the recently completed Jackman Law School at the University of Toronto. All of these projects imbue diverse typologies with the intimacy of the home. A willingness to sweat the details also elevates the design and the corresponding function.

On the upper floor, the bedrooms, examination rooms, offices, and recreational spaces all have windows. Patient rooms are designed so that laundry and waste can be compartmentalized and removed without disturbing clients. Similarly, medical consoles can be hidden away behind a wood panel above each bed, putting away the hospital in favour of everyday life. On the ground floor, the dining room’s exposure to the street is carefully mediated by landscaping and topography, balancing openness with privacy.

“We’re coming out of the shadows of shame,” Simons explains as we pass from the contemporary addition into the 1875 heritage home. Although a more declarative identity was sought with the new building, the continued stigma faced by HIV/AIDS patients means that restraint and privacy are still very much part of the vocabulary. As such, the design often deals in poignant subtleties. 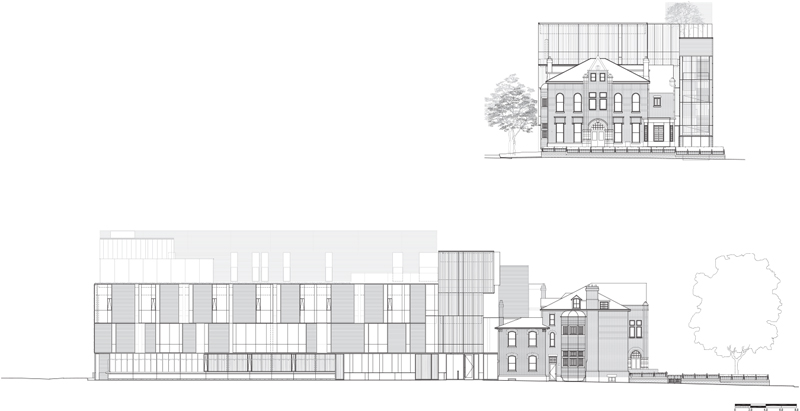 Outside, the pattern of Hariri’s new façade references the quilt, a popular memorial symbol of the disease. Inside, Simons takes me to the front of the old house, past a stunning restored barrel-vaulted ceiling, to a simple foyer with a desk and a candle by the window. “This is June Callwood’s desk,” she says, “and whenever a member of our community dies, we light the candle.” In the evening, you can see it from outside, she explains, and I feel my heart catch in my throat as she does. There is no grand design gesture in this small space, and there needn’t be. Instead, the language of restraint allows the desk its rightful and devastating symbolic power.

All of this speaks to just how very different this place is from a traditional hospital.

In the 21st century, the claim of designing a healthcare facility that “doesn’t look like a hospital” is ubiquitous, and often shallow. We build them bigger than ever, favouring suburban sites and bulky footprints that too often give little regard to the human scale and the pedestrian experience. Lazy bureaucratic paeans to the patient experience result in little more than big atrium lobbies and occasional splashes of solid colours across taupe walls. Casey House shows another way of doing things. 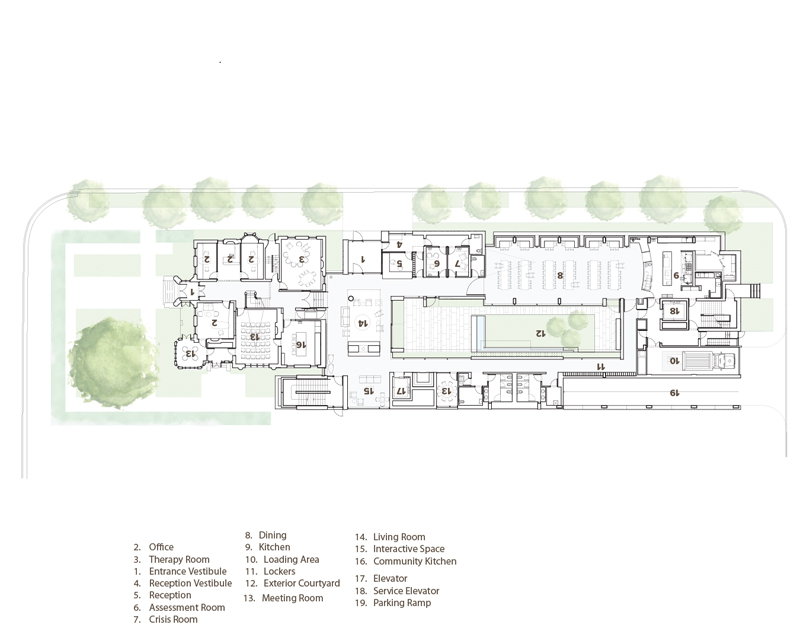 But if HIV/AIDS treatment continues to progress, perhaps we’ll reach a point where we don’t need even need such a hospital. “Hopefully, we go out of business,” says Simons, stressing that the eradication of new HIV/AIDS infections could take place within the next decade. But if the hospital is lucky enough to soon become obsolete, we ought to hope the building remains much longer. If only as a reminder that architecture itself can help heal the body and, however briefly, lift the heart.

Photos by Doublespace Photography.
Stefan Novakovic is the Assistant Editor of Canadian Architect.