Up In The Valley: Columbia Valley Centre, Invermere, British Columbia

Roadways and railways carve long, sharp cuts through the vast Canadian landscape and are often the only mark of modern human occupation. For Vancouver-based Shape Architecture, working with Calgary-based Hindle Architects, a sliver of such infrastructure would serve as the conceptual touchstone throughout their design process for the Columbia Valley Centre in Invermere, British Columbia. A compact rusty-steel rail bridge just south of town echoes the hard line of the new building; both bridge and building presents a counterpoint in colour and form to the fortified mountains beyond. 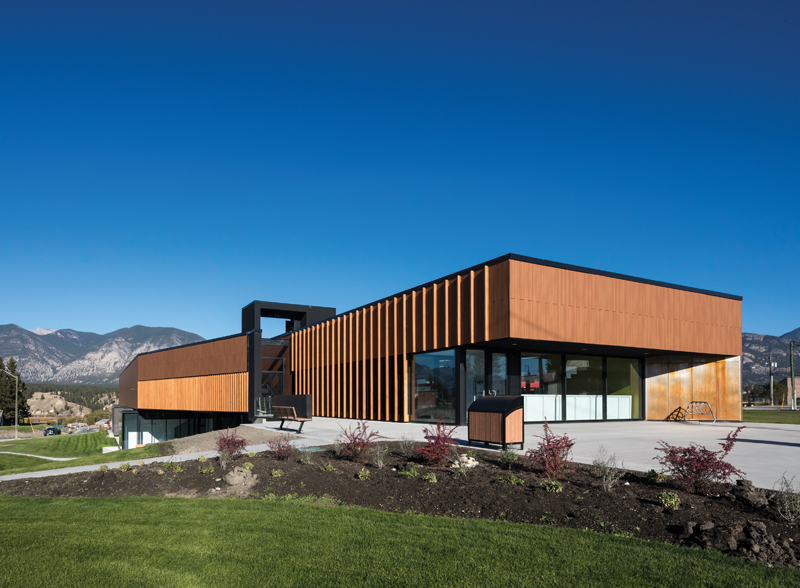 Opened in the fall of 2017, the Columbia Valley Centre is an 1,672- square-metre multi-purpose hall and library for a district of roughly 3,000 people nestled between the Rocky and Purcell Mountains in the East Kootenays, 100 kilometres west of the Alberta border. The Centre replaces an aging community hall on a new site. Since 1947, the old hall had hosted theatre productions, weddings, ski swaps, Christmas concerts and craft fairs. It was long loved and well worn, lately suffering from structural problems and a failing roof. Practically, it offered little more than a heated room and a stage. A new hall would have to do much more. As one of the largest public buildings ever undertaken in Inver- mere, the Centre needed to function both as a resource for the local community and as a magnet for larger regional conferences and events.

The Centre has also become a benchmark for Shape Architecture, which, since its founding in 2007, has quietly built up a portfolio of community and recreation work across British Columbia. Beginning with the tiny renovation of the Pender Harbour Aquatic Centre, Shape has now completed nine municipal buildings of increasing scale, including the North Delta Recreation Centre and others in Surrey, Burnaby, and North Vancouver. Most have been renovations of additions to exist- ing buildings. The Columbia Valley Centre is one of Shape’s first standalone community building and exhibits some of the firm’s most finely wrought and fully realized work in this type. This accomplishment, in joint venture with Hindle Architect was recognized with a 2018 AIBC Lieutenant Governor Medal of Excellence. 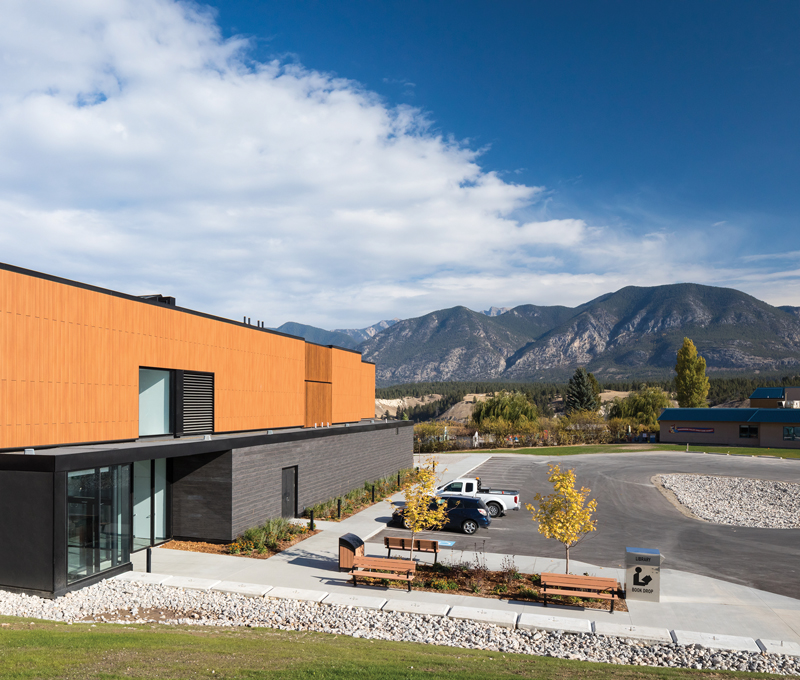 Designing community facilities requires managing high social aspirations within tight budget constraints. Spaces have to be comfortable but bulletproof, flexible yet specific, in other words, esoteric architectural ideas about rusty rail bridges can easily fall by the wayside. Shape succeeds in delivering a coherent and generous piece of architecture in Invermere. This is a building that is modern and yet rooted in place, a contemporary form that draws specificity through its siting and formal expression. 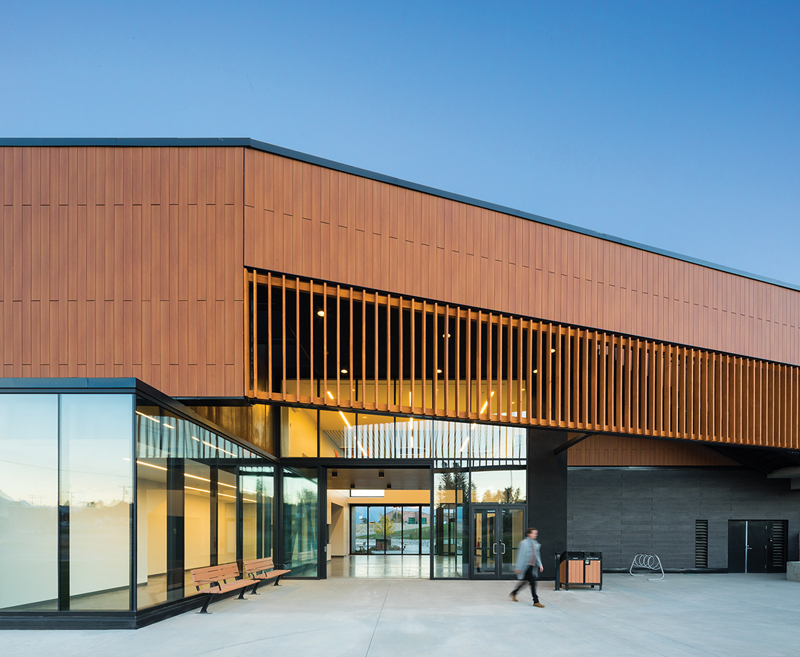 From the rail bridge, a logical linear plan evolved with a library at one end and multipurpose hall at the other, the lobby holds them together in the middle. A commercial kitchen, storage, and offices surround three sides of the hall. A bank of washrooms is tucked into a berm underneath the library and a roof deck takes in sweeping mountain views from above. The scheme makes clever use of both landscape and building form to manage the jump in scale between the hall and library.

In plan, the west building skin is tweaked and stretched to connect a corner of the small single-storey library to that of the large double- height hall. Here, timber fins pull away from the envelope to create a deep sun shade and a covered west entry court. In section, the library sits on top of a berm, its narrow volume extends northward and, as the ground falls away to reveal a dark lower volume, the articulated upper floor appears to reach out across the site. 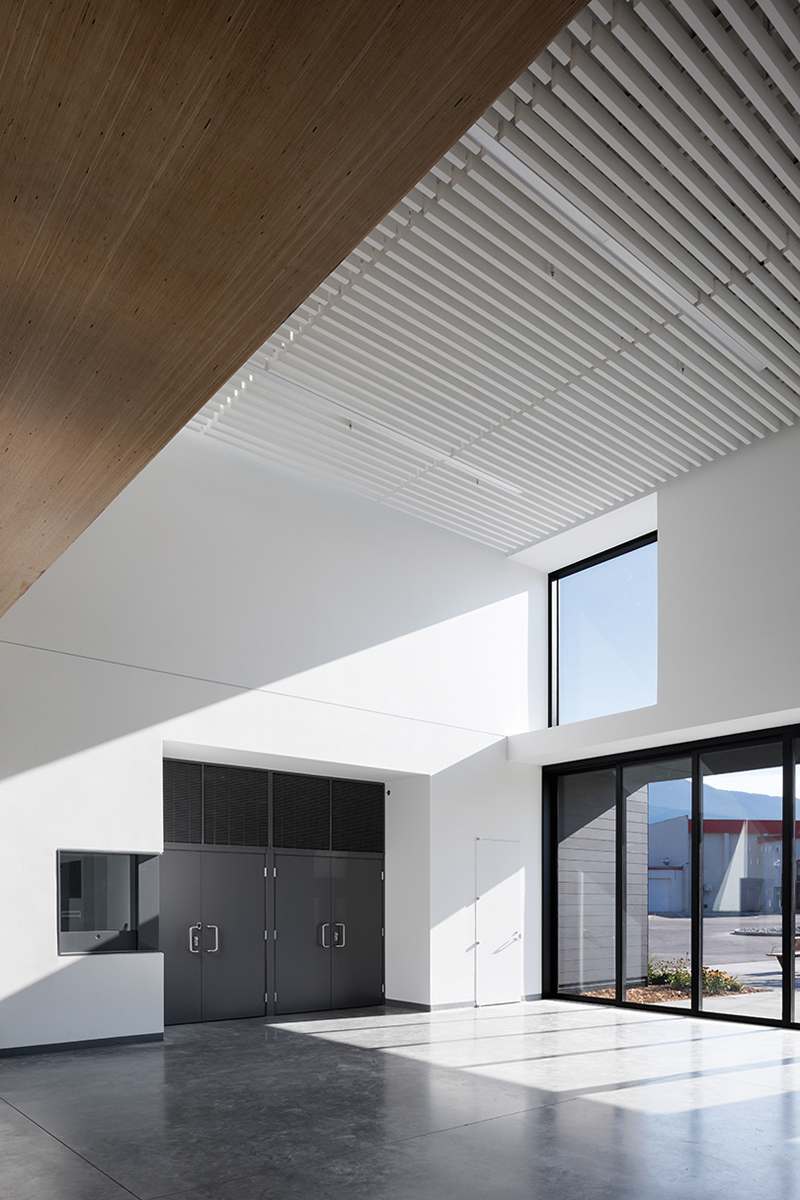 While a simple building, the designers employed plenty of invention through the procession and interplay between spaces and the modulation of light and views. The lobby forms the heart of the building. From an easy circulation f low down the stairs from the library to the large skylight that washes the doors of the main hall with light, it’s apparent that much care was taken in the design of this space. Functionally, the lobby acts as a plenum receiving exhaust air from the flanking hall and library. Opening large sliding glass doors naturally ventilates the building through an active fan at the roof. 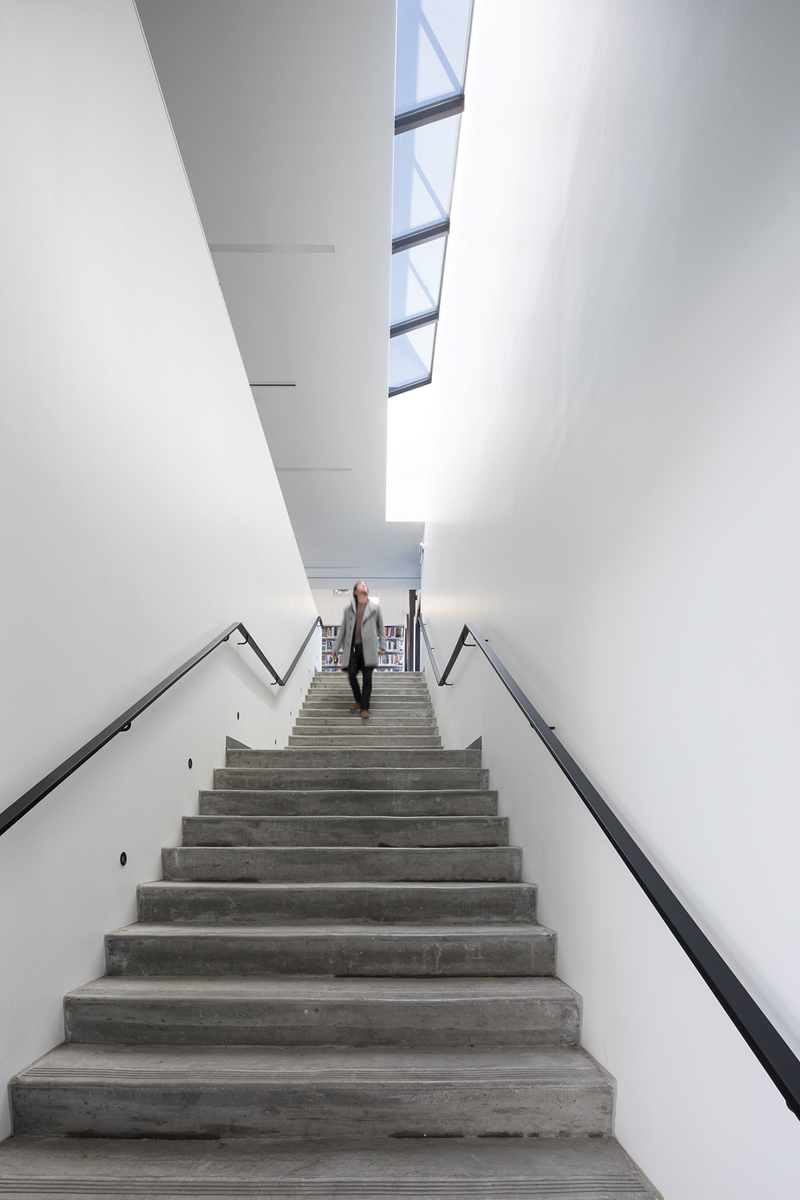 Deft large-scale planning and the thoughtful resolution of details helps the project prevail against some unfortunate material decisions. At the best of times, given a half-decent budget and a game client, it can be difficult to realize poetic architectural ideas. Public clients can be laser-focused on the practicalities of building management, on eliminating unknowns and minimizing risk in an attempt to deliver the mythic no-maintenance building. At the beginning, the designers pro- posed a cedar cladding set off by fiery feature walls of weathered steel set on top of a char blackened base. In the end, the cedar was replaced with an orange-brown resin panel printed with the image of wood. The blackened base is finished in the same resin panel printed in grey.

These are pale substitutes for natural materials and less forgiving at the detail level. Where vertical wood fins intersect the resin panel, a fussy trim piece is fit on either side of each fin to conceal the joint. Corten accent walls are overwhelmed by the plastic sheen of the panels.

Cladding quibbles aside, this is an accomplished small building in its overall form, the generosity of spaces and its subtle programmatic sup- port. The flexible hall is stocked with just enough specific infrastructure to facilitate its transformation between a judo dojo, banquet hall and performance space. There are movable dividers and a large-scale theatrical curtain system that swings out to form a stage. Retractable theatre seating and a professional A/V booth complete the package. Even the library might easily transition easily into a youth centre, arts organization or cafe sometime in the future.

Whatever the next 70 years brings to Invermere, the Columbia Valley Centre is poised to absorb it. For Shape, the project advances their standing among the ranks of Canadian firms making good architecture from humble beginnings.

Courtney Healey is an architect and writer based in Vancouver.

Ahead of the Curve: Shane Home YMCA at Rocky Ridge, Calgary, Alberta