The City of Mississauga is providing a new park and community centre as part of the overall Ninth Line Lands development between Highway 403 and 401. The project will serve this urban densification along the City’s western boundary, along a tributary of 16-mile creek, with a recreation centre and a 50-acre park. A fitness trail system around the park will connect with a series of new and existing pedestrian trails extending into the city fabric. The site will be a destination point in this system.

The community centre will be a focal point within the site with light-permeable cladding encasing a leisure and lap pool, triple gymnasium and multi-purpose rooms. For preferred solar orientation, the elemental form and the sports field face each cardinal direction. Reclaimed topsoil has been used to create a new topography on this relatively flat former agricultural field. These small rolling hills are situated at the edges of the sports fields and the central green lawn to create informal seating and destination points within the site.

The building appears as a simple form within the landscape, but reveals a heavy timber structure beneath its expanded metal mesh envelope and a complex internal ceiling of forms used to control light and sound. 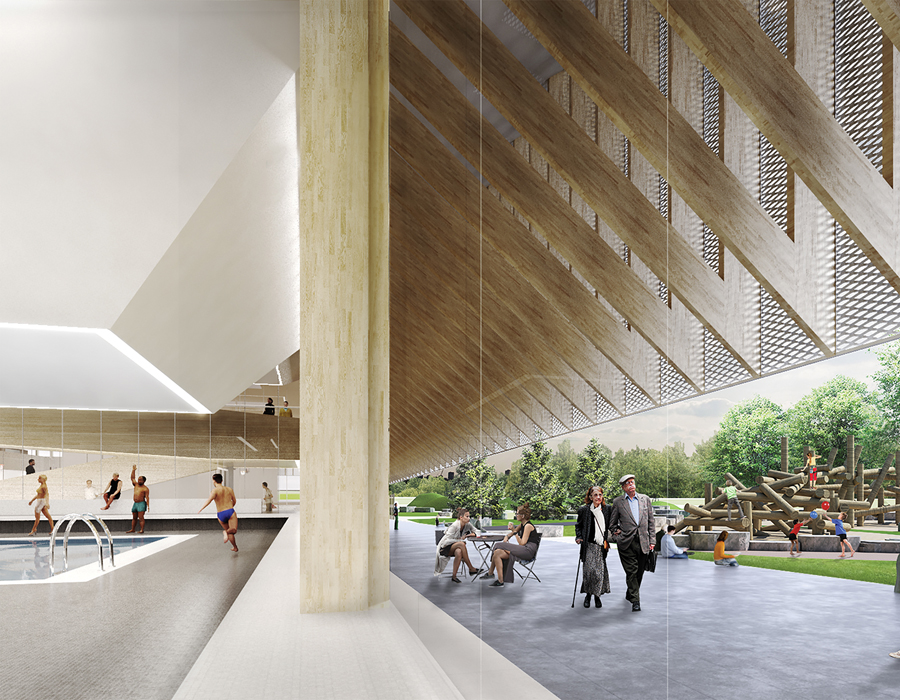 A change room and service bar flank the pool and gymnasium, which are fully glazed towards the amenity spaces. The change room corridors are glazed so that some of the internal workings of the community centre are visible to those arriving at the facility. The building’s overhangs provide covered connections and act as shade structures for the adjacent playground and splash pad, as well as covered bicycle parking and a dry walking track around the building. 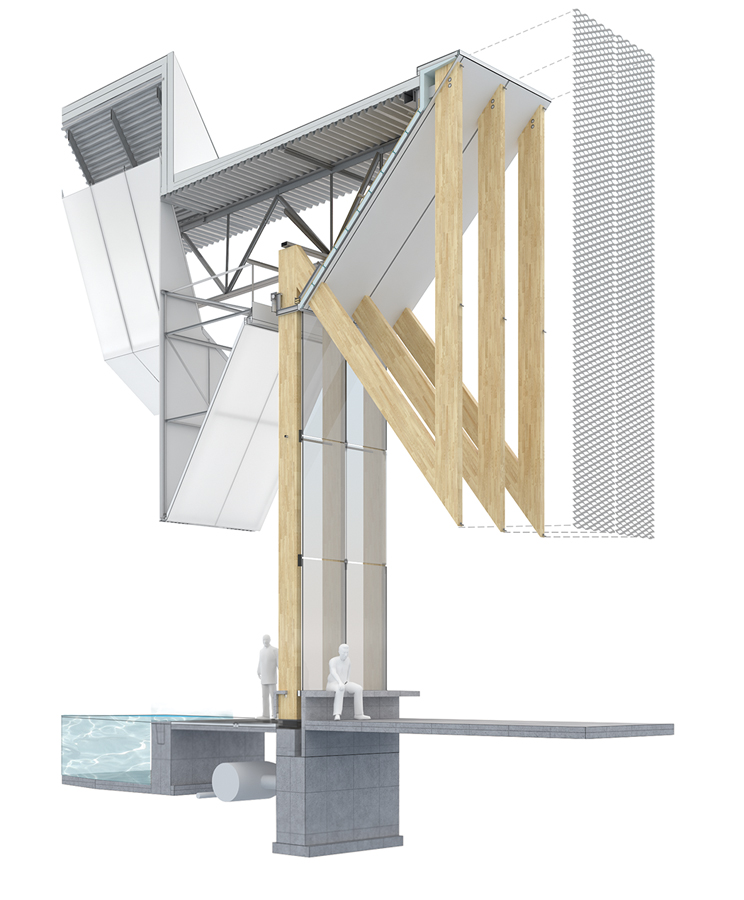 A series of activities have been grouped together under an undulating ceiling. The gym, lobby and pool have been covered by a stretched membrane assembly shaped to reflect and absorb both sound and natural light. These inverted peaks form continuous loops over each pool, the lobby and the gym courts. They are lined with LED light fixtures highlighting the spaces within the space. Micro perforations in the membrane ceiling let sound pass through to acoustic insulation. Natural light drops into the space from a series of skylights above, reflecting off the membrane ceiling. The aim, beyond the practical function of eliminating glare and excess heat gain, is to provide more enigmatic space with this slightly subtle source of light, like a lit cavern of some sort.

The gym, lobby and pool are wrapped with glulam framing, which extends outwards to form a deep overhang and is clad in expanded aluminum mesh which permits filtered light through to the building. Glazing units connect directly to the glulam columns by means of a toggle system set between the light and directly fastened to the glulam columns. The result is a robust wood structure clad in a very simple glazed curtain. 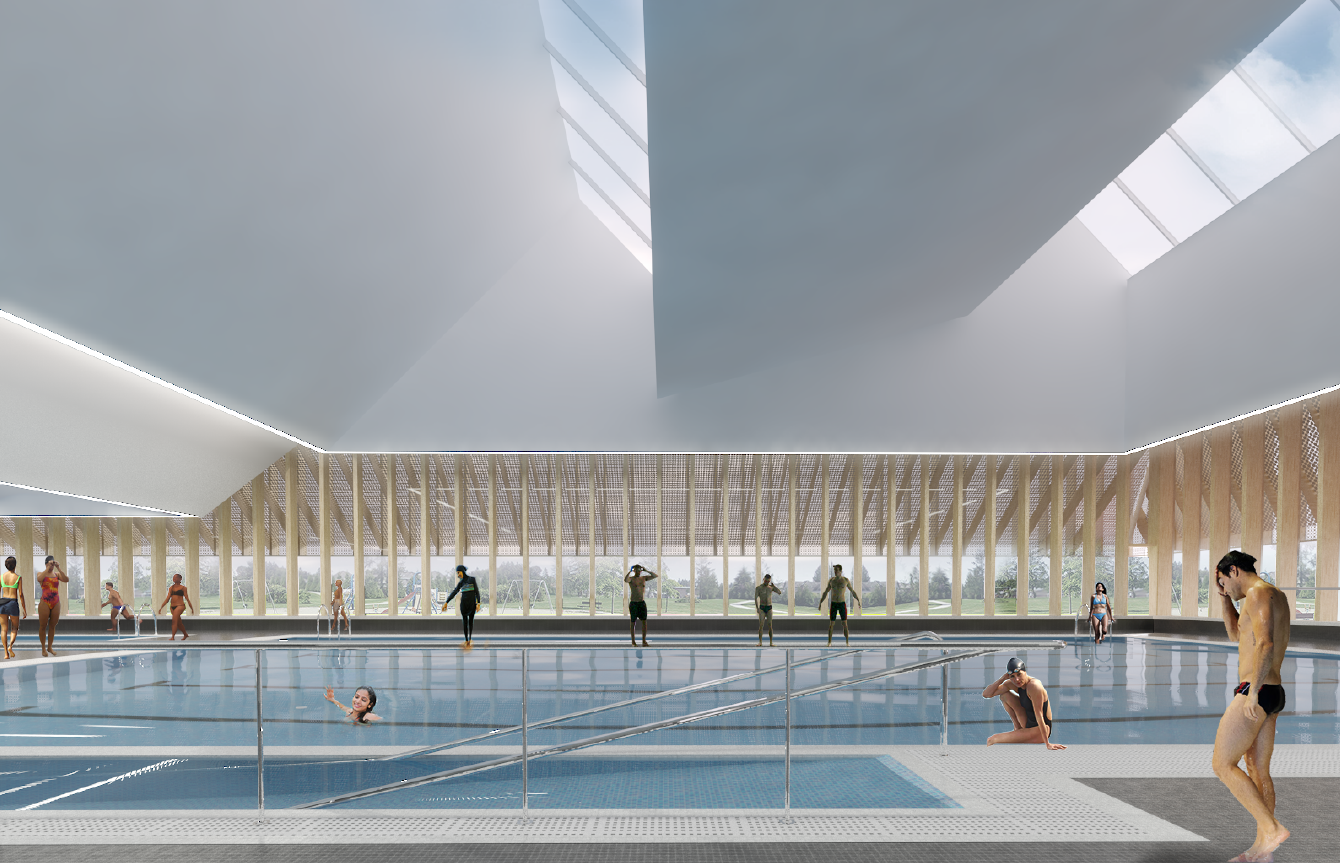 Shirley Blumberg :: Simple and bold, this project delivers a great amenity for its community. It is very accomplished.

Steve McFarlane :: The simple plan deploys the program quite succinctly, freeing up other resources to artfully modulate daylighting and views. Simple gestures in the section create spatial variety and richness with modest means.