A new facility for York University's Schulich School of Business makes the compelling argument that great environmental performance can go hand in hand with great architecture.

“A great-performing piece of architecture can also be a great piece of architecture.” The architect Jon Neuert learned this principle from the late Barry Sampson, his partner at Toronto-based Baird Sampson Neuert Architects. He repeats it to me as we stand outside a project that embodies the ideal: The Rob and Cheryl McEwen Graduate Study & Research Building at York University’s Schulich School of Business.

Completed by Baird Sampson Neuert just before the pandemic, the structure delivers remarkable energy performance along with spaces conducive to socializing and collaborative work. “The fundamental idea of the building,” Neuert says, “was to intertwine sociability and environmental sustainability into an integrated whole.”

It delivers, through an architecture that is thoughtful and remarkably self-effacing. The 6,100-square-metre building is essentially V-shaped in plan, clad with Algonquin limestone at ground level and cement board above. One wing looks north to the York campus’s main street, and the other southeast to a woodlot; between is a courtyard. At the vertex stands a three-storey atrium, capped by the project’s visual centerpiece: a 16-metre solar chimney, made from a slab of concrete encapsulated by a rectangular glass prism.

This has the visual presence of a Victorian chimney or a futurist smokestack—but rather than emit pollutants, it serves to eliminate them. It acts as the lungs for a natural-ventilation system which should keep the building’s energy use and carbon emissions very low. The McEwen Building is designed to use just 72.4 kWh per square metre—about one-fifth below the Canadian Energy Code—and generate about one-third of the carbon emissions of this standard, thanks to integration with York’s central plant system. The potential inclusion of a geothermal borefield and future rooftop photovoltaic panels would bring the building’s carbon emissions to net zero.

To achieve this result, the architects adopted a “whole building approach,” collaborating with German climate engineers Transsolar on the design of the architecture and building systems. They created an automated climate-control system that integrates natural ventilation with radiant heating and cooling. When natural ventilation is not possible, the building’s air handling system is used only to provide tempered fresh air rather than temperature control, enabling for smaller air-handling units, much less ductwork and increased energy efficiency compared to a conventional building.

The McEwen Building has a built-in weather station on its roof, which sends data to the building’s control system, including controls for the solar chimney and operable windows. This system enables enhanced rates of natural ventilation for much of the year.

In natural ventilation mode, the solar chimney opens using rack-and-pinion systems adapted from greenhouses, which activate glazed dampers at the top and base of the chimney. Then the stack effect causes warm air to rise through the chimney, drawing out the air from the central social hub and adjoining corridors below. The negative pressure created by the chimney draws fresh outside air into the building through operable windows located in each occupied space. Air passively cascades into adjoining circulation areas through transfer ducts, and is ultimately expelled through the solar chimney.

In Toronto’s climate, simply opening the windows often doesn’t suffice because it is either too hot or too cold. The McEwen Building’s systems are more subtle. During suitable outdoor conditions, the building automation system opens the windows and solar chimney to carefully calibrated distances, to maximize fresh air and maintain comfortable interior conditions.

The chimney serves a second function in winter, when the building operates in mechanical ventilation mode. Then, a lower glass layer closes to create a solar pre-heat chamber within the chimney; exterior air passes through here, is warmed by the sun, and then circulated through the building.

In the summer, the structure’s thermal mass and green roofs help to keep the interior cool. Passive cooling through natural ventilation is able to meet much of the shoulder seasons’ cooling needs.

I visit on a rainy, 30-degree summer day, and the chimney and windows are closed against the rain and humid air. The building also has some of its mechanical systems shut down, as they had been for much of the year while students and staff were kept away by the pandemic (typically, in such conditions, the building’s active cooling system would be running). As I stand in the atrium with Neuert and project architect Jesse Dormody, a Baird Sampson Neuert associate, the air feels slightly close, but still fresh. The building allows for an unusually high rate of air exchange when it is in mechanical ventilation mode, modulating based on occupancy levels, and double that in natural ventilation mode.

Strikingly, the grand space of the atrium is utterly quiet. The hiss and buzz of fans and air-conditioners is ubiquitous in our daily lives. A room that is quiet—actually quiet—feels uncanny.

This is no accident. Aside from the skillfully deploying the magic of natural ventilation, the architects put considerable effort into the acoustics of the building. Acoustic radiant panels line several facets of the atrium and other rooms, their perforated steel surface absorbing sound while piping behind circulates a liquid for radiant heating and cooling.

The Schulich school is highly regarded for its specialization in the field of business and sustainability and, Neuert says, they brought a similar interest to the project. “They were committed to the idea that the building would embody the values of the school.”

Indeed, Schulich associate dean James McKellar, who served as the faculty’s client rep, notes that the facility’s energy performance is a real point of pride—as is the haptic and aural comfort of the place. “We believed that, through architecture, we could communicate things that could not be conveyed through writing and policy statements,” he says. Sustainability and sociability, he suggests, are in the air.

It’s hard to evaluate the truth of that claim while a building is empty. But the McEwen project seems likely to deliver. McKellar (who trained in architecture) sought for the building to include qualities that are fundamental to human comfort, including natural light for every occupant and, presciently, exceptional air quality. In the several months that it was open before the pandemic, students and staff commented on how good it felt to be in the building. “This is home for the people who come here,” said McKellar. “We [couldn’t] get people out of the building. They [were] here sometimes until 2 o’clock in the morning.”

During our tour, Neuert and Dormody join me in a small breakout room. An oak-framed glass partition separates us from the adjacent daylit corridor. Once again, the room has not a hint of mechanical sound.

The trick here, again, is the strategic use of displacement ventilation. Fresh air is entering, slowly and silently, at ground level. Up above us, behind an oak grille, the entire ceiling is lined with a set of broad U-shaped air ducts, each one padded with acoustic insulation. These noiselessly carry warm air out of the room.

On the second and third floors, looping corridors carry people and exhaust air from faculty offices and seminar rooms. These spaces have moderately sized windows—located based on detailed airflow calculations—with exterior horizontal sunshades above eye level. The envelope as a whole is just 39 percent glazed, meeting the 40 percent requirement of the Ontario Building Code’s prescriptive path for energy performance—yet light levels are comfortable throughout. This preponderance of well-insulated solid walls, along with triple-glazing throughout, also contributes to the building’s low energy footprint.

Ultimately (and correctly), individual perceptions of comfort prevail: in all spaces except for the circulation areas, atrium and lounges, occupants can override the building systems and open or close the windows to suit how they feel.

There is an interesting comparison point for the McEwen Building right next door: the Schulich School’s main building, designed by Siamak Hariri of Hariri Pontarini Architects, which won a Governor General’s Medal in 2006.

As we walk through a second-floor office of the McEwen Building, Dormody points out how its cladding echoes the beige colouring and syncopated-square articulation of the existing building’s façade. But rather than honed limestone, the McEwen Building employs lightweight fibre-reinforced cement-board panels. 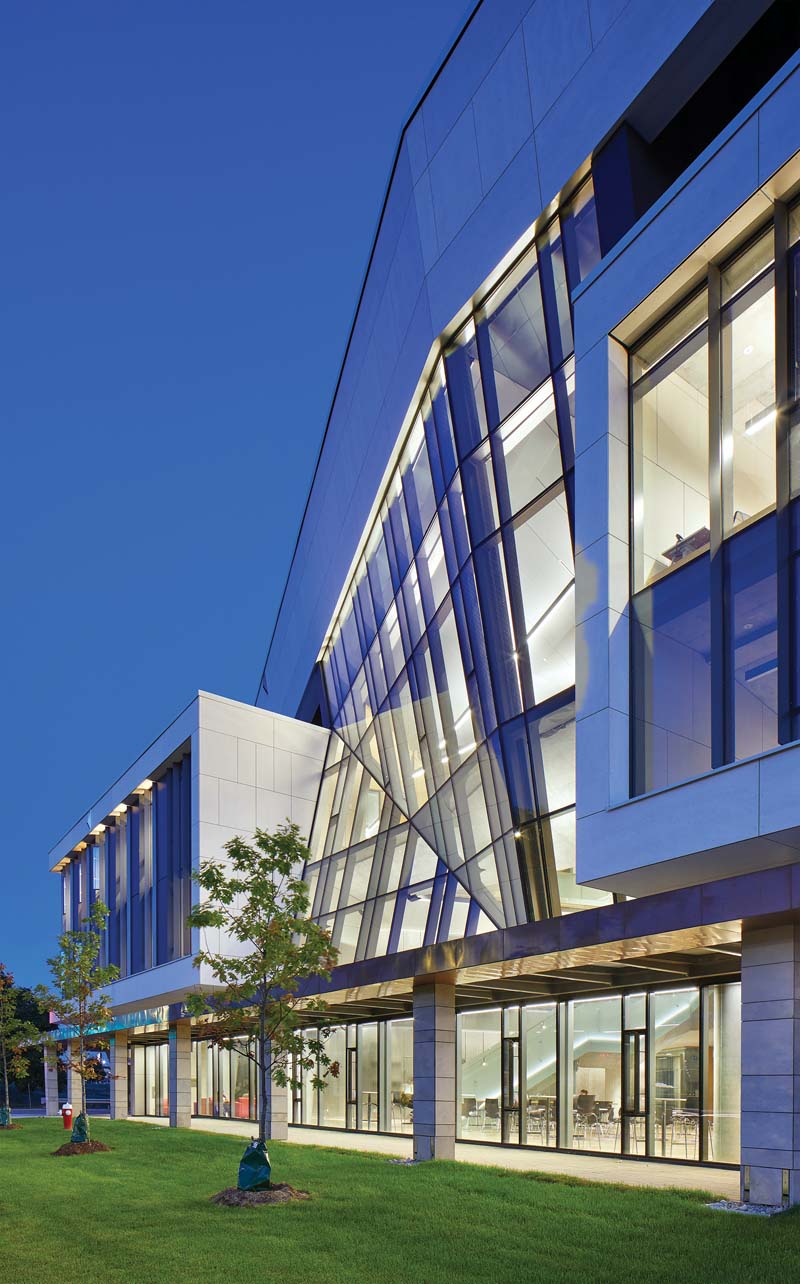 This choice of a more economical and less glamorous material captures the spirit of the project. It’s clear that Neuert, Dormody and their colleagues focused squarely on the building’s social, programmatic and environmental qualities. Their sensibility here is deeply modest, even self-effacing.

This was exactly what the clients asked for. McKellar says the faculty consciously chose to make the new facility feel like a separate building, rather than an extension of the Hariri Pontarini project. And yet, the Baird Sampson Neuert team deliberately adopted select details and materials to create a sense of continuity. The principal circulation route on the main floor is lined with the same limestone as next door; the wooden handrails on the principal stairs are patterned after those in the Siamak Hariri-designed building.

Baird Sampson Neuert’s own vocabulary of materials and details is quiet and competent. Quarter-sawn white oak lines doors, wall panels and air grilles. Concrete is exposed and polished wherever possible. The few bits of drywall frequently bear a purple-blue paint.

Neuert points to a set of oval concrete columns that are both tapered and rounded—a trademark Barry Sampson detail. Dormody shows me a bridge-like concrete structure above the social hub, which houses a special events lounge. Here, the architects worked closely with the engineering team to shape the concrete into a crystalline form, just massive enough to provide the necessary structural support and achieve a sculptural effect.

But what is all that concrete doing in a building focused on sustainability? After all, concrete production is hugely carbon-intensive, and this building is only four storeys at its tallest section. Concrete was chosen as a practical option, in part because the complex was originally planned to include an eight-storey residence tower. When design began in 2011, mass timber was not an option at this height. The tower was cancelled during design development, but York wanted to retain the existing design concept.

This does not detract from the enormous import of designing for net zero operational carbon—a target often named, but less often attained, and even more rarely with this level of design assurance. It will be another year before the McEwen Building’s performance can be fully assessed and measured; that will require the presence of people. However, university staff report a high level of satisfaction with the building so far, and have made sure that engineering and maintenance staff understand the quirks of the building systems.

All this reflects the sensibility of the late Sampson, who was a highly influential studio professor at the University of Toronto’s Daniels Faculty of Architecture, Landscape, and Design until his death in 2020. Sampson was a committed environmentalist, and believed that energy efficiency and human comfort were worthy concerns for architects, just as much as any formal or material ones. “That’s a truly ambitious approach to design,” Neuert says. It is an approach that is sure to last.

Alex Bozikovic is the architecture critic for The Globe and Mail.