During the last 15 years, there has been a renaissance in Canadian architectural publishing, supported by the efforts of the Canada Council and other funding agencies, private sponsors, and numerous dedicated journalists, scholars, curators and architects. In particular, the intrepid publishers must be commended. This includes stalwarts such as Douglas & McIntyre, newcomers like Figure 1 Publishing, and international houses such as Princeton Architectural Press. 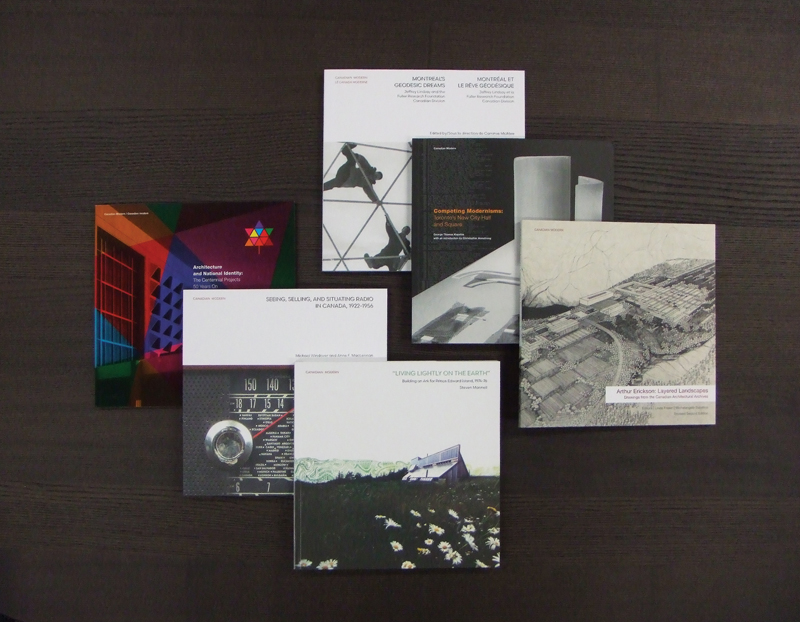 One of the key players in this vital landscape is Dalhousie Architectural Press, established over 35 years ago in Halifax, originally as TUNS Press. Landmark books by the press include Patkau Architects: Selected Projects 1983-1993 (1994), which did much to put Canadian architecture on the map. In 2013, the press began a series called Canadian Modern, overseen by Michelangelo Sabatino. Numbering six books to date, the series is effectively a set of exhibition catalogues that concentrate on archival material.

George Thomas Kapelos’s Competing Modernisms: Toronto’s New City Hall and Square (2015) and Steven Mannell’s “Living Lightly on the Earth”: Building an Ark for Prince Edward Island, 1974-76 (2018) provide detailed documentation of two crucial, and yet opposite, buildings in Canadian history. Kapelos’s book, which complements an exhibition held at Ryerson University in 2015, comprehensively presents the Toronto City Hall competition of 1958. He includes a fine essay on the history of design competitions in Canada (especially city hall competitions), along with spreads on the finalists and 50 other entries. What is missing is a more lengthy description and analysis of the winning entry, a building that has since achieved iconic status. Nevertheless, the book is a significant contribution to the study of Canadian architecture.

The same can be said of Mannell’s evocative book on the Ark for Prince Edward Island, produced along with an exhibition at the Confederation Centre of the Arts (2016-17). Opened in 1976, the Ark represented a remarkable experiment in environmentally responsive design and living—it was a true product of its time. Mannell provides much information on the genesis and life of the project, accompanied by many intriguing images. Sadly, the project met its demise in 1998.

The most unfamiliar story in the series is told in Cammie McAtee’s Montreal’s Geodesic Dreams: Jeffrey Lindsay and the Fuller Research Foundation Canadian Division (2017). Lindsay was a Montreal-born engineer who became enamoured with the work of U.S. inventor Buckminster Fuller. He established a Canadian arm of Fuller’s research outfit in 1949, and experimented with geodesic structures in the following years. Notably, he also provided structural design services for Erickson and Massey’s mall at Simon Fraser University, and the firm’s projects for Expo 67. Lindsay’s daughter donated her father’s notebooks, drawings, and photos to the Canadian Architectural Archives at the University of Calgary in 2014. The book was produced in conjunction with an exhibition held at the Centre de Design at UQAM in 2017, and provides a window on a little-known aspect of Canadian design.

Michael Windover and Anne F. MacLennan’s Seeing, Selling, and Situating Radio in Canada, 1922-1956 (2017) explores the early social and spatial territories of radio. The authors, an architectural historian and a communications historian, cover topics such as the modern architecture of radio broadcast stations, and the prominence of radio consoles in the sitting rooms of Canadian homes. The book accompanied an exhibition held at Carleton University in 2017.

The book that launched the series, Linda Fraser and Michelangelo Sabatino’s Arthur Erickson: Layered Landscapes—Drawings from the Canadian Architectural Archives (2013), presents drawings from the Arthur Erickson collection at the Canadian Architectural Archives. The material was showcased in a small exhibition designed by the Marc Boutin Architectural Collaborative and held at the Nickle Galleries on the University of Calgary campus in 2013. Featuring projects from 1953-1968, the catalogue’s highlights include pencil and ink renderings of the Stegeman House (1954), the Filberg House (1958), the Dyde House (1960), the Thomas House (1960), and the Graham House (1966). These are interspersed with drawings of larger projects from the period.

Arguably, the most important book published so far in the Canadian Modern series is Marco Polo and Colin Ripley’s Architecture and National Identity: The Centennial Projects 50 Years On (2014). Elegantly written, the text explains the history leading up to 1967, and documents key buildings across the country constructed to mark a most auspicious year in Canadian history. The publication matches an exhibition held at the Confederation Centre of the Arts in 2014. In this case, the subject deserves the treatment of a more extensive publication, as many of the projects remain institutions of provincial and national import.

Dalhousie Architectural Press continues to produce timely and important books in its recognizable 8” x 8” format. The quality of the books is generally high, although the format seems dated at this juncture. Nevertheless, the books contribute to an overall view of Canadian architectural culture that is essential to promote.

Graham Livesey, MRAIC is a professor in the Master of Architecture program at the University of Calgary.