An addition to a small-town Ontario arena creates a vibrant new community hub.

Context is typically a catalyst for architecture. But when the context is a standard-issue hockey arena and its adjoining box of a community centre, surrounded by acres of parking lots and playing fields, where’s the generating concept? That was the big question for Lebel & Bouliane at the outset of designing Clearview Public Library’s new branch in Stayner, Ontario, a small but rapidly growing town 100 km northwest of Toronto.

The answer, in a word, was: light. “We thought about how to create a space that generated the best light for the library’s needs,” says architect Luc Bouliane. With that thought, and some riffing on how the same type of standing-seam metal that clads the arena could be bent and twisted into something livelier than a straight-ahead shed, a modest but captivating library began to take shape.

Positioning the library east of the community centre and angled away from it, on the north/south axis, enabled the design team to work with the site’s full potential for natural light. At the south end, a deep, zigzagging canopy shields the entrance to a new atrium shared by the library and community centre. From this compact lobby, a view opens through the library to its glazed north wall, which spikes up to the west and faces onto farmland. To the east, large windows punctuate bookshelf-lined walls, offering long-range views of park space and playing fields. The northern exposure provides optimal ambient light for reading and study, while the windows along the east side bring morning sun into the children’s section, a lounge area with a fireplace, and the staff area.

Rotating the library away from the community centre created space for a line of west-facing clerestories, allowing late-day sunlight to stream in without causing glare. A dynamic roofline makes the library visually arresting from the outside and comfortably bright inside: three south-facing light monitors echo the arena roof’s peaked form and draw indirect light deep into the building.

Stayner’s snow-belt location also factored into the roof’s design—multiple slopes encourage the white stuff to slide off rather than accumulate. Pale, prefinished cedar cladding on the exterior walls contrasts cleanly with the dark roof; the cedar’s tactile surface, reminiscent of barn board, humanizes the toughness of the standing-seam metal.

All of this helps explain why the building—the first new-construction library designed by Bouliane after leaving Teeple Architects and establishing a practice with Natasha Lebel—received a 2021 Architectural and Design Transformation Award from the Ontario Library Association. But the Stayner Branch’s success also comes from how it handles larger shifts in this building typology.

Today’s libraries are so much more than book lenders and places for quiet study. They’re where people gather for everything from crafting sessions to ESL classes. They’re where an ex-convict might check in with her parole officer, or where teenagers might play video games with their friends after school. These needs require flexible spaces, with room for more people rather than more books. 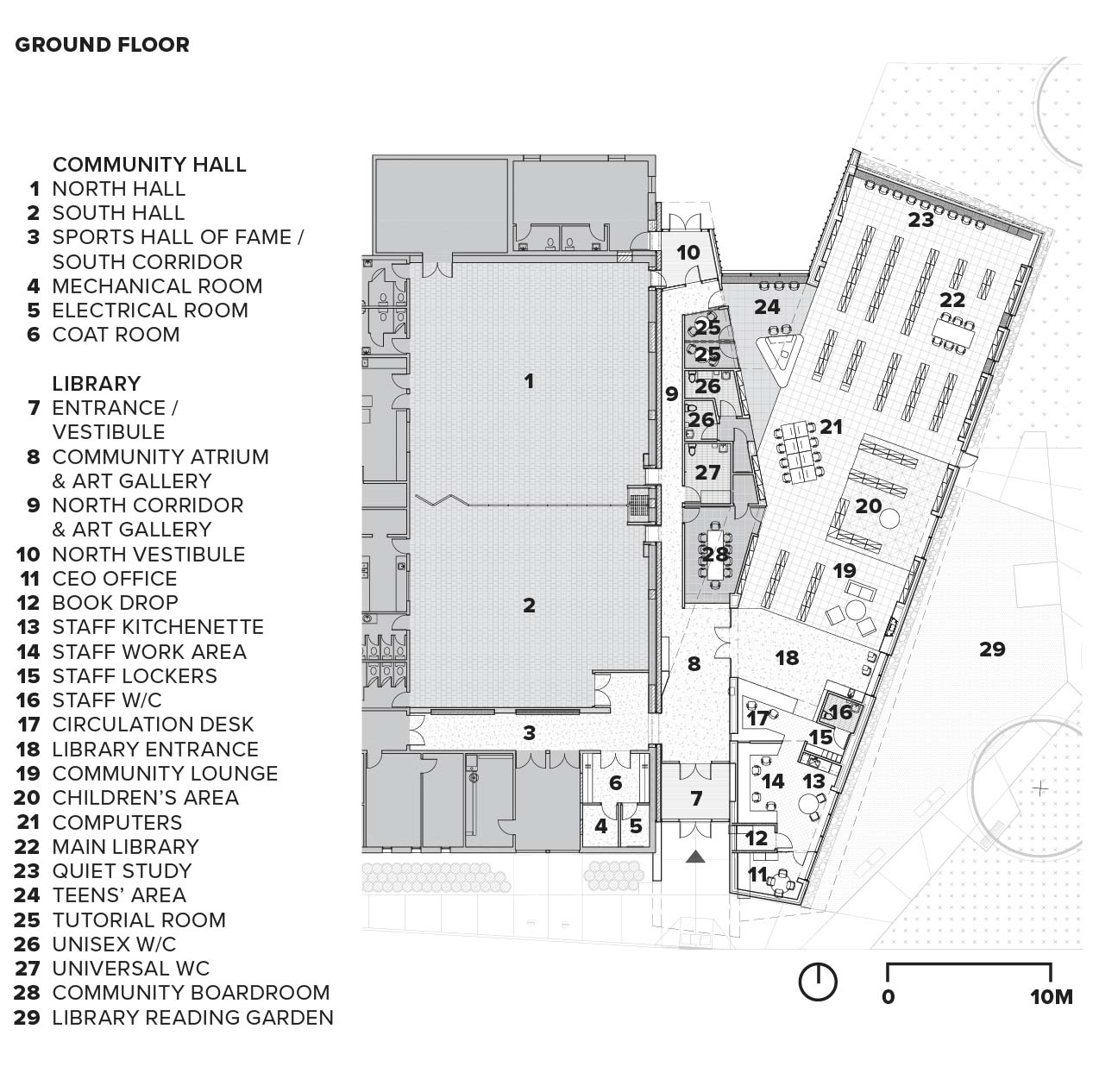 The new Stayner branch replaces a tiny downtown library with ineradicable, budget-hoovering condition issues. “The original concept the board looked at was putting up a two-storey building on the existing site, but the cost was going to be astronomical,” says Clearview Public Library CEO Jennifer La Chapelle. Relocating to the ex-urban site next to the community centre and arena was a fiscally responsible choice that enabled shared-use efficiencies. The library can hold its largest events, such as lectures, in community-centre spaces. And the new boardroom in the atrium is for library and community-centre use.

Due to factors including the digitization of media, accessibility requirements for greater between-shelves space, and a shift to lower-height stacks for improved sightlines, the Stayner branch’s physical collection is 25 percent smaller now than in its previous location, even though the new library is three times larger. La Chapelle says Lebel & Bouliane did an exemplary job of “listening to our concerns and ideas and turning them into a functional, visually appealing library.” The space allocation will continue to change over time. Bouliane believes that pressure on libraries to provide many different types of space for community use will increase. He designs libraries with an eye to facilitating the conversion of some collection space to community programming space five or ten years from now.

Stayner’s new library was nearing completion just as Ontario’s first Covid-19 lockdown commenced. Nearly two years later, operations revert to curb-side pickup when pandemic-related school closures occur, and at other times there’s a one-hour limit on library visits. Meeting rooms cannot be booked. The branch’s official opening has been postponed to May 2022. Bouliane is particularly eager to see how this library gets used when the pandemic retreats. Previously, whenever someone in the family had ice time, lots of Stayner kids and parents ended up, by default, in the arena. For many, this bright and accommodating new library will provide welcome alternative options to watching the home team chase the puck.

Pamela Young is a Toronto-based writer and communications manager.