It’s common sense to architects: better daylighting makes for better buildings. But then it quickly gets more complex. Does more daylight make people healthier? Can those effects be scientifically traced and quantified? Should minimum daylight levels in buildings be legislated? How is daylight best measured?

Those topics swirled throughout the two-day Velux Daylight Symposium held this fall in London, England. Manufacturer Velux sponsored the gathering, although their roof windows were barely mentioned
in the presentations by research scientists, architects and lighting designers. There was too much else to discuss.

“Daylighting spans from neuroscience to social science—it is no longer just about design,” said moderator Florence Lam, director of lighting design with Arup.

On the neuroscience end, the visual effects of light are well documented. Healthcare designers, for instance, often cite the idea that views of nature can improve health outcomes. “Our emotions and instincts are firmly rooted in living outside and observing the natural world,” explained Nick Baker, researcher at Cambridge University. Reviewing dozens of papers about what is seen from windows, he concluded that “daylight is more highly valued when associated with views of nature,” because these views carry complex information that human brains are eager to observe and process.

Researchers have also been studying the non-visual effects of light—that is, the way light simultaneously transmits information directly to receptors in the brain, bypassing the visual cortex. “Before our eyes register ‘oh, the sky is changing colour,’ our genes are affected,” said interior designer Deborah Burnett. Light is tied to our bodies’ melatonin production, along with affecting an alphabet soup of compounds, such as serotonin and dopamine. The most well known result is the regulation of the circadian system, which dictates the timing and quality of sleep. But these compounds are also related to a host of other
effects, including tumour suppression and mood.

Arne Lowden, a researcher from Stockholm University, noted that over half of Swedes suffer from seasonal affective disorder, tied to working indoors during the region’s short winter days. Increased exposure
to natural daylight, even by just 30 minutes a day, helps alleviate their circadian strain. “Extending natural daylight exposure seems to be an effective countermeasure to ill health,” said Lowden.

If daylight exposure is generally beneficial for health, exposure to artificial light carries attendant dangers. The LEDs that illuminate our electronic devices, in particular, can throw our circadian rhythms off,
as our bodies are particularly sensitive to blue wavelengths of light. In cities and beyond, light pollution is also common. “We’ve lost touch with real night and real darkness,” observed writer Paul Bogard.

What does this mean for designers? Or as one architect at the symposium put it, “How do you know where to put a hole in the wall?” At the basic level, there are some obvious planning choices, according to Victoria Revell, senior project manager at Surrey Clinical Research Centre. Blackout blinds on timers can help with regulating wake times. Daylight is particularly important in homes for the elderly, to help combat daytime somnolence. Red-tinted night lights—as well as screen settings for electronic devices—are preferable for evening use.

The type and quality of light is also important. Designers tend to work with light intuitively, but increasingly can wield sophisticated tools. Lighting designer Arne Hülsman described early years when his office included an artificial sky room, within which models could be placed and photographed to understand daylighting dynamics. Now, advanced computer simulations do the same job. “Clients do not understand numbers, but they connect with models and simulations,” he said. He’s consulted on projects including the glassy Hamburg airport, which incorporates a glare-cutting dynamic shading system, as well as a Velux model home in Germany, equipped with generous glazing for gathering 6% more daylight than the norm.

Architect Yehao Song referred to Chinese vernacular architecture for cues on how to balance between daylight, heating and cooling in his contemporary designs. There are many climate zones in China, he pointed out, each with its own particularities. For a duck pavilion in Beijing, which has hot, humid summers, he paired skylights with a wind tower to encourage natural ventilation. For a barn-like building in the temperate Guizhou province, he employed local craftsmen to create woven rattan façade panels that could be layered in different ways. The panels serve as sunshading over windows and are strategically placed to modulate solar gain over the rest of the façade. Skylights were given a playful touch with coloured films, creating a rainbow of light across the interior. 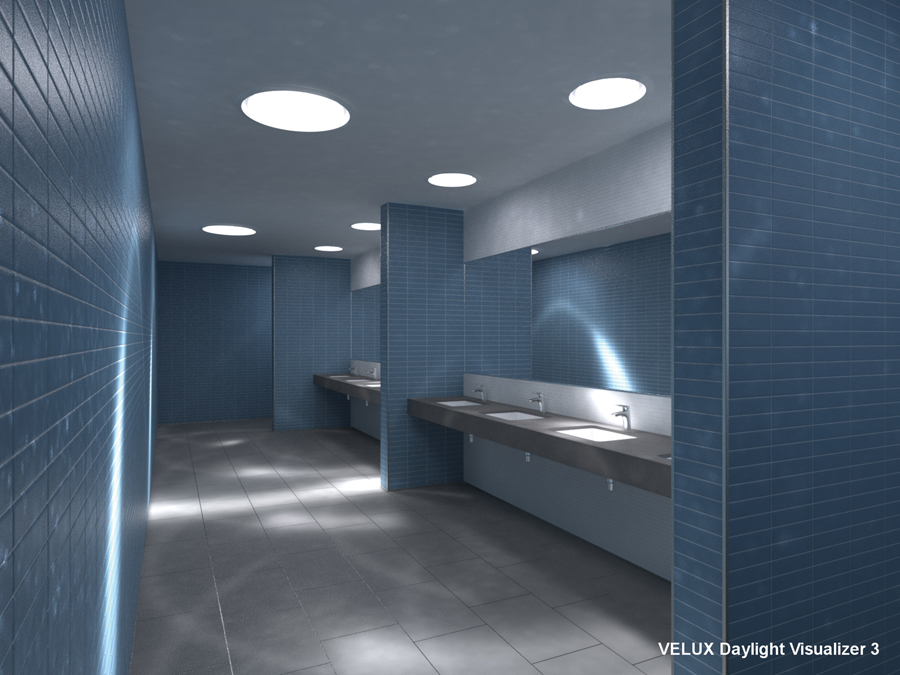 Tech-savvy architects can take advantage of several advanced tools for daylight design. The Velux Daylight Visualizer, a free download, produces renderings as well as analytics from imported CAD and SketchUp models. Its lead developer, Henrik Jensen, explained that particular care was taken to ensure that light coming through sun tunnels—with their reflective internal surfaces—was accurately simulated. The tool
is a pared-down version of Luxion’s KeyShot, a rendering engine that is widely used in product design (most of the images in your Ikea catalogue were rendered using KeyShot, said Jensen). This software could prove valuable for architects and interior designers, particularly for its sophistication in rendering translucent materials. 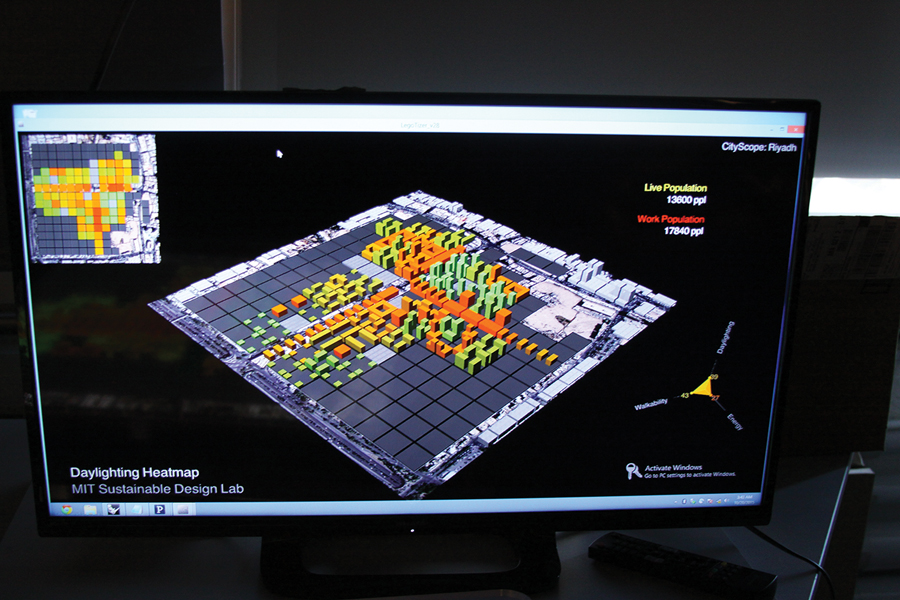 Christopher Reinhart of the MIT Sustainable Design Lab brought the discussion to an urban scale. His research group developed tools to efficiently analyze daylight penetration at a neighbourhood level. Their prototypes dispel the notion that increased density necessarily results in reduced daylight. “Depending on the typology, you can get floor areas up to 25 FAR with good daylight conditions,” Reinhart said. To make their research more interactive, they’ve prototyped a city-building Lego board, with interactive projections that inform builders how their designs measure up in terms of walkability, daylighting potential and embodied energy use.

Ultimately, one of the most convincing arguments for the value of daylighting was the venue itself, a space flooded with natural light. Tobacco Dock, in East London’s Docklands, was constructed in 1811 as a warehouse, and converted into a shopping centre in 1990. The centre never took off, and now, it serves as a film set and event venue.

Overhead, oak beams supported a vaulted roof with a continuous line of glass lanterns. The event team added white fabric baffles, cutting glare and allowing for projection screens to function in co-existence with the natural light. It was a refreshing contrast to the stuffy, windowless rooms that are the norm for conferences. The sunlight made it feel good to be there. In the end, isn’t that what it comes down to?

Research for this article was conducted during a trip sponsored by Velux. Velux did not review or approve the content of this article.

Covid-19: A push for sustainable construction

Over 1000 Canadian and international artists will participate in the Festival featuring over 250 exhibitions and programs throughout May in the greater Toronto area. The work of artists

Over 1000 Canadian and international artists will participate in the Festival featuring over 250 exhibitions and programs throughout May in the greater Toronto area. The work of artists participating in the 2020 Festival expose physical, emotional, and environmental scars that reflect the fragility of our times. Among the artists showing at the Festival for the first time this year are:

Assistant Professors Trevor Butler and Veronica Madonna will be presenting their shared experience in mass timber design in the next Global Studio Lecture Series on Wednesday May 27, 2020 at 9am MT. Mass Timber is quickly emerging around the world as a main building material because of its inherent low carbon characteristics and ability to have a positive impact on the environment.

The lecture will provide an architectural and sustainable design perspective on using mass timber as a main building material and the advancements in Canada and around the world. Trevor and Veronica will explore the opportunities and challenges that are faced in designing with mass timber today and their thoughts on the future of the building industry.

Hosted by RAIC Centre for Architecture at Athabasca University

Participants who attend the full 90-minute session will be granted a Certificate of Completion to apply for professional development credits recognized by the following institutes.