Brigitte Shim and A. Howard Sutcliffe announced as the recipients of the 2021 RAIC Gold Medal

The Gold Medal is the highest distinction the Institute can bestow in recognition of a significant and lasting contribution to Canadian architecture.

The RAIC is honoured to award the 2021 Gold Medal—the highest distinction the Institute can bestow in recognition of a significant and lasting contribution to Canadian architecture—to exemplary architectural duo Brigitte Shim and A. Howard Sutcliffe. 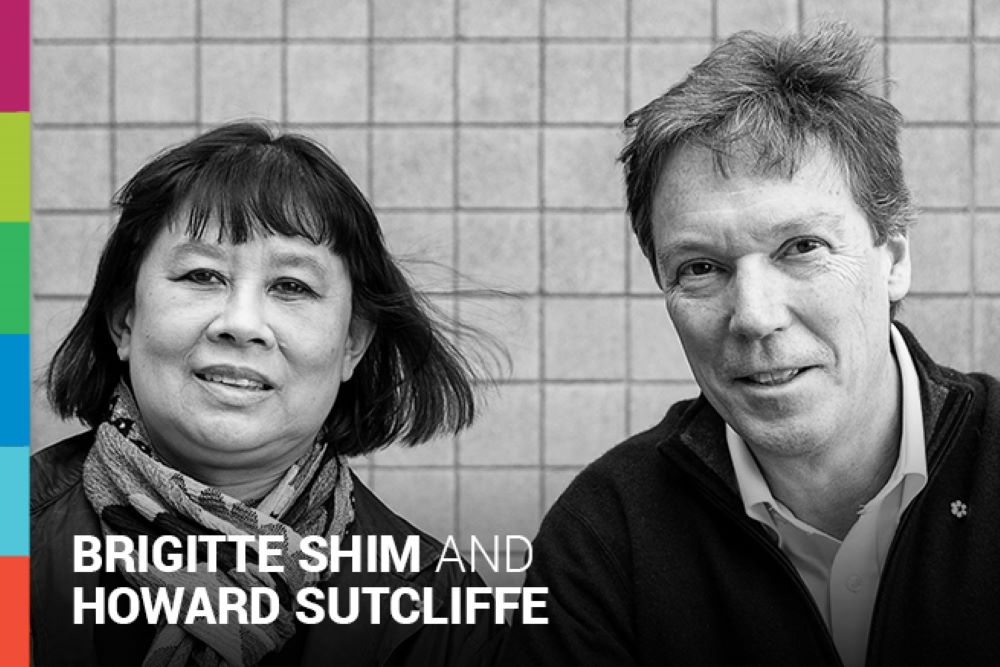 Architects Brigitte Shim and A. Howard Sutcliffe are the founding partners of Shim-Sutcliffe Architects. Their work expresses a deep concern for the cultural and spiritual significance of architecture, landscape, and design. To date, their built projects have been recognized with fifteen Governor General’s Medals for Architecture and an American Institute of Architects National Honor Award, along with many other professional accolades.

“Over the past quarter of a century, these architects have made an absolutely fundamental contribution to Canadian architectural culture, and the fifteen Governor General’s Medals for excellence that they have received over the past 25 years surely testifies to the consistent caliber of their practice,” writes historian Kenneth Frampton. “In my view, Shim-Sutcliffe are among the top 20 architects practicing in the world today.”

Born in Kingston, Jamaica, Brigitte Shim emigrated to Canada in 1965. She met Sutcliffe at the University of Waterloo, where both graduated with degrees in environmental studies in 1981 and architecture in 1983. In 1981, Shim also began apprenticing with architect Arthur Erickson in Vancouver. Upon graduating, she worked with Baird/Sampson Architects in Toronto (1983-87) and began teaching at the University of Toronto in 1988.

Shim is currently a Professor at the John H. Daniels Faculty of Architecture, Landscape, and Design at the University of Toronto, leading courses including core design studios, advanced design studios, and many elective courses. She has been an invited visiting professor at Yale University’s School of Architecture, The Cooper Union, Harvard University’s Graduate School of Design, The École Polytechnique Fédérale de Lausanne, and the University of Auckland, among others.

Shim and Sutcliffe are unwavering design advocates who have both served on numerous international, national, and local juries. Brigitte Shim has served on many committees in the fields of design and architecture, including the board of Build Toronto, the National Capital Commission’s architectural advisory board, and the Waterfront Toronto Design Review Panel. She has been on the editorial board of Praxis – a journal of writing and building and ARQ – Architecture Research Quarterly. In 2007, she served on the Aga Khan Award for Architecture Master Jury, and subsequently has served on the Aga Khan Award for Architecture Steering Committee.

A. Howard Sutcliffe was born in Yorkshire, England, and emigrated to Canada in 1964. After graduating from the University of Waterloo with degrees in environmental studies (1981) and architecture (1983), he worked in the studios of Ronald Thom (1984-85), Barton Myers (1985-87), and Kuwabara Payne McKenna Blumberg Architects (1987-95). At these firms, he contributed to international and national competitions, and built projects including Kitchener City Hall. In 1991, Howard Sutcliffe was the inaugural winner of the Canada Council’s Ronald J. Thom Award, given for early design achievement.

Shim and Sutcliffe have collaborated since 1983. Early built works include an architectural garden in Don Mills (1988-89), a house on Horse Lake in Haliburton, Ontario (1989-91), and their own residence—the Laneway House in Toronto (1991-94). All three of these works were recognized with Governor General’s Medals in Architecture.

Occupying a formerly derelict site, Shim and Sutcliffe’s own house showcases the duo’s ability to look beyond the current condition of sites to see their hidden potential. “The transformation of marginal urban sites is an important part of our practice,” write Shim and Sutcliffe, describing how such a strategy also applied to later projects on apparently banal sites, including Ledbury Park in north Toronto and Bet Ha’am Synagogue in Portland, Maine.

Shim and Sutcliffe established their practice, Toronto-based Shim-Sutcliffe Architects, in 1994. Their first work as a firm includes the Craven Road House, a combined residence-workspace for a budget of $100,000 in Toronto; Ledbury Park in north Toronto; a boathouse on Lake Muskoka; and the Moorelands Camp dining hall at Lake Kawagama. Their work has ranged from projects for non-profit groups to public and private clients. Works in Toronto include the Robertson Davies Library and St. Catherine’s Chapel in Massey College at the University of Toronto, the Corkin Gallery in the historic Distillery District, a gallery design for the Frum Collection of African Art at the Art Gallery of Ontario, the Integral House, the Residence for the Sisters of Saint Joseph, and just north of the city, the Wong Dai Sin Temple. They are currently realizing projects in North America, Russia, and Hong Kong.

These works are all distinguished by their attention to detail, with Shim and Sutcliffe frequently designing bespoke hardware and fixtures for their work, and collaborating with local craftspeople to realize their vision. As their repeat clients Gerald Sheff and Shanitha Kachan describe it, since their very first projects, Shim and Sutcliffe have consistently exhibited “a very high standard of design, sensitivity to building in harmony with nature, scrupulous attention to every last detail, and meticulous concern for execution.”

“Brigitte and Howard are architect’s architects,” writes architect Brian MacKay-Lyons. “In my view, theirs is one of the few Canadian architectural firms whose work consistently enjoys the respect of the architectural community worldwide.”

Furniture designed by the firm includes the HAB chair and table, manufactured by Neinkämper and recipient of the Chicago Athenaeum and Museum of Architecture and Design’s Good Design Award.

“For more than 30 years, [Shim and Sutcliffe] have worked to the highest standards of design and execution of building and landscape—fifteen Governor General’s Medals is no small accomplishment!” writes architect John Patkau. “Brigitte Shim and Howard Sutcliffe have created a truly outstanding body of work which they will continue to expand in years to come. This accomplishment is a gift of great value to Canadian culture.”

“The poetic quality and independence of their design work, their thoughtful and holistic consideration of site, materiality, typologies, the senses, and their inventiveness have made Shim and Sutcliffe exemplars of architectural practice in Canada,” writes Phyllis Lambert, Founding Director Emeritus of the Canadian Centre for Architecture. “To me, it is clear that they are abundantly worthy of being awarded the Gold Medal of the RAIC and stand as strong exponents of Canadian values.”

Brigitte Shim and A. Howard Sutcliffe are Fellows of the Royal Architectural Institute of Canada (FRAIC), Honorary Fellows of the American Institute of Architects (Hon. FAIA) and elected members of the Royal Canadian Academy (RCA). In January 2013, Brigitte Shim and A. Howard Sutcliffe were both awarded the Order of Canada, “for their contributions as architects designing sophisticated structures that represent the best of Canadian design to the world.”