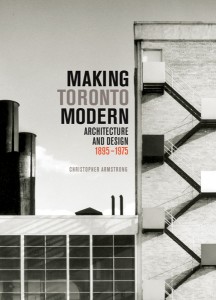 Not since Eric Arthur’s Toronto, No Mean City has an author succeeded in constructing a similarly comprehensive narrative about the forces at work that shaped the city’s architecture. Author Christopher Armstrong presents a detailed description of events and personalities, tracking changes in architectural form in Toronto. His research is impeccable and he displays remarkable insights into the rationale behind building processes, client requirements and design decisions.

However, by choosing to highlight historical data and events, the larger cultural story sometimes takes a back seat. The sheer force of Modern architecture—the presence of wave upon wave of new buildings and their influence on the city’s image and on its citizens—remains largely unexplored. Modernity changed the way Canadian cities looked. Moreover, it impacted the lives of ordinary citizens and the attitude of our profession towards innovation.

Making Toronto Modern is an ambitious undertaking and would be a welcome addition to any architect’s library. But there are many more stories to be told about the onset and impact of the Modern. Telling these stories remains an important challenge, especially given the pressures exerted upon the stock of Modern buildings now being considered for demolition. For this reader, Making Toronto Modern makes evident the need for broader architectural histories that build from Armstrong’s meticulous work: narratives that give voice to the spaces, places, monuments and everyday experiences that architecture creates. Such histories will provide exemplars for our profession to continue insisting on innovative, high-quality architecture with the power to impact the daily lives of Canadians. 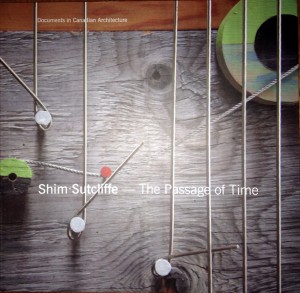 Since setting up their practice in 1987, Brigitte Shim, FRAIC, and Howard Sutcliffe, FRAIC, have garnered 12 Governor General’s medals for their work. These accolades—whose quantity outstrips the number of staff—recognize the firm’s attention to detail at every step, from a building’s solar orientation to the crafting of each door pull.

This slim monograph offers a compelling case study of two intimate projects: a city dwelling and a waterfront cabin that Shim and Sutcliffe have built for their personal use. “Our own house in Toronto and the Harrison Island Camp at Georgian Bay are personal experiments,” they explain in the book’s main text, compiled from conversations with the editors. “They have enabled us to explore and test a range of issues.”

The Laneway House is a manifesto on how the couple wanted to live in the city: they rehabilitated a derelict urban site, carving out a compact sanctuary complete with a fireplace, courtyard and fountain. The Harrison Island Camp is a two-room summer dwelling that sits lightly on adjustable steel jackposts bolted to the exposed Canadian Shield bedrock. A minimum of components—an industrial greenhouse ridge skylight, SIP panels, art made from construction waste, and the necessary insect screens—are meticulously assembled in thoughtful ways. Both projects act as a testing ground for new techniques the firm plans to introduce to its work for other clients.

The Toronto Laneway House garnered a Governor General’s Award in 1994, but the couple continues to modify it: its elegant handrail, made of a wrapped steel sheet that seems to emerge from the wall plane, was designed and installed in 2011. Architects’ work, particularly when it comes to their own dwellings, is never finished. 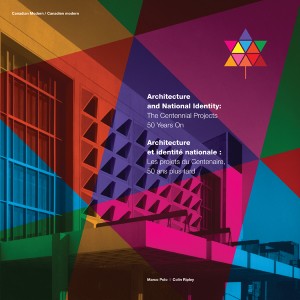 In Canada, 1967 meant more than than it did elsewhere. Not only was it the summer of love, it was the year a country came to love itself. Celebrating its Centennial, the nation had a new flag, a young and charismatic Prime Minister, and Montreal hosted an international exposition par excellence.

While the architecture of Expo 67 has been well explored, the built legacy of this moment is broader and includes the hundreds of projects funded by centennial grants and memorial programs. It’s this pan-Canadian heritage that is examined in this book. The text doubles as an exhibition catalogue, a companion to a show of the same name recently staged in Charlottetown. The book does an admirable job condensing its major themes. Foremost is exhibition co-curator Marco Polo and Colin Ripley’s introductory essay, which argues persuasively for the cultural impact and distinction of the Centennial buildings. Mostly spaces devoted to the arts, these projects form an impressive collection. Architecture and National Identity presents over 20 examples in entries that are brief but compelling.

This was a constructive endeavour of a scale rarely found in Canada’s history. The buildings that resulted were largely responsible for introducing Modernism to Canadian cities in a big way and serve a vital role in this country’s architectural culture.

The slim tome’s lone shortfall is its brevity. One simply wants more: an exploration of how these facilities fostered the arts, a look at their urban impact, a full list of centenary projects. Yet it is an invaluable and pioneering contribution. As the country’s sesquicentennial approaches, let’s hope it serves as an inspiration as we consider how we might once again commemorate an important national anniversary.

Jeffrey Thorsteinson is a writer and researcher with the Winnipeg Architecture Foundation.