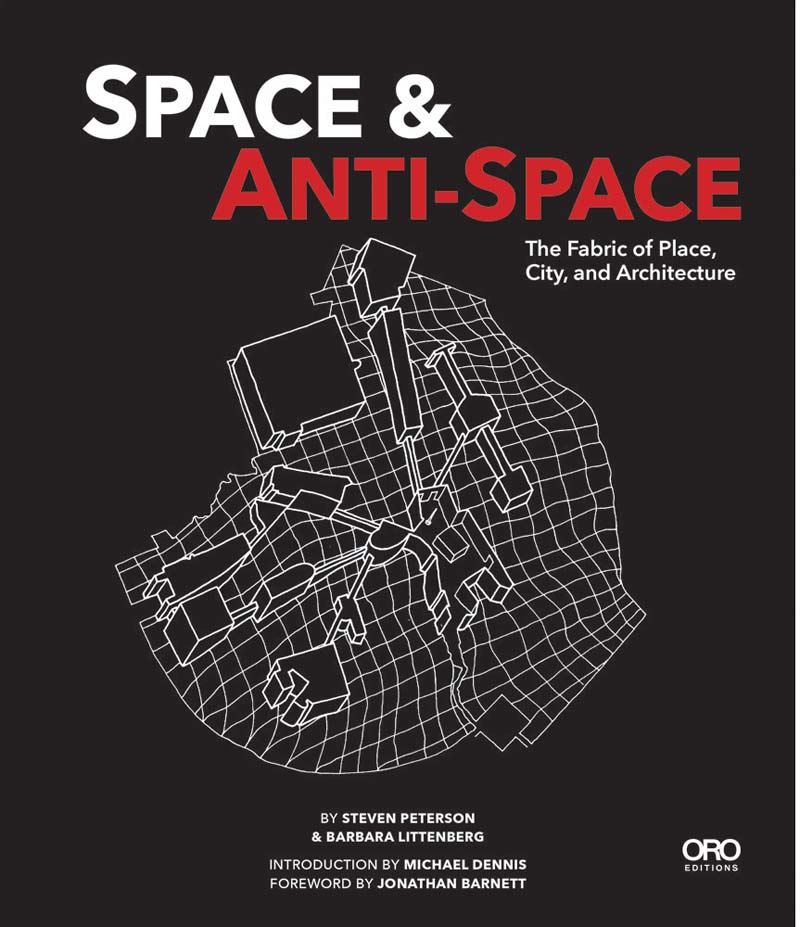 Space and Anti-Space: The Fabric of Place, City and Architecture

“I regard the revival of the city as far more important than any survival of Modern Architecture [because] the object-building interpreted as a universal proposition represents the demolition of Public Life.” -Colin Rowe

Steven Peterson was a student and later a colleague of Colin Rowe, and Peterson Littenberg’s urban projects are greatly influenced by Rowe’s views on the city. This book is a series of essays on architecture and urban design, culminating in Peterson Littenberg’s proposal for the World Trade Center site in New York City. The theme of Space versus Anti-Space is first directed to the conception of architectural space, comparing the relative plasticity, poché and configurative nature of works of architecture as diverse as Borromini’s San Carlo Alle Quattro Fontane and Louis Kahn’s Erdman Hall, to the relatively unconfigured free plans of Le Corbusier and Mies van der Rohe. (There is an entire chapter dedicated to Mies.)

The authors then address the Space/Anti-Space theme as it applies to the urban fabric. This section starts with a comparison of two similarly configured peninsulas—New York City’s Lower Manhattan and Shanghai’s Pudong. Manhattan has a rich infrastructure of streets and blocks, some dating from the 17th century (Space) while Pudong is a total urbanistic failure with its towers in a largely residual and undifferentiated ground plane (Anti-Space).

As one who has felt a thrill in experiencing some of Corb’s free plan buildings but has found the urban design aspirations of Ville Radieuse and Plan Voisin to be anathema, I find the Space/Anti-Space arguments more compelling with respect to the urban fabric. Indeed, the authors state that “the forms of the ‘traditional city’ and ‘contemporary architecture’ are not mutually exclusive. It is false to assume that the context of city form inhibits architectural expression […] urban design is a distinct and important discipline that is both connected to and independent of architecture.”

The book contains richly illustrated documentation of proposals the authors have made for Rome, Paris and New York, but unfortunately excludes their 1990 competition-winning Cité Internationale proposal for Montreal. Their work rightly prioritizes the space between, and that is no more apparent than in their proposal for the World Trade Center site in New York. As one of the original firms invited to make proposals for the rebuilding of the site, they saw it as an opportunity to “restore the lost urban quality of Lower Manhattan at street level and thereby remediate the failings of the Yamasaki super block design.”

Alas, there were those including Herbert Muschamp of the New York Times who thought that these early schemes were boring and that the problem was one of architecture, and in need of star architects to solve. The result of this pressure—as well as pressure from the developer and victims’ families—led to an invitation to the architectural elite to participate in a design competition.

Peterson Littenberg was the one holdover from the earlier group to be included in the seven teams selected. Their proposal was all about streets, squares and promenades—the lifeblood of the city—whereas most of the others, including Daniel Libeskind’s winning scheme, were about architectural objects in a continuous, undefined free space without the benefit of base buildings creating street walls. The resulting World Trade Center project, as built with its collection of singular objects, has the characteristics of Pudong or its neighbour to the north—Hudson Yards, which the current New York Times architectural critic Michael Kimmelman in a scathing review described as epitomizing “a skin-deep view of architecture as luxury branding. Each building exists to act as a logo for itself.”

Peterson Littenberg recognizes the spatial and morphological values of the traditional city while accepting the necessity of tall buildings as an urban type. The lodestar for their World Trade Center proposal was Rockefeller Center, perhaps the most accomplished urban space in North America. Like Rockefeller Center, their World Trade Center proposal, unlike most of the others, accommodates tall buildings while also integrating with and extending the urban fabric of the surrounding area.

This book mounts a strong defense of the discipline of urban design at a time when the redemptive power of iconic architecture sometimes gets in the way. In 1956, although it applies equally today, Josep Lluis Sert said, “In a period of a cult to the individual and to genius, with all due respect to genius, it is not to them that we owe our best cities.”

Voices of the Unheard: Making injustices inherent in architectural education and practice visible